Age 54
Negaunee, MI
Ishpeming Ski Club
It’s back in the early 90s and I’m the only one jumping Suicide Hill on a real windy day. Coy Hill and Ralph Bietila are flagging the wind for me and Don Lilijuiquist is also on hand. My Dad always said that if it was windy I could trust Coy and Ralph to flag the wind. They knew how it worked on Suicide.
I had two jumps in and they were about as scary as they get. I’m on the bar start for my third jump. Yokie doke I yell. Long pause then Coy screams OKAY. Immediately Ralph hollers, NO, WAIT, NOW. Boy, I had another dandy, eay.
By the time Coy came down in his truck to drive me up for the fourth jump my skis were on top of my car.  I’m sure those guys even got a big kick out of the mediocre jumpers givin ‘er heck. 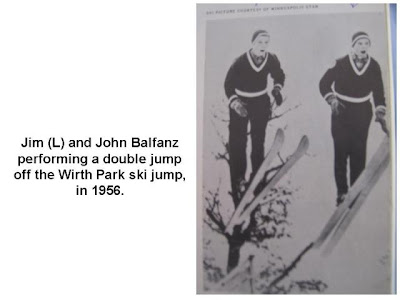 This is a picture which appeared in the Minneapolis Star Tribune back in 1956. The photographer had been to a jumping competition the week before when John and I did a double jump to open the tournament. We did that frequently before very large crowds at Theodore Wirth Park. On this jump, Maynard Erickson, who maintained the ski jumps, was in the transition when John and I came over the knoll. He was waving a rake to make appear as though we were going to land on him. It was all in good humor, but you can tell by the look on our faces that we thought we were going to land on him.

There were many great junior jumping events sponsored by Franklin Coop Dairy each winter, which raised the level of competence among the many good ski jumpers from Minneapolis and St. Paul, and which also brought junior jumpers from Duluth and Glenwood as well.

Ed Brisson was one of the outstanding jumping coaches who was always available to coach anyone wanting advice.

Editor’s note- When asked for age and details, Jim responded:

I am now 72 years young, still skiing. Live in Stockbridge, MA. and skied for the Minneapolis Ski Club and Western State College.

When I interviewed to become the first full time Nordic Program Director in June,1970, I laid out a plan to begin to bring the Nordic program up to the competitive level of the best Nordic nations. With Marty Hall, John Caldwell, Steve Williams, Ed Brisson, Lloyd “Snowball” Severud and others, we set the “wheels” in motion for international excellence. I had gone out and raised large sponsorship $$$ for what became the Samsonite Nordic series. Set up the first “broken time” payment system for our best Nordic skiers; set up the Nordic equipment program with various companies, and along with our great coaching team established the idea that excellence in international competition was to be our number one goal.

I was able to get our jumpers great exposure on CBS Sports Spectacular, where I did the color commentating with Brent Musburger and others for some great jumping events, including the Samsonite Ski Flying Championships at Ironwood.

I remember being in my hotel room in Chicago, during the 1976 Olympics when Kochie won the silver medal. But we should have medaled in jumping, and ladies cross country as well.

I will never regret giving everything I had to our Nordic program and can remember locking horns with some domestic tournaments regarding funding for our US jumpers for their competitions. They finally realized I meant what I said and ponied up for our guys. So many memories of working with some great athletes, coaches and ski clubs.