December 18, 2012
STORY No. 59
GENE KOTLAREK
Age 72
Colorado Springs, CO
Duluth Ski Club
The story project sure brings back memories.  Then came Glen Nelson’s episode and I thought it might be interesting for some of the “old farts” to add some experiences.
·         A junior in high school, out for much of the season with a broken collar bone, then a last minute entry to the Junior Nationals in Reno, NV in 1957 and my first National title.
·         The whole gang goes to Leavenworth for the Nationals in 1959 and I scored 4 20’s out of 5 judges.  Yes, the Junior A title.
·         After Hollmenkollen in 1960, with the Norwegian Team, Ansten Samuelstuen and I went to Planica for ski flying.  On my first try I tripped coming out of the gate and fell on the in-run!  Score 0.  After three days finished 4th.
·         In 1963 in Steamboat, bought some new Northlands from “Bullet” (John Balfanz).  Beat him!  National title and hill record for Steamboat and USA.  Hollmenkollen after that; John was 3rd, I was 4th… but a Hollmenkollen hill record for 2 hours!
·         In 1967 got lucky again and beat the “Bullet”.  Went to Westby and ended my career with a practice ride too far, a crash and an ankle so dislocated that Doc Bland thought he might have to cut it.  Oh well!  Funny… one year later the same hill ended the career of the “Bullet”.
·         Finished as head coach for two years.  Toughest job yet.
·         A luncheon event with the King of Norway; the quiet lunch with Marshal Tito of Yugoslavia; Wide World of Sports interviews; who can complain.  Thanks for the memories.

Editor’s note-  This came in later from Gene- Leading a business finance and bank relations company out of Colorado Springs.  President out going  for  U.S. Olympians Assoc.(alumni).  Ski for Keystone;  play golf in the  mid  80’s. 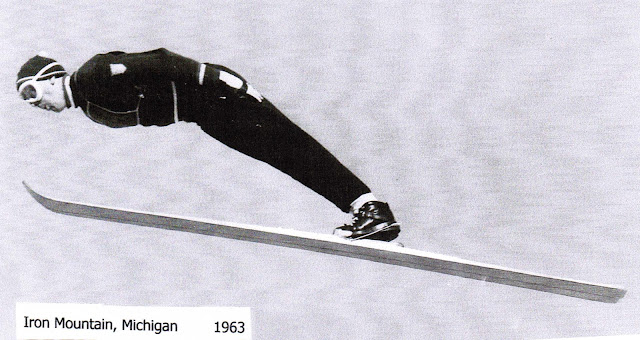 Editor’s note (2)- I couldn’t resist highlighting Gene’s boots in this photo.  Incredible to look this perfect with so light a boot.  It appears he took good care of his equipment, too.  Nice spit shine! 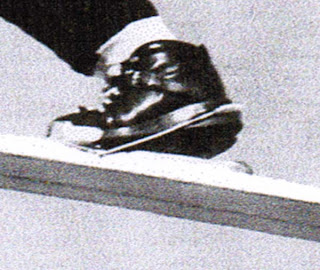