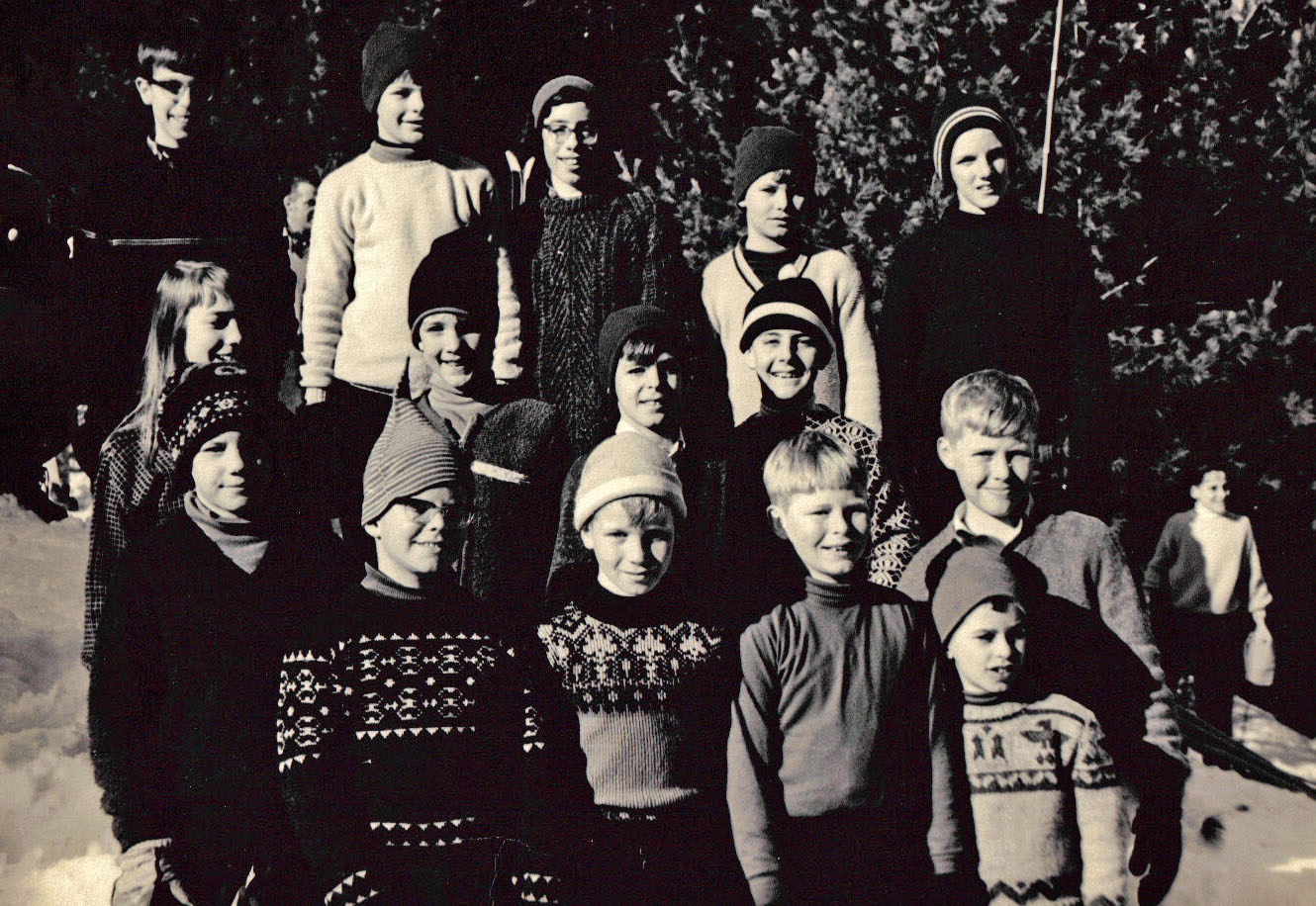 Photo of 1966 Ford Sayre Carnival winners
Front row (7-9 year olds): Jon Farnham, Peter Knights, Walter Malmquist, Robert McLaughry, John Fulton
Middle row (10-11 year olds): Bron Bradley, Peter Guest, Rolf Bernirschke, Buddy Stacy, Charles Grant
Back row: (11-14 year olds): Steve Bernirschke, Chris Nice, Tim Rieser, Tom Fulton, Rick ColtWALTER MALMQUISTAge 57Bradford, VTFord Sayre (1966-1969), Lebanon Outing Club (1970-1971), Holderness School (1972-1974), Dartmouth Outing Club (1977), United States Ski Team (1974-1981), US Olympic Winter Teams (1976 & 1980)wmalmquist@kingcon.comIn 1962, as a first grader, I finished my third session of ski jumping with the Ford Sayre kids on a small hill in a pasture next to the K20 meter Samples Hill in Norwich, Vermont.  I hitched my skis in the ski rack of top of my Mom’s car, opened the car passenger’s side door, got in, and pulled the door shut behind me.  I looked at my Mom briefly, closed my eyes, leaned forward, put my forehead on the dash, and started to sob.  My tears dripped from my cheeks to the dash and flowed to the car floor. Mom put her hand on my shoulder, gave me a rub and a pat.  She asked me what was wrong?  After a few moments without an answer from me she asked me if I had hurt myself.  Without looking up, still sobbing, I assured her that I had not.  She persisted to determine why I was crying.  I tried to collect myself, but I could not.  I really didn’t want to show her or anyone else this side of myself and I really didn’t want to tell her why I was crying… so, now utterly humiliated, I continued to sob with my forehead on the dash and I didn’t say a thing.  Mom recognized that I could not respond at that point in time and gave me another rub on the shoulder without saying anything then started the drive home. The drive home over and through the twisty, hilly back roads of Vermont took about 30 minutes.  About halfway home I finally composed myself enough to talk with my mother.  I told her that I really wanted to jump but that I couldn’t make it off the end of the jump.  I told her that I believed that I knew how to ski pretty well but for some reason my skis would find a way to miss the take-off four or five feet to the left or I’d fall before I reached the end of the in-run.  I told Mom that Mr. Condict, my first coach, was very nice and helpful to me; but I just couldn’t seem to do what he asked me to do. I confessed that I was a chicken. I told her that I didn’t know whether I should go back to the hill again. Mom smiled and then told me that it was up to me.  “If you want to, you should.  If you don’t want to, you shouldn’t.  It’s up to you.” By the time we got home I figured out that it didn’t matter to Mom that I was a chicken and I made peace with the world. I know that neither my mother nor my father had any feelings one way or the other regarding whether I’d become a ski jumper.  I also know that they both gave me the freedom and opportunities to pursue the sport to the fullest extent I was able with their full encouragement and support.  They helped me get to practice sessions and competitions… they helped me with equipment and clothes… they gave me lots of pats on my shoulder… they always encouraged me and helped me pursue the goals I set… they always looked forward to the next event and the next steps.  Their support, their encouragement, and their confidence gave me what I needed to return to the hills to do the things that were unimaginable to me when I was a kid… to put my skis on… to get off the take-off… to fly through the air… to throw a landing… to make a bunch of new friends… to regain and maintain my self-respect. I didn’t cry about ski jumping again until 1980 when I completed my competitive career. Fortunately, while it took longer than a car ride home, I eventually recovered from that too