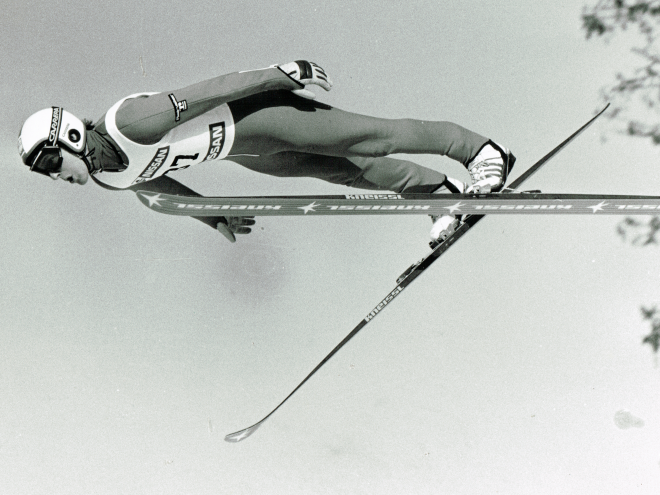 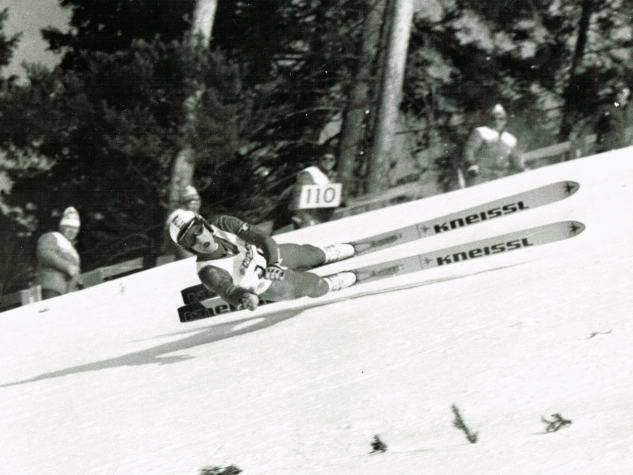 Prepping for the long slide.

DENNIS McGRANE
Winter Park, Dartmouth Outing Club
Olympic Team ’84 & ’88
Boulder, CO
dennis@mcgranewater.com
One of my most vivid memories was the 1983 World Ski-Flying Championships in Vickersund, Norway.  It was Day 3 and I wanted to really nail one on the last competition day having come in a respectable 28th  and 27th in the first 2 days.  The inrun was crazy steep and we had to use bar starts which means we had to put our skis on  a 2” x 6” balanced perpendicular to the track behind two 4 foot bars with handles that were mounted either side of the track below the lowest ski-in start.  Holding onto both bars, we had to push our skis up the inrun while turning our skis into the track.  With my feet behind and slightly above my head because of the steep inrun, only adrenalin kept me from passing out while waiting for the flag man, arms-a- shakin’.   As I released the bars and pulled my hips underneath me into the tracks, I weightlessly accelerated on the icy, skatey track toward the banana transition where I tried my best to get in a decent inrun position before the takeoff.   From behind, I dove onto my boards and my right ski immediately bounced off my chest, recoiling downward, catching air on top.  Oh crap!  My brain screamed “don’t tip over, don’t tip over,” but my momentum rotated me beyond the point-of-no return.  The next second my self-preservation gene bellowed “don’t pass out, don’t pass out,” as I rotated slowly on my side awaiting impact.  WHAM, bounce…. Slide, slide, stop.  Yeah, I didn’t pass out and wear off my face like others I had seen in Harrachov.  With my bottoms torn off my skis, I went to the team bus for a good cry to gain my composure.  Hard to believe that a Norwegian photographer caught it all in a sequence of 9 photographs, one winning the Norweigen sports photo of the year and making the cover of “Ski-Sport” magazine and earning him $10,000.

Just as memorable that day was the success of my team mates.  Mike Holland was 6th overall, putting in the long ride on the Day 3 with 147m.  Jon Denney also flew well with a 15th and 16th place and Landis Arnold came in a respectable 17th and 24th.   After the award ceremony, we decompressed by throwing ourselves down the landing hill in the dark like human air-hockey pucks, and we each stole our long ride markers from the landing; mine was 132m as seen above with my little sister Libby and bottle of Slivovitz, a souvenir from the World Cup final in Planica.  Welcome to the world of ski-flying….what a rush!

Editor’s note-  I can’t resist adding that there was no one more athletic and acrobatic on their skis (and off) than Dennis.  A fact he confirmed when he graduated from Dartmouth and, after getting his diploma, pulled a back flip off the stage in front of 1,000 classmates and their families. And again when he rode the first Burton Board ever sold (wood, no bindings, just leash to hold on to) down the landing hill of the large hill at Thunder Bay.  And again when… the list goes on. 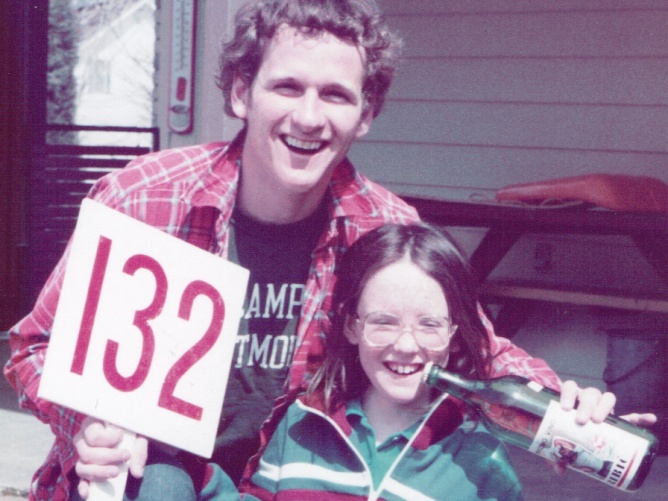