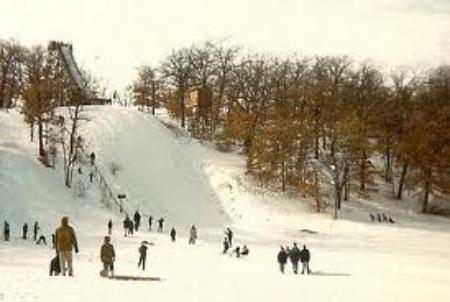 I stood at the top of the old, wooden Theodore Wirth ski jump.  I do not remember how many meters it was because I was a downhill racer on the alpine side of the team and did not know about such things.  Our assistant coach, Johan Hinderlie, thought that going off the jump would make us better racers.  Johan was such a great skier and charismatic guy that if he said jump, I would not ask how high it was.

Now I was not so sure of Coach Hinderlie as I looked down from the top of the jump!  The wind was blowing and the people looked tiny at the bottom of the hill.  Earlier, Johan started us out by just skiing down the landing hill.  I had never gone that in all my days of bombing runs at Buck Hill, Trollhaugen or Telemark!

After a few more times down the landing hill, it was time to go to the top.  Walking up those narrow steps on that steep an incline was scary.  We were carrying these enormous army surplus skis that weighed a ton and seemed ten feet long.  They had been stored in West High’s supply room and had not seen the light of day in a long time.

Well, there I stood, looking at fellow racer and on-jumper, Paul Madsen.  It was his first time, too.  He bravely decided to go first.  Johan stood at the top of the landing hill and yelled up to Paul, “Remember, don’t try and jump or stand up, just stay in your tuck position all the way down to the bottom.”  Paul slid his skis back and forth for a long time before he got up the nerve to go.  He shoved off and started down.  He looked good until he left the jump.  Suddenly one ski was pointing straight up to the sky at a right angle to the other.  His arms were quickly doing the backstroke as he sailed over the landing hill and out of site.

I looked at Johan who kept wincing every time Paul, apparently, took a bad bounce.  Finally he stopped and called, “Paul…Paul…are you alright?”  I could not see Paul and never heard an answer.  After a long while, Johan turned and looked up at me, “Ok, David, it’s all clear.”

The thought of walking back down the stairs went through my mind but I knew there was only one way to go and that was on the skis, with tremendous fear down.  I fought off the delusions of grandeur of soaring off like some Olympian and stayed in the tuck position.  I landed a short distance away and shot down the landing hill.  Just when I thought I would make it the hill suddenly leveled off and out went my skis.  I tumbled a long ways, but I was still in one piece!

I walked back and saw that Paul was all right, but his day was over.  Johan’s encouragement helped me go down a couple more times.  I never could keep my feet together at the bottom though.

Johan must have known what he was talking about because I skied my best after that and made it to the State Meet.

I have not been down a ski jump since, but I am proud to say I have done it once and I am thankful I do not have to do it again!  Hats off to you brave jumpers!