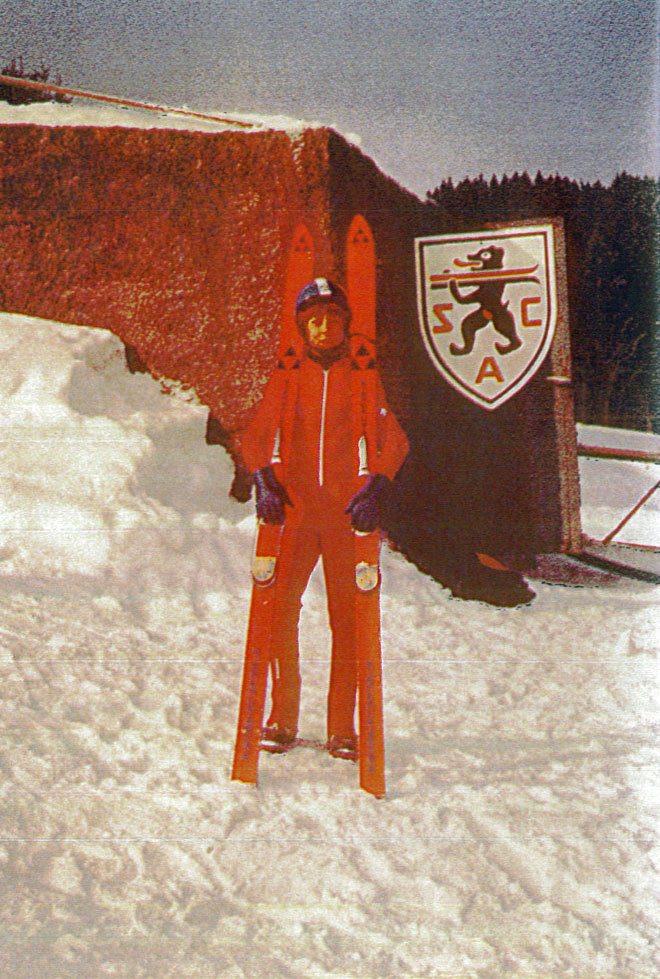 Patrick Kruegel in his home country of Switzerland with his first pair of Fishers!PATRICK KRUEGELAge: 46Minneapolis, MNMinneapolis Ski Club & St. Paul Ski Clubkruegelp@yahoo.com Growing up in Bern, Switzerland, I have many memories of mostly fun moments. For the purpose of this amusing Story Project I will keep it to 3 short stories/experiences. My home hill was in Kandersteg where they still have 3 hills (HS25m, HS60m & HS90m). Kandersteg was brand new at that time and the opportunity to have plastic was used by many National teams, including athletes of the US National Team, from the late 70’s throughout the 80’s. It was sometime in the summer of 1980, I was busy practicing on our HS25m when I saw a bus pulling in the parking lot. Out of this bus emerged the complete Finnish A Squad, including my idol Matti Nykänen. This was well before he became famous, other than winning many World Cups and Olympic medals, for not so flattering issues. It was just a great feeling to practice right next to some of the World’s Best athletes training on the HS90m and using the same chair lift. We also had lunch at the same restaurant and enjoyed watching them in the gym area at the jumps doing weights and dry land jumps. This happened on several occasions. Absolutely priceless! Sometime in December in the early 80s, our club was heading for our annual Night Jumping Tournament to Vaulion (HS60m), which is the French Speaking part close to the border of France. I was really excited to jump at a Night tournament, since most jumping back then was done during the day. Having lights was considered a luxury. As I was sliding down for my 1st official competition jump, I was about half way down looking at the take-off; all of a sudden the lights went out. It was pitch dark. This hill is almost completely hidden in the woods so there was not much natural light. I tried to think to myself, just relax and go with your feelings. What I was really thinking is “Holy crap, hang on for dear life, that might turn out ugly!” It felt like you’re riding your bicycle in a tunnel without lights. Luckily, I somehow managed to land straight and skied down the landing hill, screaming all the way down. Needless to say, I prefer jumping in bright daylight! Many smaller ski jumps in Switzerland are built within the natural contour of a hill or mountain. Wooden or metal towers/in runs are not common. Many are even built within the boundaries of a ski area and without any traditional counter slope or long out run to slow down your speed. Well, one of these untypical contraptions was a jump near La Chaux-de-Fonds. This town is near the French border as well and is considered the Epicenter of the Swiss Watch Manufacturing Industry. Anyway, this facility was unique in several ways that from the start gate you would not see the take-off, nor would you see the jumpers coming to a stop at the end of the out run. Let’s just say, there was no formal end to the out run. After the jump, you had to ski all the way down to the bottom of the mountain; your speed would increase in the process. And we are not talking of a small hill here; no this was a real mountain, skiing down through the woods. After your jump you shouldered your skis and had to hike back up, which often would take you more than 30 minutes. I was more terrified of what would happen after the take-off, since the jump definitely was not over until you have mastered a complete stand still on the bottom. The other strange situation was that skiers would have to strap on their skis and wait in line sideways along the in run, move up one by one until it was your turn to jump from your side position inside the track. Certainly, there was no bar start. This would look really funny because all the skiers would line up almost all the way down to the take-off, with mostly close to 70 skiers. Needless to say, training jumps were limited, because #1 you ran out to time and #2 you have gotten so tired from all the walking, that you just did not have much energy left to keep jumping. Other jumps located in the middle of a ski area allowed us to take the T-Bar back up. But as you know, the only problem with that was skiing down a ski area with jumping skis is not the easiest thing to do. I want to take the opportunity to thank my dad for always supporting me and my mom for not being too scared, even after a few hard crashes. The photo shows me proudly in my first real jumping suit. “Heia or Have One!”