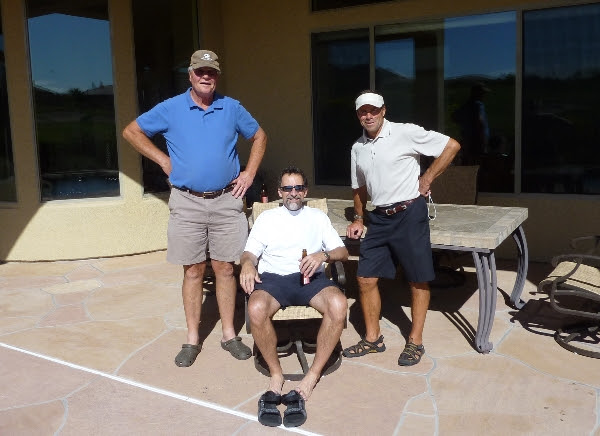 The binds that tie… and stick.  Frenchie’s ski jumping buddies, now golf friends Nipper Jacobson, Greg Windsperger, and Jerry MartinELDRIDGE “FRENCHIE” FRENCHAge 66Chanhassen, MNMinneapolis Ski Club During the mid to late sixties the Central Division of the USSA had Winter Training camps before and after Christmas at Mt. Valhalla near Bayfield, Wisconsin. This was just off Lake Superior so the lake effect snow dropped six plus inches of snow every night and the temperatures hovered well below zero. Needless to say we tracked and tracked that hill about four times a day, sometimes more. I remember one year when the snow was unusually heavy and the coaches loved to have us to run in the snow after jumping. On one particular day we were to run up the side of the landing hill and circle through the woods for about a mile and back down to the outrun. Dummer Jacobson thought he and I could take a short cut through the woods without getting caught by the coaches. As soon as we dropped off the trail I knew I was in big trouble. Dummer lead the way, at six feet six plus, and started to sink to his waist. I followed and was pretty much buried in the snow. It took us about an hour to take our short cut and catch up with the others who were sitting in the out run and laughing their asses off. Those winter training camps were all about ski jumping but also about great developing life time relationships. The Jacobson twins and I keep in touch almost daily by email after 52 years of friendship and countless bullshit stories when we get together in person. Every year Nipper shoots more deer, catches larger fish and sinks more long putts than any human alive. Without ski jumping our paths would never have crossed. The stories from the training camps could go on forever and fond memories will never die.