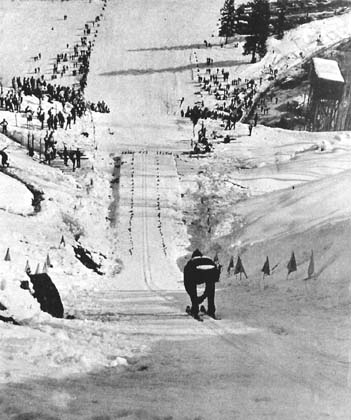 The hill in Durango, CO dressed for the 1971 National Championships

People sometimes ask what was my best day of jumping, or my worst day.  My best was on the big hill in Berlin, NH on a beautiful day when I flew past the blue line on every jump and registered my longest ever competitive distance.

My worst day, really it was my most difficult day, was in Durango Colorado at the 1971 National Championships.  It was my second year in Veterans Class (now called Masters).  Before I moved up from Class B, Phil Dunham had dominated Eastern Vets Class for a decade or more.  Phil was a good jumper and I had no idea if I could match his results, but I was about 14 years younger and discovered that yes I could outscore the defending champ.  I enjoyed great success that first year, opening with seven straight wins at Bear Mt, before being bumped to second by my dear friend Earle Murphy, then winning the Eastern Vets title and a few other meets.  This success left me wanting to see how I would stack up against the Vets from other divisions so I planned to ski in the National championships in my second year.

The Championships were in Durango, Colorado and I was teaching Math at Plattsburgh State at the time so it had to be a very quick trip. I flew out of Montreal on Friday night, stayed overnight in Denver, and flew to Durango on Saturday morning.  I think that the pilot on this flight must have worn a Stetson hat and cowboy boots — he didn’t descend, he dived!

I caught a van ride to the hill far out on the other side of Durango, arriving just in time for one practice ride.  The 7000 feet of elevation made climbing the hill quite a challenge.

Durango is in the extreme southern part of Colorado and the area was experiencing a warm spell — very warm — maybe even hot.  The temperatures ranged through the 50s and might even have hit 60 as the sun glared directly down on the inrun and landing.  Several falls left big craters in the landing that couldn’t be repaired — at least they weren’t repaired.

If you landed safely and negotiated the crater field, you skied on the soft, sticky snow through a nice big dip to the outrun.  However, a crest in the outrun just past the dip discouraged early stopping.  It was more natural to ski over the crest first before snowplowing or getting the skis going sideways.  But when you had passed the crest, the remaining outrun was very short with a barbed wire fence at the end, and of course the sloppy snow made it like skiing in wet cement.  Low boots offered very little control, nor did they protect the ankles of the unlucky skier who might catch an edge.  Needless to say there were plenty of walking wounded along the side of the landing together with those who wisely decided not to join the fun.  And by the way, don’t take off your skis on the outrun or you’d punch through the surface and find yourself standing knee deep in a hole in the snow.

I survived Saturday’s competition and soon set to finding a place to sleep.  I asked the skiers from the college in town — the Durango Hill was home hill for the Fort Lewis College ski team — and I found an unoccupied couch in the dorm room shared by Matt Bimonte and Peter Graves.  I didn’t sleep much Saturday night as I lay there imagining my takeoff over and over and over.  Sunday brought another hot sunny day and Snoball Severud ruled that the hill should remain closed until the afternoon competition.  As start time approached, the Veterans climbed slowly up along the all natural inrun.  We stood around, stretching and waiting to ski, in a flat starting area dug into the side hill with a bulldozer.  The sun beat down on the raw, 20 foot vertical dirt wall behind the start area until, perhaps five minutes before the first skier got into the tracks, it dislodged a 20-30 pound rock which fell more than 15 feet and smacked into the snow exactly where the skier would stand.  Someone could have been killed.

And who was that first skier?  You guessed it — for the second day in a row I wore number one in a competition with no forejumpers.  Yesterday’s track remained but the sun had softened the surface considerably.  But you gotta do what you gotta do so I clipped into my red Hirt Record skis, stepped into the track, put on my goggles, snugged down my stocking cap and when the flag went down, I slid over the brink.  A photographer from the local newspaper had climbed up with us and immortalized my start in a photo that decorated the front page of the paper the next day.  You could see in the picture that my skis were compressing the soft snow at least a half inch as I skied down the track.

I survived the day, finishing fourth (good for the lead medal) behind three Central jumpers: Don Hurst, Jack Pauly, and Lenny Johnson, and ahead of only the two skiers who had scratched after the first round.  At the medal ceremony they called me up for the bronze but I told them that this was surely a mistake. It was — just another awkward moment to add to a difficult weekend.  In Senior Class, Jerry Martin won the first of his three National Championships, well ahead of Jay Rand and Bill Bakke.  Bill Polanka took the Junior crown.

By freeloading rooms, I kept expenses to a minimum, about $350, almost all for the plane ticket.  I’ve been a tightwad all my life and $50 per jump really shocked me.  But I had found out how I stacked up against the best Vets in the country (not too well) and was glad to get back home with all my body parts intact.

ps– I chased a National medal for years but never got one until 1999 in Lake Placid when Masters had essentially disappeared from the Nationals and I was the only Old Boy in the start list.