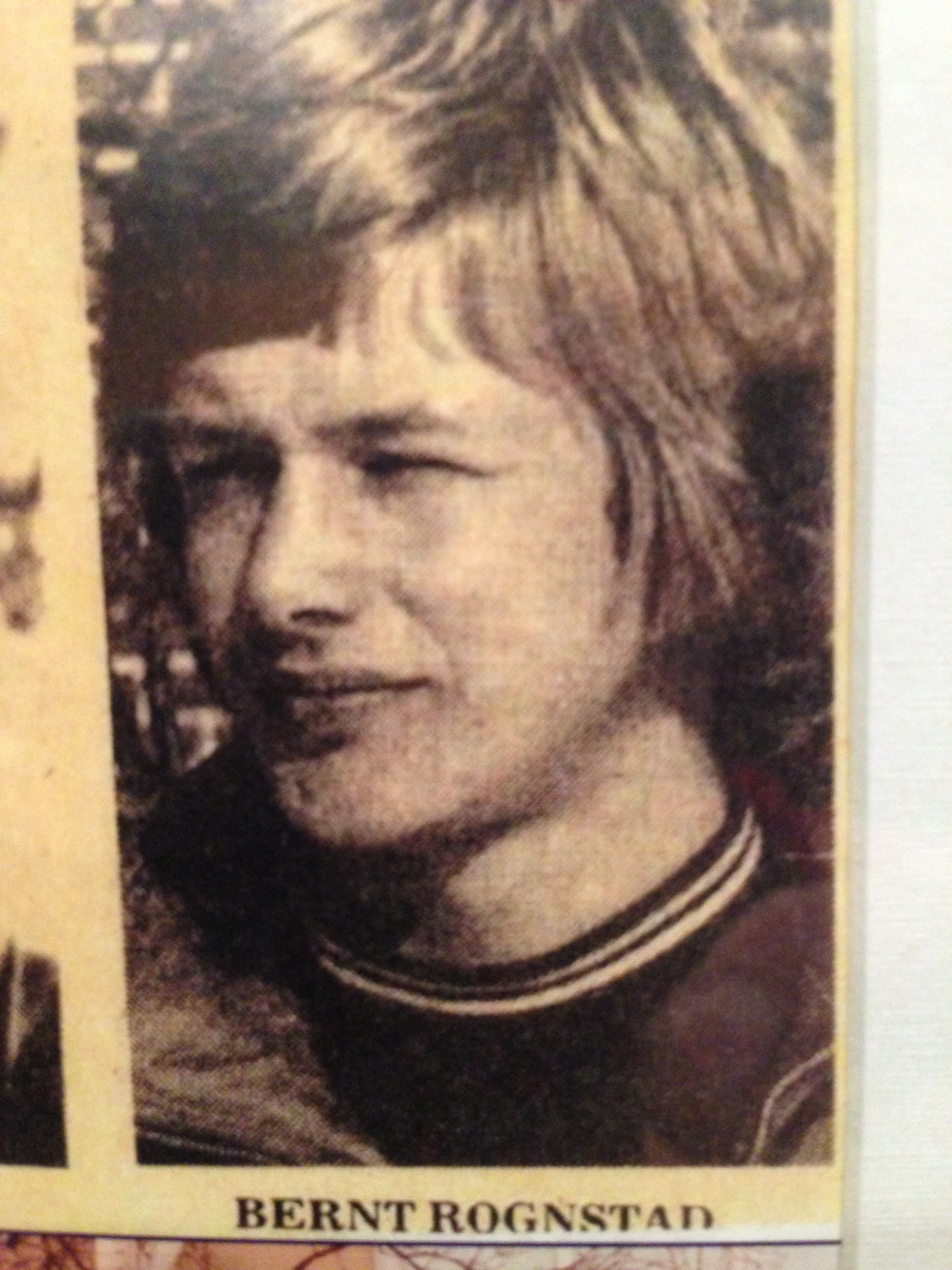 This is a story about a ski jumper who I didn’t get the chance to know but was a very good friend to John Benzie.

Dr Don Hurst was traveling in Fenstad, Norway in 1972 and was looking for any local skiers who might want to travel abroad and get a college education.  The timing was perfect as there was a combined skier that was interested and was also an accomplished soccer player at the national level in Norway.  That following year, in 1973, Bernt Rognstad was on his way to Northern Michigan University.  Bernt’s accomplishments in skiing for NMU were impressive. He was 3rd place in 1973 NCAA Championships, runner up in the 1974 NCAA Championships and 5th in the 1975 NCAA Championships.  He also participated in many USA ski jumping events from Ishpeming to Giant Pine Mt to Westby.   Not many people knew the other side of this gifted athlete as his soccer skills  proved to be the real life story.  As you know, ski jumpers do a lot of cross training with soccer.   Part of our training at NMU was playing soccer on the small corners of the NMU Wildcat football field which was a daily occurrence when the weather cooperated.  At the end of one practice session Bernt kicked the soccer ball through the uprights just past the football coaching staff and into parking lot from about 20 yards away.  The head football coach walked back to Bernt and asked him his name to which he replied ELVIS in his Norwegian accent.  He was always making jokes like that.  The coach then asked him to kick a football through the uprights from the 20 yard line and Bernt replied ”which foot do you want me to use.”  He also did this from 30 yards, and had little problem using his right foot kicking the ball thru at 50 yards.  It seemed NMU had a new kicker and our ski jumping team had a dual sport athlete.  Bernt’s humor was always there as when he made his first appearance on the football field with double zero ”00” on his jersey and we all had a laugh.  This laughing stopped as his first kick off sailed out of the end zone.  American football was now giving Bernt a new beginning in the US but he never left the ski team as this is what had brought him to America.

Fast forwarding to 1975, Bernt was offered a contract with the Atlanta Falcons as a kicker but commissioner Pete Rozelle researched it and cancelled it due to Bernt having one more year of eligibility left in college.  This did not deter Bernt as he came back to NMU to complete his eligibility and give us one more season.  On a  sad day fall Saturday night in 1976, when the NMU Wildcats returned home from the Pioneer Bowl game in Akron Ohio, Bernt Rognstad was struck by a car while walking home from a celebration party to his campus room and died of head injuries.  A tragic end to a very promising life ahead.

When doors close for some, others get opened, but that is a another story…