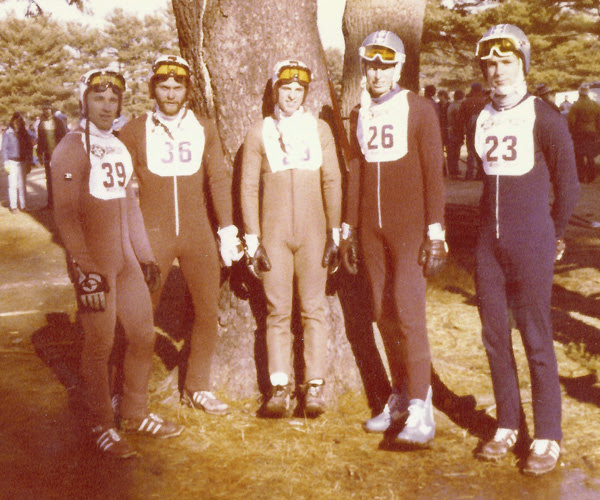 BOBBY SACHS
Age 52
Ford Sayre Ski Club
Holderness School
St. Lawrence University
Hanover NH (Bobby then)
Alexandria, VA (Bob now)
But I am still Bobby when I go back to Hanover…. it is awesome.
skifaster@cox.net
Lake Placid K90 about 1981, New Year’s Day. Getting ready for my first jump, went through the usual routine warm ups and stretches. Got the boots laced just right, checked the cables on the bindings, and clamped them down. Made sure the toes were under the little clips in the toe piece. Off I went. After takeoff, my left ski immediately whacked me in the chest and pretty much bounced off. I did two big flaps and came down on the knob on my right ski, and luckily just sat down, laid out flat and went down the hill head first.  I know this detail because there was video— not common at that time at all. I think my Coach Larry Stone may have taken it, but not sure. We watched it about 20 times. The best moment was the frame we would pause at that showed me with both hands out straight mid flap, body inclined about 30 degrees above horizontal, left ski off and behind me, left leg bent at 90 degrees and nearly above my head. right ski still in front of me where it should have been. Boy I wish we still had that video! Luckily I had no injury, and went back up to jump the second round, grumbling to myself something about getting back on a horse. Apparently the cable check did not include making sure it was around the heel of my boot….
After the Olympics in Placid there was a group us who loved being outdoors in the winter and enjoyed doing things fast. There were also many, many left over little orange avalanche shovels everywhere from the Olympics. For 3 or 4 years we each took a shovel and headed to Mt. Van Hovenburg to the bobsled and luge tracks. Our butts fit in those shovels like gloves, and when you sat in one you could slide well. The first year we walked up from the bottom and took a few runs taking  about 2 or 3 of the final turns, The next year we made it up a bit further. Finally emboldened by our previous experience in 1982 or so  we made it to the top of the men’s luge start.  I will never forget sitting on the shovel at 2 in the morning with our mental capacities either diminished or enhanced, depending on your perspective, and sliding back and  forth gripping those stainless handles and ripping out of the start full bore. The track started with a straightaway, then a very slight right turn, and a slight left. By the time we hit that slight left we were screaming- maybe 20 mph or so. That is fast when you are on a shovel. The next turn was a double: a wicked right and a serious left. The sides were about 8-9? feet tall and I was up about 6 feet high in the turn and was flattened out by the G-Force. Steering, by the way, was not really possible and minimally accomplished by dragging out hands on the ice. So I came down off that right turn straight into the wall and tumbled and slid. Then I heard that echo-y sound of someone else coming down, I think Jeff Volmrich  who many of you know if 6′ 3″ and 200 lbs, to my 160. The collision was explosive, memorable, and may have produced some soreness for jumping the next day. Oh, and my gloves melted from ‘steering.’

Bob’s notes-
I am one of the lucky people who was fortunate to be born and raised in Hanover, NH and nourished by the Ford Sayre ski club. At Ford Sayre in 1960’s many of us began our official training in 2nd grade, and the lessons were available through 8th grade. . All forms of skiing were so important to me that I signed up for alpine, jumping and cross country. The weekly schedule was something like this: mon-wed-fri after school alpine skiing at Oak hill on the J-Bar lift. Tuesday and Thursday afternoons cross country skiing at the golf course. And jumping at oak hill under the light a couple of nights a week, and later on the ‘big’ Dartmouth jump (K50+?). Jumping for so many of us Hastings, Cutters, Guests, Hollands, Mclaughry’s, Sachses, Farnhams, Malmquists, Hutchinses, and so many more families with multiple kids all started at Samples Hill in Norwich, Vermont.  We jumped Samples hill for years before the ‘new’ jumps were built at oak hill (thank you Paul Hastings). Wednesdays at Ford Sayre were the best because we were allowed to leave school at 2:15 or something to go skiing.  That made me feel so special and important, I will never forget it.  I think it may have enticed some other kids to take up ford sayre lessons.The highlight of the Ford Sayre year was always the winter carnival at the end of the year. There were slalom, GS, and cross country races, and a jumping meet. There were trophies for lots of the events, and ribbons for 1st through 5th place. I have loads and loads of second place red ribbons, and two cherished first place ones. I am pretty sure Brad Hastings has the exact opposite count! Notably different from today, not everyone won something. The grand prize for the best combined overall skier in all events was the Johnny Johnson Trophy [jeff was it that or John e. Johnson??] .  Regardless of our finishing places, we had a great banquet, and for many years watched the same ski old movie- “ski the outer limits,” which now appears to have become a classic. From Ford Sayre I moved on to Holderness school which also provided the opportunity to ski every day right after lunch, and then go back to classes before a late dinner. Holderness had its own jump like so many prep schools and loads of colleges did. I made the rounds for prep school meets, and competed in United States Eastern Amateur Ski Association [USEASA] events on weekends. This was when it became even more fun. Jumping provided an opportunity to go places, meet new people, and compete at something we loved and shared. The culture and experiences we lived then are still relevant in my life today. When I run into or catch up on facebook with friends from then, I still see and feel like the kids we were and take joy in seeing how those formative years haven’t faded in meaning.
I went to St. Lawrence University in Canton NY, and decided to take a year off to compete jumping. It was a good year and I am glad I did it. One of elements from ford sayre was the dry land training which we did in many ways, butmy faviorite was sand hill running and slalom. It built strength, and was incredibly fun.  When I returned to SLU, the NCAA had eliminated jumping for insurance liability, and so I never got to ride the SLU jump. But we still had the Dartmouth Winter Carnival which was awesome. Jumping in front of thousands of drunk college students was epic, and since I never really did that well, I took special joy in covering them in snow with an extra hard stop right in front of the fence. 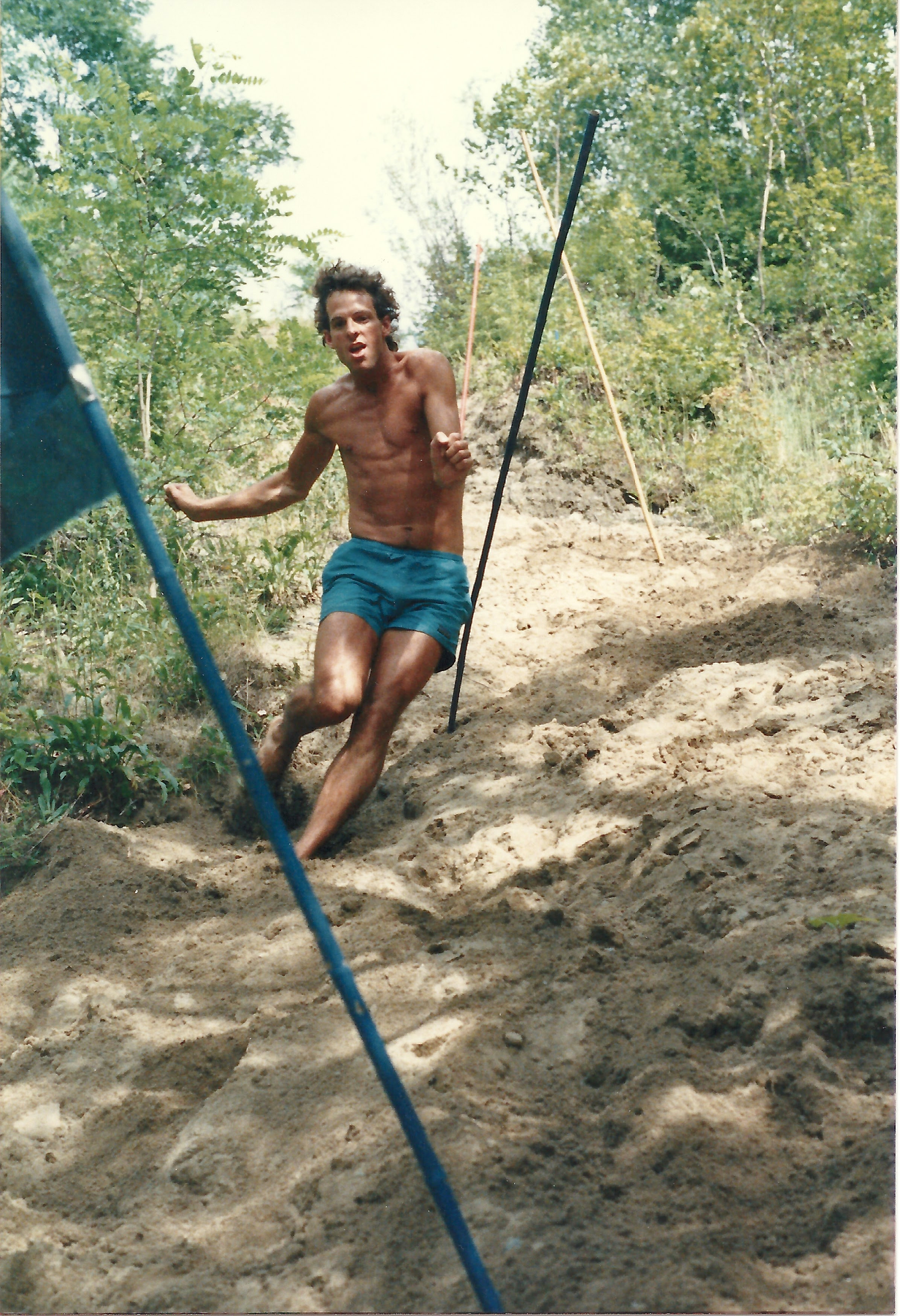 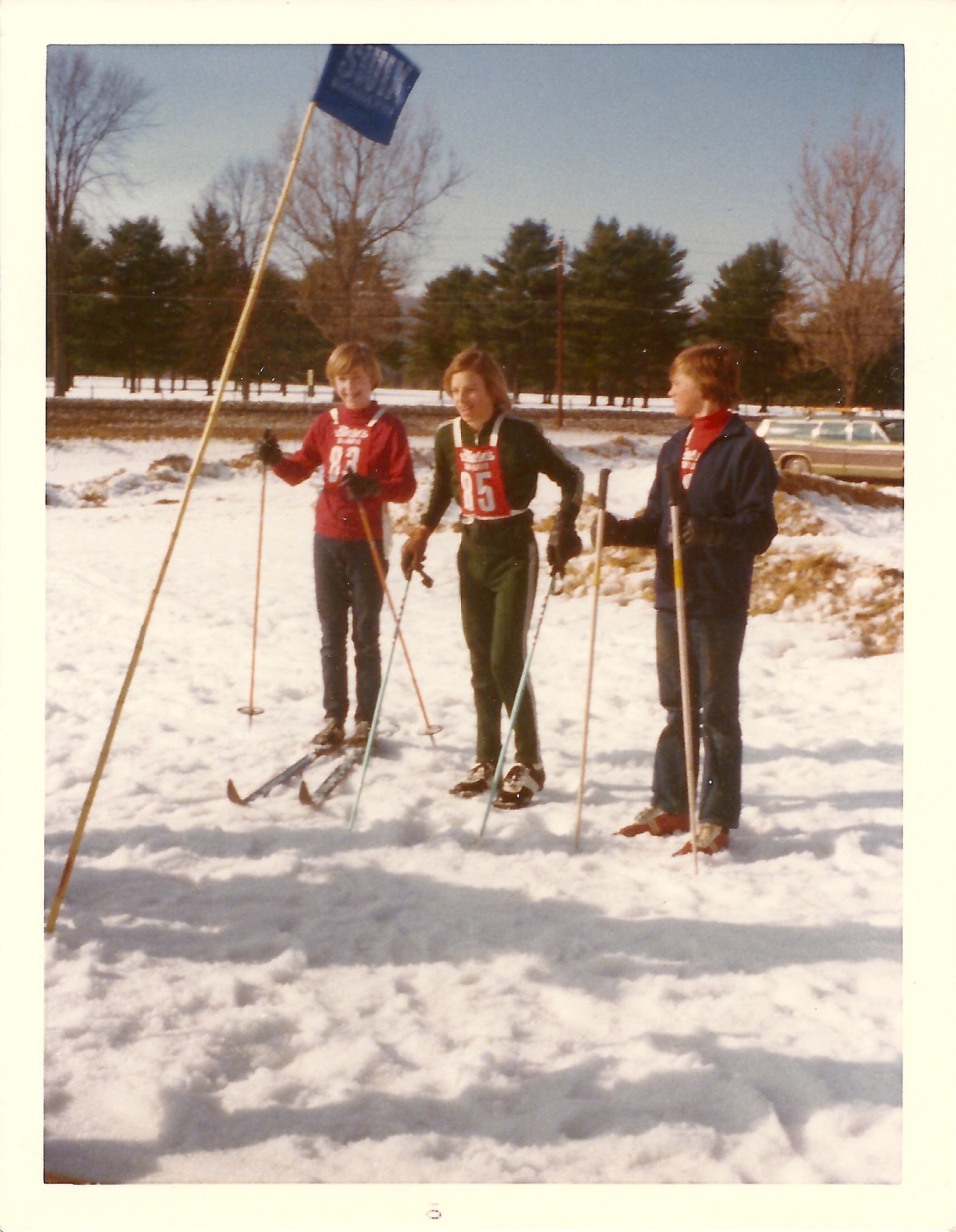 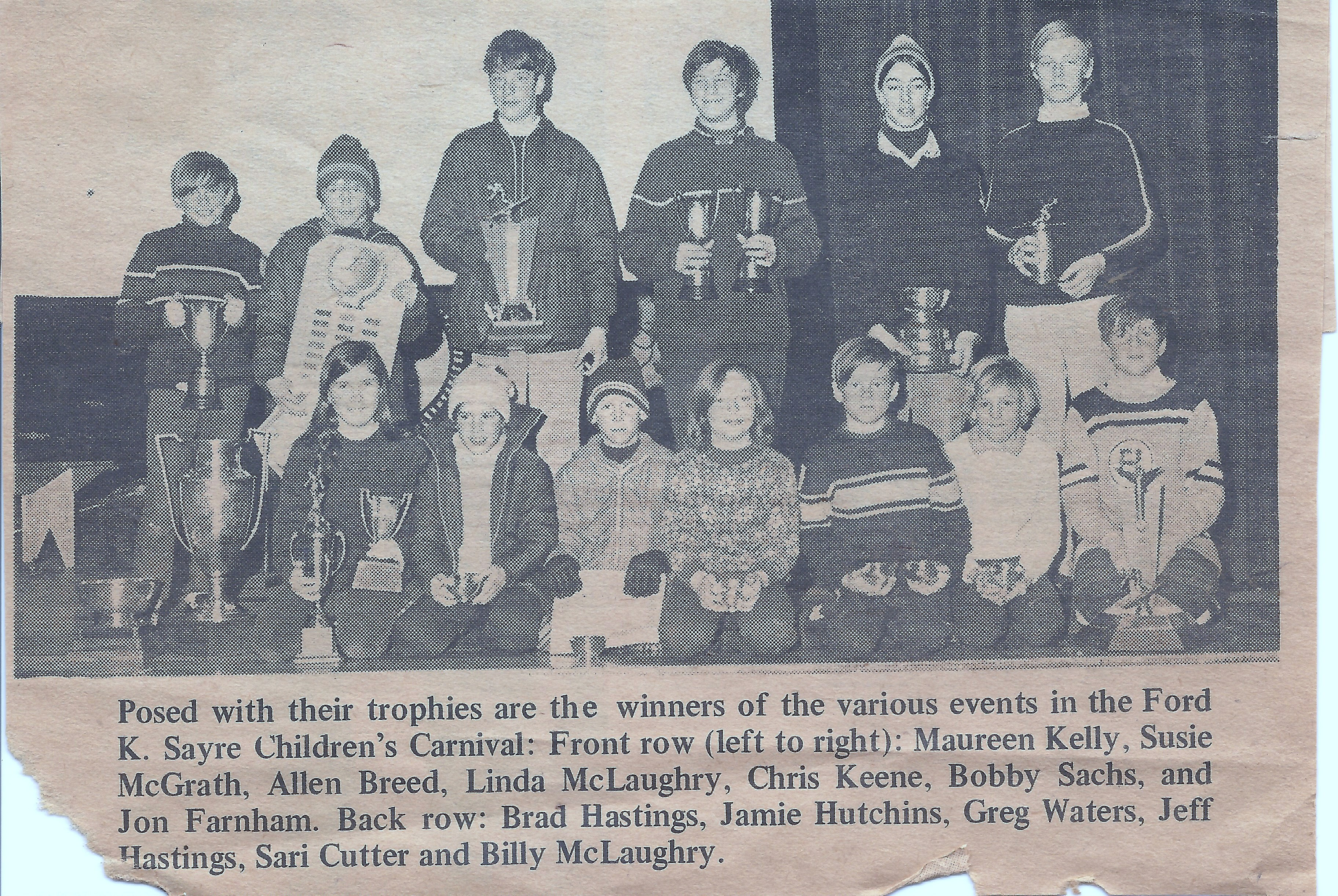