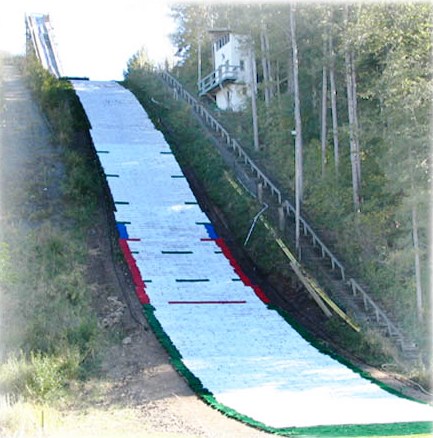 Blackhawk Ski Club- site of Dave Norby’s story.  This is the current 60m hill but the site of the former 40m and Stan DuRose’s D6 joy ride.DAVE NORBYAge 71Blackhawk Ski ClubMadison, WIAs I recall the year was 1964.  The Blackhawk Ski Club decided to remodel and rebuild our 40m jump next to the 60m.  It is the current site of our plastic mat hill.  The hillside the jumps are built on is a ridge of limestone and very difficult to contour.  Stan DuRose who was one of the founders of the club was a civil engineer and did the design along with just about everything else.  The work crew that supplied the muscle consisted primarily of Bill Bakke, Don West, the Jacobson twins and me.  In order to cut the top of the knoll down to position the takeoff in the proper spot Stan rented a big D6 Cat.  One Saturday morning we all worked hard moving and clearing  rocks down the landing hill.  A three foot high pile of rocks was across the landing about half way through the curve.  Time for lunch.  The crew piled into a car and headed for Middleton three miles away.  Stan always packed a lunch and stayed at the hill. When we got back Stan was nervously pacing back and forth with his face white as a ghost.  We asked what had happened and he proceeded to tell us.  He had gotten off the Cat to stand back and look at his work.  But he hadn’t put the emergency brake on.  The Cat started moving and with the tracks beginning to spin faster and faster it was impossible to hop on and stop it.  Down the landing it went creating a huge cloud of dust with the tracks spinning so fast they were almost forming a perfect circle.  The blade hit the pile of rocks slowing it down almost to a stop.  The blade dug into the ground stopping it altogether.  When the dust cleared there was the Cat, upright and idling with no damage.  Stan got on and drove it up the road back to the top.  He later said as it was flying down the hill he was wondering how he was going to come up with enough money to replace it!  I have often said we sure learned a lot of unmarketable skills out there!

Even the builders of the sport can get a rush of adrenaline, and we didn’t often appreciate their efforts whenwe are young.   They were as much a part of it as the jumpers.