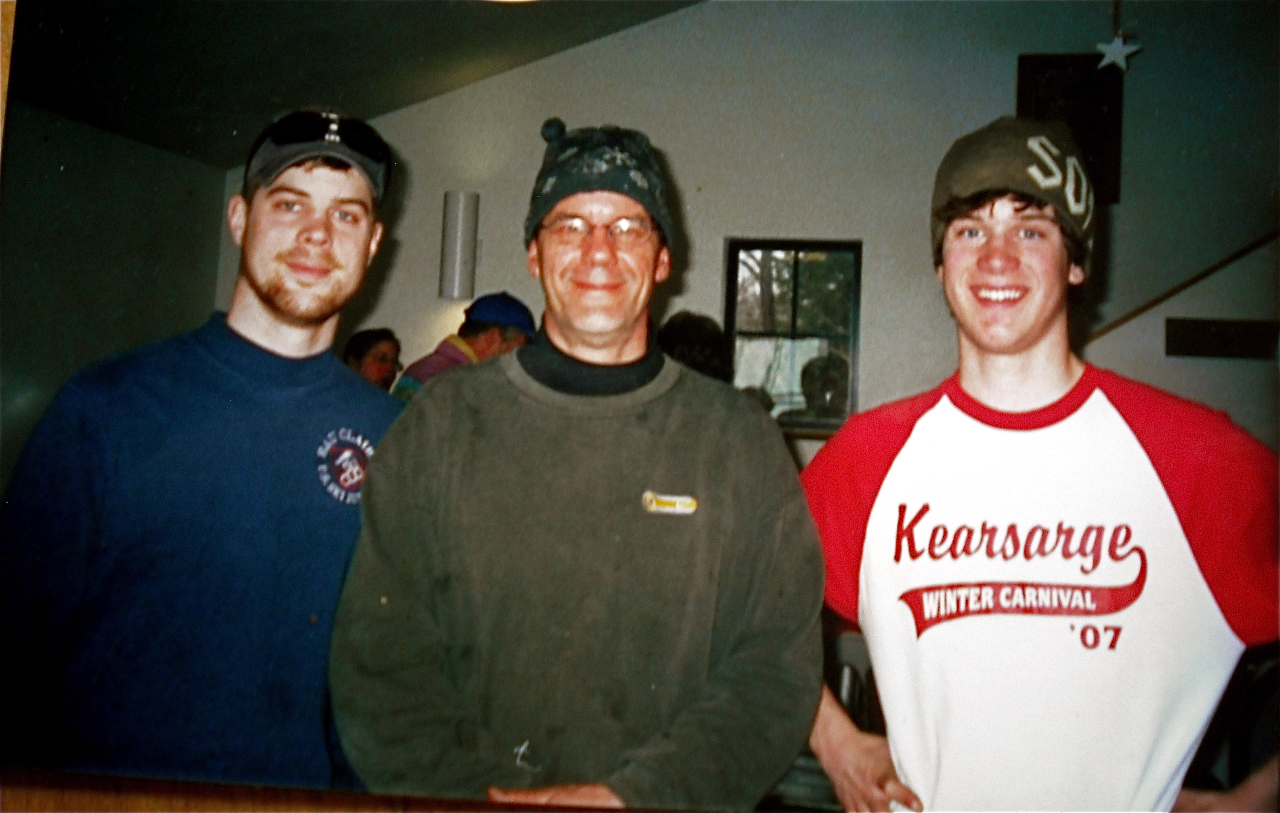 Chris Jones (l) and Danny Jones (r) at the Lebanon Outing Club Mud Meet with their great friend, Jon Farnham, who had a long standing rivalry with Don West..MARTIN JONESSutton Mills, N.H.Andover Outing Cub A lot has changed in eastern ski jumping over the last 20 years on many levels, but one of the things that remains are some of the personalities involved with the sport.  Two that I think of immediately are Don West, and Jon “Cannonball” Farnham.  They embodied the phrase “friendly rivals”.  Competing weekly throughout numerous winters, they were extremely competitive, great friends, and a constant testimony to their love of the sport.  A weekend in Salisbury particularly stands out when I think about their rivalry. It was a beautiful winter weekend that year.  A number of us (Jim Carter, the Squires’ and others) had set out lawn chairs in the sun to the left of the outrun. The Cannonball was skiing ok, but just not hitting it the way he wanted.  Don in the meantime had looked real comfortable and solid on his jumps and Jon knew it.   He needed to find an edge to challenge Don and he came up with a seemingly great plan. During the lunch break Jon and Jim Carter left for a bit together and returned as the competitors were gathering for the competition.    All the competitors were introduced, Jon played his classic harmonica rendition of the Star Spangled Banner, and everybody headed up the hill for the trial round.  True to form Don looked smooth, and laid one down at about 38 meters.  Jon, a little late, was about 36.  They skied over to the area where we were gathered, made a couple of comments, and took their skis off to watch for a while.  When the last of the trial jumps were drawing near, Don shouldered his skis and headed for the stairs.  A couple of minutes later Jon did the same, but headed off in a direction away from the jumps. A few moments later Jimmy Carter said, “I’ll be right back” and took off in the same direction. I thought nothing of it, and Jim returned about 10 minutes later.  Once again, Don was solid and landed his jump about 39 Meters.   Jon still not on his game was a good bit short of Don with his 35 meter jump.  Same routine as they both skied over, chatted for a bit, and watched the younger jumpers take their turns.  At about the same point in the first competitive jump round, the same scenarios occurred. Don gathered his skis and headed up the stairs.  Jon did the same shortly after, and again headed in the other direction with Jim following a couple of minutes later.  When Jim returned again I was too curious to not inquire what he’d been doing.  Jim said to me, ” Well Don’s really jumping well this weekend and beating Jon every time.  Jon thought he needed to find something to help him stay close to Don, and we thought we had the answer.  There is an old service road over there that goes up the hill to behind the tower stairs area.  I’ve been driving him up to the top for his competition jumps.  So far it hasn’t really worked out.” Don then had another great ride of 39 meters in the second round. and a well rested Cannonball followed.  With a much better timed takeoff, and an exhalation grunt worthy of a world class discus thrower, Jon sailed down the hill.  37 Meters.  So much for that plan.  Jon congratulated Don on his arrival at the outrun end, and immediately came clean on his scheme. Don had a good laugh at that plan, and I remember his comment to Jon.  ”  I’ll have to remember that one Jon, I might use that myself, to keep jumping here a little longer than I thought I might.”