Editor’s Note- Coincidentally, today (December 9th) is Mike Holland’s birthday (former ski flying world distance record holder) … so it seemed appropriate to run a story from Tim Tetrault that has a special call-out to Mike… and Tara Prince.  Read on- 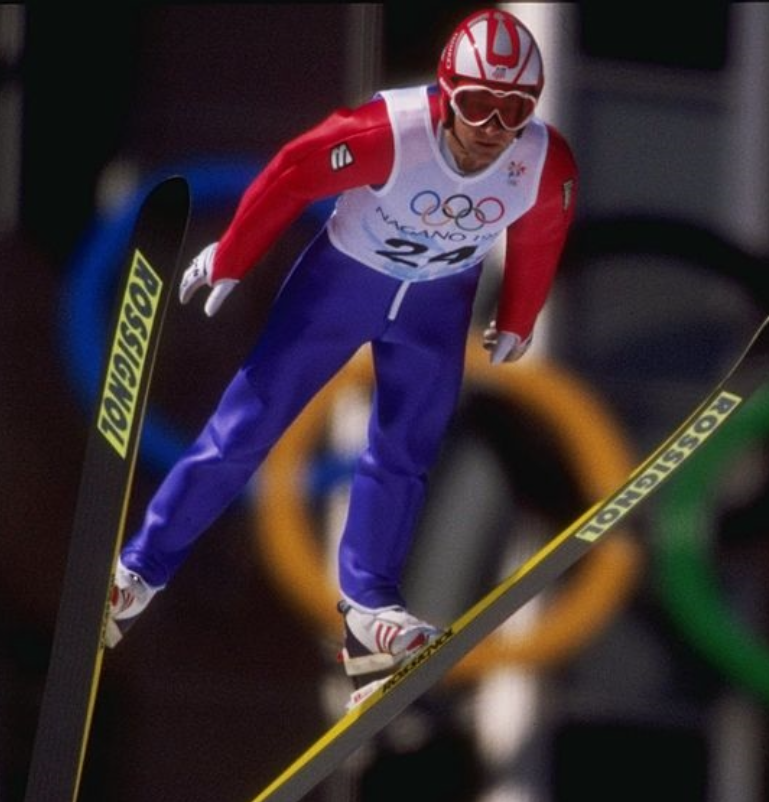 Tim competing in the 1998 Olympics in Nagano Japan.
TIM TETRAULT
Ford Sayre Ski Club
Arlington, VA
ttetreault@hotmail.com
I had a pretty successful career as a Nordic combined skier, measured not by medals or titles but by the number of years I was able to put off getting a real job.  I was fortunate to be able to be a full-time skier, and part-time waiter, landscaper, student and handyman from 1992-1999.  Growing up in Norwich, VT I had several sources of encouragement and inspiration that got me and kept me involved in ski jumping, most notably the Hastings and Holland brothers, but looking back there were two key interventions that come to mind that may have been pivotal and worthy of a shout-out in this forum.
The first came from Tara Prince back in 1978.  I was in third grade and it was my first year ski jumping.  Starting on the 20 meter, the first few outings I followed the standard practice of riding the landing hill to get used to the gear, the speed and intricacies of the hill and outrun.  I was extra diligent in my study of the landing hill and was slow to graduate to the jump.  Tara regularly encouraged me to give it a go and frequently offered to walk with me and show me the ropes.  By midway through the season, I had become expert at the landing hill but was still struggling to muster the courage to start from the top.  The coaches rigged up some sort of on-ramp halfway up the inrun (this jump was “built” into the side of a hill) to allow me to take the jump at my own pace. On the last night of jumping for the season, I had still not started from the top and Tara, determined to help be overcome my fears, offered to pay me $1 if I did.  A financial incentive was all I needed, we shook on the deal and I accepted her offer of assistance. I still remember the feeling of excitement and achievement when I stopped at the end of the outrun.  I spent the rest of the night tallying as many full-speed jumps as I could.  The following winter was a poor snow season and without snow-making the jumps didn’t open.  I went on that season to try my hand at alpine racing and didn’t return to ski jumping until my freshman year in high school.  If it weren’t for Tara’s persistent encouragement, I may not have experienced the full thrill of ski jumping which eventually brought me back after the long hiatus.  I’m not sure I ever got the $1 but, Tara, if you’re reading this your debt is forgiven.  Thanks, Tara.
The second came from Mike Holland in 1988.  After four years on the Hanover High School Ski Jumping Team and competing in some regional and national junior competitions, I was off to the University of Vermont, and ski jumping was no longer a collegiate sport.  I was at a decision point…do I bring my ski jumping gear with me or get rid of it all together and focus on my studies in engineering.  At the exact time of my deliberation, Mike was in the middle of his World Cup season traveling from one venue to the next, but he took a moment to send me a postcard.  It was as if he had read my mind. I can’t recall exactly what he wrote but I do recall that his message convinced me to take my gear with me and compromise my education.  Without Mike’s sage advice, I may not have stuck with it and gone on to travel and compete on the world stage like he did.  Thanks, Mike. 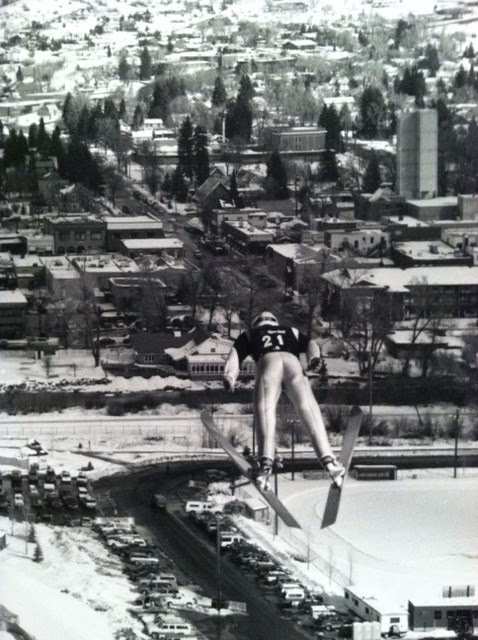 Tim flying in Steamboat around 1997(ish)