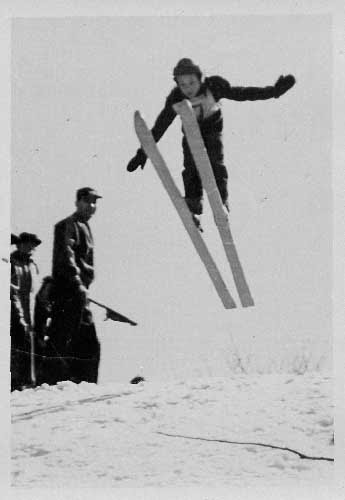 Hopefully we all had someone in our younger life that was the biggest influence on us.  As with many ski-jumpers of my day it was their father.
Being from Madison, Wisconsin I was in the southern district of the Central Ski Assn. Back in the 1950’s you had to qualify in order to go to the Central Championships.  There were hundreds of kids jumping back then so they needed to limit the field.
As I recall it was 1958 and I had won every tournament in our district.  The biggest tournament of the year was in Eau Claire.  The weather was great and the jump was in perfect condition.  Everyone was excited and everyone was ready.  Back then the three style judges stood in the judge’s stand with a box of numbers in front of them.  When a jumper came off each judge would pull up their style points which were displayed and recorded by a person on the other side of the landing.  Dad stood on the side where he could see the style points.
In the first round of Class A I had the longest jump by a foot over Clyde Brodt of Minneapolis.  Mine was the longest jump of the round and Clyde was a close second.  In the second round I beat Clyde again by a foot.  Dad watched the judges as I came down and one of them completely missed my ride because he was turned around and talking to someone behind him.  That judge heard my distance and quickly pulled up a 15.5 for my style points.  The other two judges each gave me a 17.  The maximum you could give back then was 17.5.  My excitement at the banquet was high when they began to announce the places.  I had lost the Central Championships by three tenths of a point.
Dad never said a word.  He didn’t tell me that story until I was married and in my middle 20’s.  At the time I am sure he didn’t want to make a scene and make Clyde feel bad about it.  Clyde was a good kid and we both congratulated each other.  I just went home and worked harder to become a better jumper.
So to all the dads and others that are involved around the ski-jumping scene my hat is off to you and all you do for the kids growing up in the sport.  Thank you!