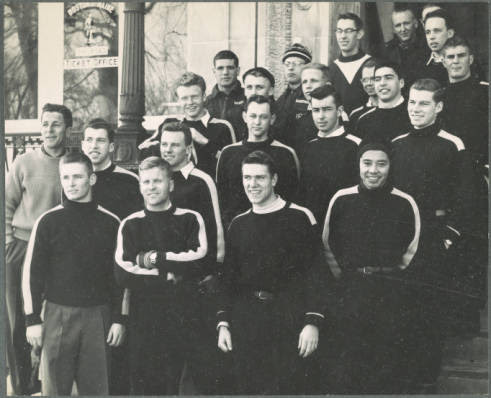 MAKING THE GRADE.  Dusty Johnstone, front left, and the 1956 Dartmouth Ski Team.
DUSTY JOHNSTONE
Dartmouth College Ski Team
Carlisle, MA
sdcjohnstone@gmail.com
My intro to Nordic sport came in 1951, when as a high school junior I fell in love with
XC skiing.  Coach made it clear that jumping and NC went together as a team
challenge, and soon I was struggling to be a 4-event skier. After a season of 4-event skiing
as a high school senior where the largest jumps were 20 meters, I went off to Dartmouth hell-bent to make the Dartmouth ski team.
Realizing my success depended in large part on jumping and NC, and aware that Dartmouth’s
40M jump terrified me, I made weekly climbs to the top of the jump. I often brought lunch, and
ate looking down on the tops of white pines, with the trestle swaying in the breeze, wondering
if I would be the first to die when snow fell.
Snow finally fell.
The climb up was robotic and left no memories. The trip down relived memories long forgotten.
It was the longest 4 seconds in my life, I’m sure because I thought it was over. I had vivid flash-
backs of the major crimes of my youth, things I had forced from memory years earlier. They included hitting my older brother (Age 8) with a 2×4 with a nail through the end, and I watched
him run to mother, trailing blood and plank. As I reached the take-off, I was telling mother I did
not push my playmate (Age 10) into the frog pond.  I did. I’m sure I thought I was talking to St
Peter and a full confession would get me through the gate.
In any case, life continued. I bounced off the knoll, survived the landing hill, and came to a stop
shaking so hard I just had to lean forward to climb the hill.
That was the start of a splendid career of jumping mediocrity. It was splendid in three ways:
1. Few experiences in life package so much challenge, thrill, fear, maturation, and joy.
2. Splendid are the bonds of friendship formed on jump hills.
3. Splendid it is to see your sons and grandsons far exceed your shaky start. 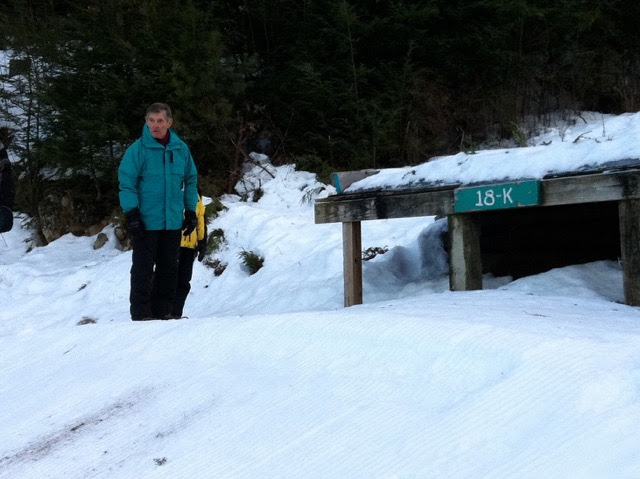 Dusty is front left… but look at the others in that picture… NCAA All-Americans Tom Corcoran (Olympic Alpine Skier), Chiharu Igaya (also Japan’s only Olympic Medalist in skiing), Peter Kirby, David Harwood, Egil Stigum, Richard Taylor (Olympic Biathlete and USST X-C Coach), Ralph Miller (World Speed skiing record holder)…
I’m sure I missed identifying some of the famous members of Dusty’s Dartmouth crowd… NCAA Championship Runners-up in 1956… but Dusty carried his own weight as a leader in both the ski and high tech industries… Dusty was one of, if not the originator and leader, of the Bill Koch League (conversion from Toger Tokle League to BKL following the 1976 Olympics)… Dusty started the Charlisle/Groton Hills Nordic Club which had quite a nice facility with K10 and K25 hills with a lift and a number of jumpers and Nordic Combined junior athletes (including current Ford Sayre X-C coach Scotty Elliasson who was a Nordic Combined skier back in the day in addition to Dusty’s sons who became USST Nordic Team members)… Dusty also established the Great Brook cross country venue in Masschusetts which his son Stuart currently manages… all of these feats while he was a Big Blue (IBM) Man.
Of course Dusty tells his story of approaching and passing the Pearly Gates… when in fact he had/has many, many more secular goals to accomplish.
Regards,
Walter