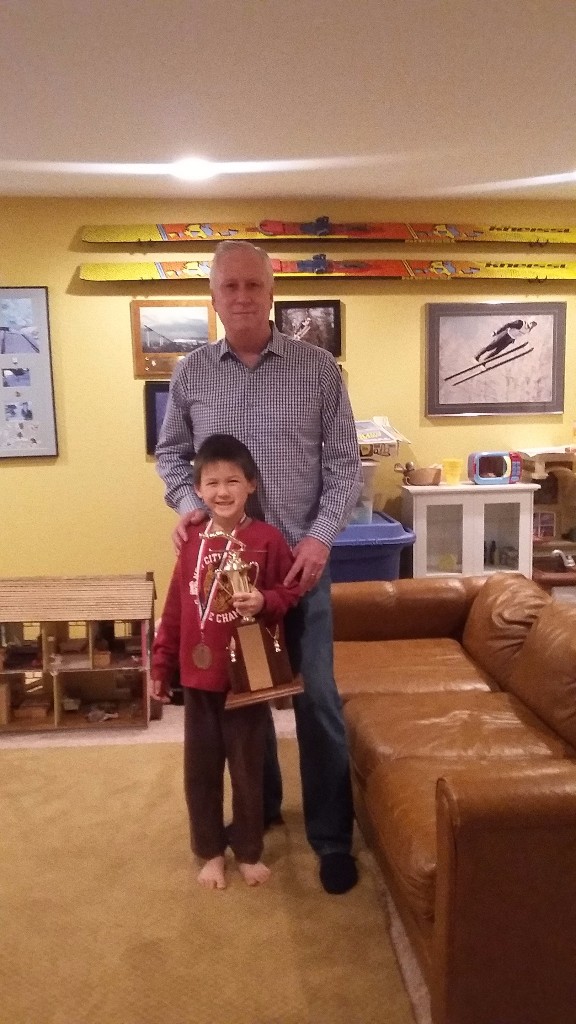 Todd and Toddli with aged and fresh hardware.

After reading the first story for 2017 by Scott Nichols I didn’t put much thought into it. It referred to the old ski jump (Big Nansen) in Berlin, New Hampshire that had its last competition on January 20th, 1985. It was recently restored and jumped by Sarah Hendrickson.  A couple of weeks ago something dawned on me as I was talking with my 6 year old son. He is also named Todd but we call him Toddli. That story will continue.

In January of 1985 we were staying at the Olympic Training Center in Lake Placid, which was the old hotel on Main Street (I believe). As usual, those on the US Ski Team who weren’t quite up to snuff on their jumping stayed stateside and those jumping well were in Europe or wherever.  At the same time Dennis McGrane had taken a sabbatical from jumping to finish school at Dartmouth. In his down time he would come to Lake Placid to jump so he was staying at the Olympic Training Center.  It was a quiet weekend with no competitions and Alan Johnson was the acting coach for us misfits. We were all expecting to simply have a weekend of training and do whatever we could to not get bored. Then Alan approached us and said that there was a competition in Berlin and they needed some Ski Team guys to make an appearance. When Alan mentioned Berlin I had no idea where this was or what it was like. I don’t think Dennis did either. Nansen Ski Club was going to take care of our accommodations and even feed us so we agreed to go.

So we make it to the jump and look at what we would describe as a banana looking trestle. The jump had the longest R1 curve we had ever seen. It was a decent sized with a K point of about 80 meters.  I took my first practice jump and with that long R1 curve it felt like an eternity waiting to get to the take-off.  It seemed like the jump was all table and hardly any vertical. Once you jumped the hill suddenly fell away and it felt like you were going to the bottom of the hill, but not necessarily.  The competition started and I put together two 78 meter jumps with perfect squat landings. Dennis and I are both from the Winter Park Ski Club in Colorado and Winter Park jumpers are known for their excellent telemark landings. Guys like Scott Clayton, Landis Arnold, Todd Wilson and Dennis demonstrated this well. Then there was me. A nice and solid squat landing.  Sweet!  Dennis jumps and puts together two 80 meter jumps with one solid telemark landing. Yes, one solid telemark landing. The other jump started off with a telemark but ended with a crash. Hence, I won the competition.

Last year I had pulled out my old trophies and decided to give most of them away to Todd Wilson for the Steamboat program to reuse the hardware. I let my daughter Mei Li and son Toddli keep one or two. One was the trophy I received in Berlin. It was actually an impressive trophy.  After reading the story from Scott Nichols it dawned on me that – thanks to Toddli-  I had that trophy from the last competition in Berlin. So to mark history: I got to compete in the last competition in Berlin, NH at the Nansen Ski Club and I won simply because Dennis had to use his trusty telemark landing. Sorry Dennis!  The picture of the trophy it shows the date. The other pic is me and my son Toddli holding the trophy and his third place medal from his first competition in Steamboat last year. He is hooked now.

Certainly it was a fun weekend at Berlin and Nansen Ski Club did an amazing job putting on this historical competition marking the end of a great era. I guess I didn’t realize it at the time but now knowing all the hard work that goes into running jump programs it is really nice to see restoration of jumps to bring back what was lost. I hope and pray that Nansen carries on a great tradition yet again. Blessings to everyone this Christmas and Happy New Year. 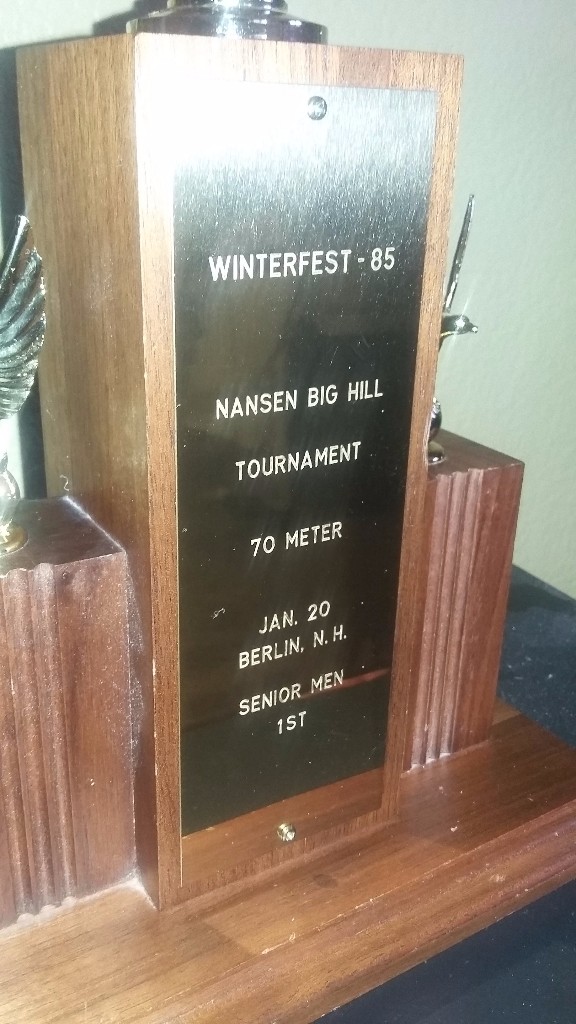 Evidence from the last tournament held on Big Nansen… a win for Todd Scholl.