CURATOR’S NOTE-  No words.  Only in America. 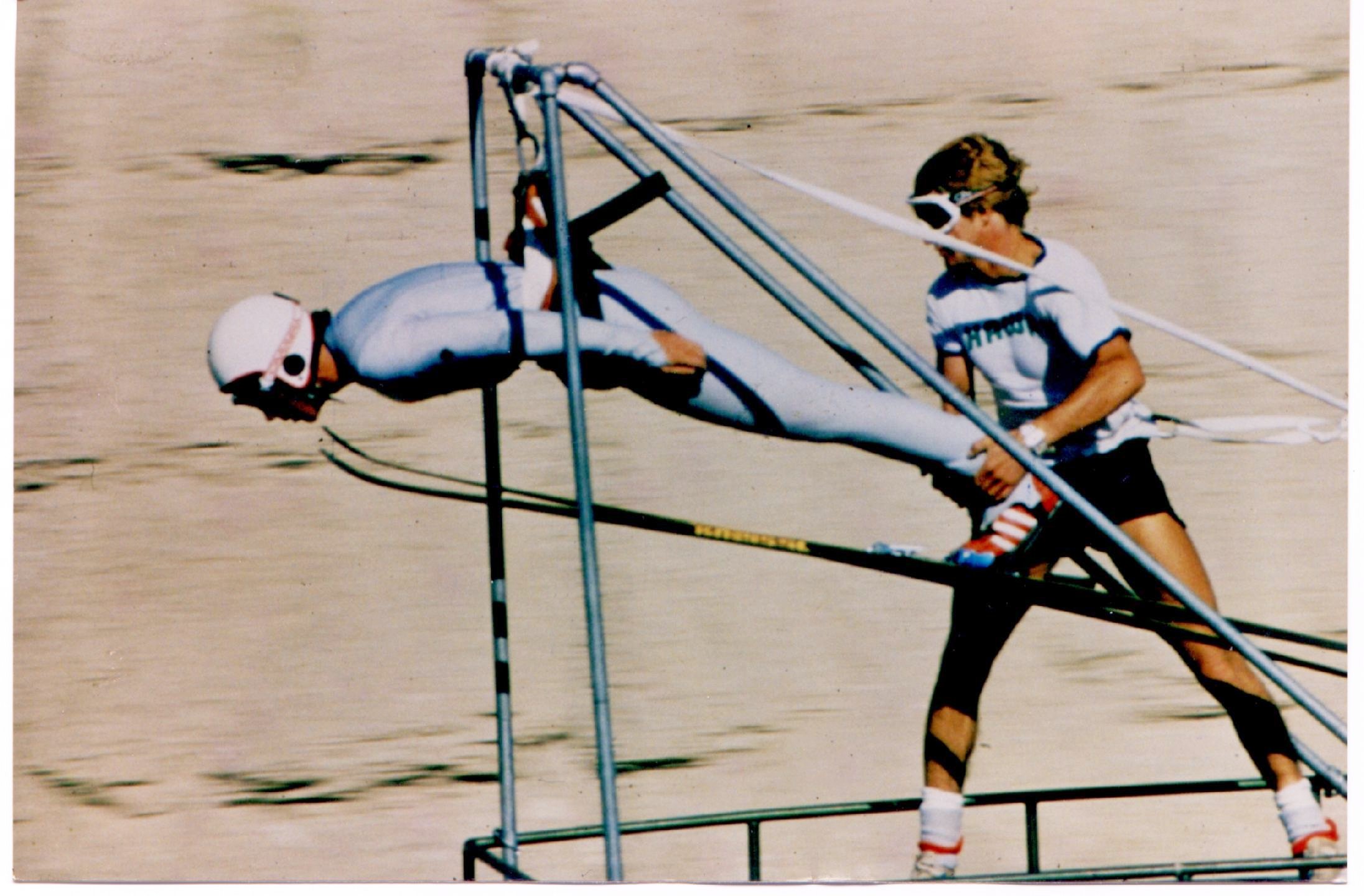 POVERTY IS THE MOTHER OF INVENTION.  Nordic combined teammates Pat Ahern (hanging) and Kerry Lynch (holding) get air time on top of a van speeding 60 mph down a 4 mile stretch of straight highway in this 1982 photo.

Back in the early 1980’s the U.S. Nordic Combined team did not have much money, but we did have great enthusiasm and an abundance of creative thinking.  We had training for a couple of days in a wind tunnel in Buffalo, NY, but that was short term with each athlete getting about 10 minutes of testing.  Further, it was difficult to apply and practice some of the possible techniques that might improve our jumping performance.  Furthermore, building our own wind tunnel was obviously a bit of a budget buster.

Not to be deterred, we found that $130 of 1½“ pipes and fittings was enough to build a trapeze bar six feet above the roof rack of a U.S. Ski Team van and provide us with an alternative.  A jumper was suspended from the trapeze bar by a sling and climbing harness and flew down the road in full ski jumping gear.  A desolate stretch of highway north of Kremmling, Colorado provided a straight 4 mile route with several excellent road cuts for filming.

With an assistant tethered to the roof rack, the van travelled at an appropriate speed for the jump size down the generally vehicle free highway giving each jumper about 4 minutes of van flying to practice different flight variables such as adjusting ski width, hand, head and body positions.  Over the course of the summer each skier flew for many miles and accumulated hours of flight time.  Of course we had no strain sensors or other real measures of lift and drag to objectively evaluate what we were doing.  However, the time to visualize and try different flight positions and mentally prepare for the coming winter while developing a psychological edge may have been beneficial.

From a coaching viewpoint (mine) it was a good chance to discuss technique and develop good imagery while participating in a fun break from the daily rigor of training of both XC skiing and jumping.  Did it improve the team’s performance?  We will never really know but we did have greatly improved jumping results that winter and were generally perceived to be one of the top three world teams by the end of the season.  It was a breakthrough year for the US Nordic Combined team with a number of excellent results both individually and in team competitions.

How often does a ski jumper get to fly for over 15,000 feet at a time with for 3 or more minutes before coming back to earth?  It was a fun experiment, even if a bit insane.  There were many motorists who stared in disbelief and even stopped to watch.  We even had an audience of state troopers who watched in disbelief.  Luckily for us, they thought it was pretty cool and if it helped the US in the Olympics it had to be OK.  They found no reason to stop the flying and joined me in a cup of copy as the old green van few by us at 60 mph.

GET YOUR NAME ON THE WALL!