CURATOR’S NOTE-  Since 1992 Dr. John Speca has traveled as medical support for a number of USST teams.  This email from him gives a little history:  “I’ve been a team doc starting with jumpers in 92 til 99 then NoCo, but will be with jumpers this year in Zakopane.  My wife has been “part of the team” for about 10 years.  Billy also told her that her birthday gave him the inspiration to push to win the race.  She describes it as “plane fare for skier trip $1800, meals and hotel, $1500, having Billy Demong win a race for your birthday, Priceless!”  He had not yet won his gold but his was gold in my wife’s eyes.  Let me also say, It has been my pleasure to work with so many of the athletes, coaches, wax techs and host docs and local EMT’s through the years.“ 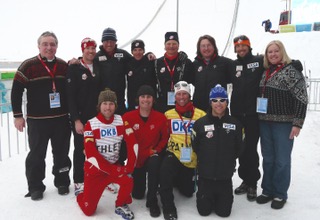 John and Debbie Speca with the Nordic Combined Team in Klingenthal, GER in 2009.

I was asked to switch my tour with US NoCo due to a change in their schedule.  It conflicted with not only Valentine’s Day, but also with our 30th anniversary and my wife’s birthday.  My wife thought it would be fun to go and accepted our switch to Klingenthal, Germany.  (Little did we know, this would be one of our most storied ski team trips.)

Our team had received new jump suits for World Championships, but they were delayed and had no time to get tailored.  I volunteered my wife to sew them and one of the Japanese who brings his sewing machine owed me a favor.  Billy Demong was the first to let Debbie tailor his suit and one by one, she eventually tailored 7 jump suits for our team!

Sunday was her birthday and she told Billy he needed to pay for the alterations by making the podium.  (He had just had a third that day.)  When he asked me if it really was her birthday, I told him it certainly was.  He jumped to 7th place and came into the stadium in 4th.  As he passed right in front of us, he was shoulder to shoulder in 3rd.  As we waited at the finish line, Billy won the race.  Amid all the shouting and congratulations, he heard my wife as he was removing his skis, looked up and said “Happy Birthday, Debbie!”  She still holds this birthday as her best!  Thanks Billy. 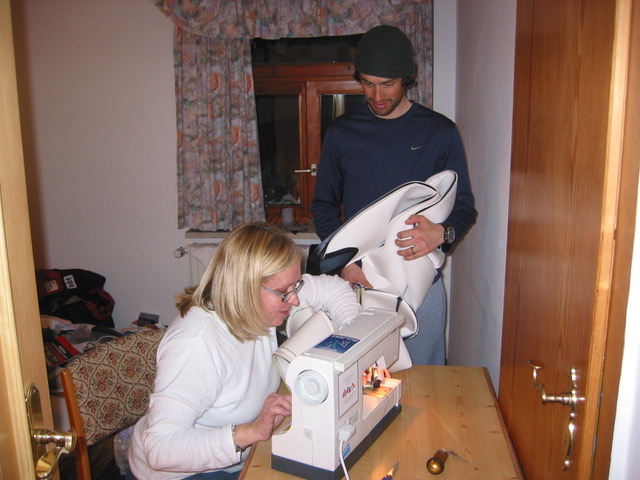 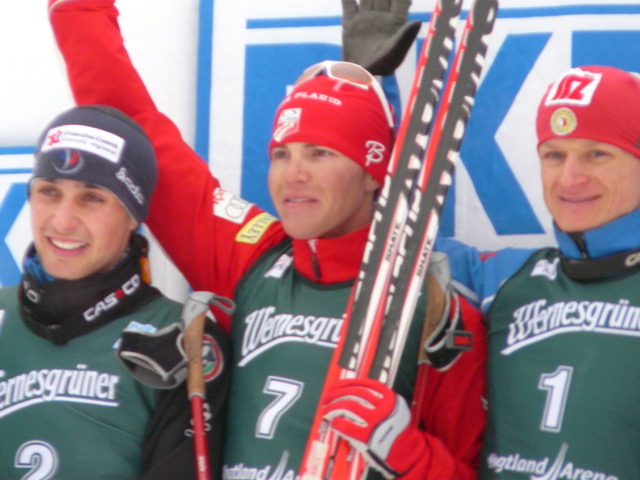 Billy Demong on TOP of the podium for John and Debbie’s big day.

GET YOUR NAME ON THE WALL!