CURATOR’S NOTE-  Gene Kotlarek, referenced in the story, below, was an internationally renowned ski jumper and among the best in the world in the 60’s.  With style like you can only dream about.  Gene passed away last month at age 77 but wrote a great story for the Story Project in 2012; to see it, click here.  You’ll find a photo there that gives a clear indication of the style he had. 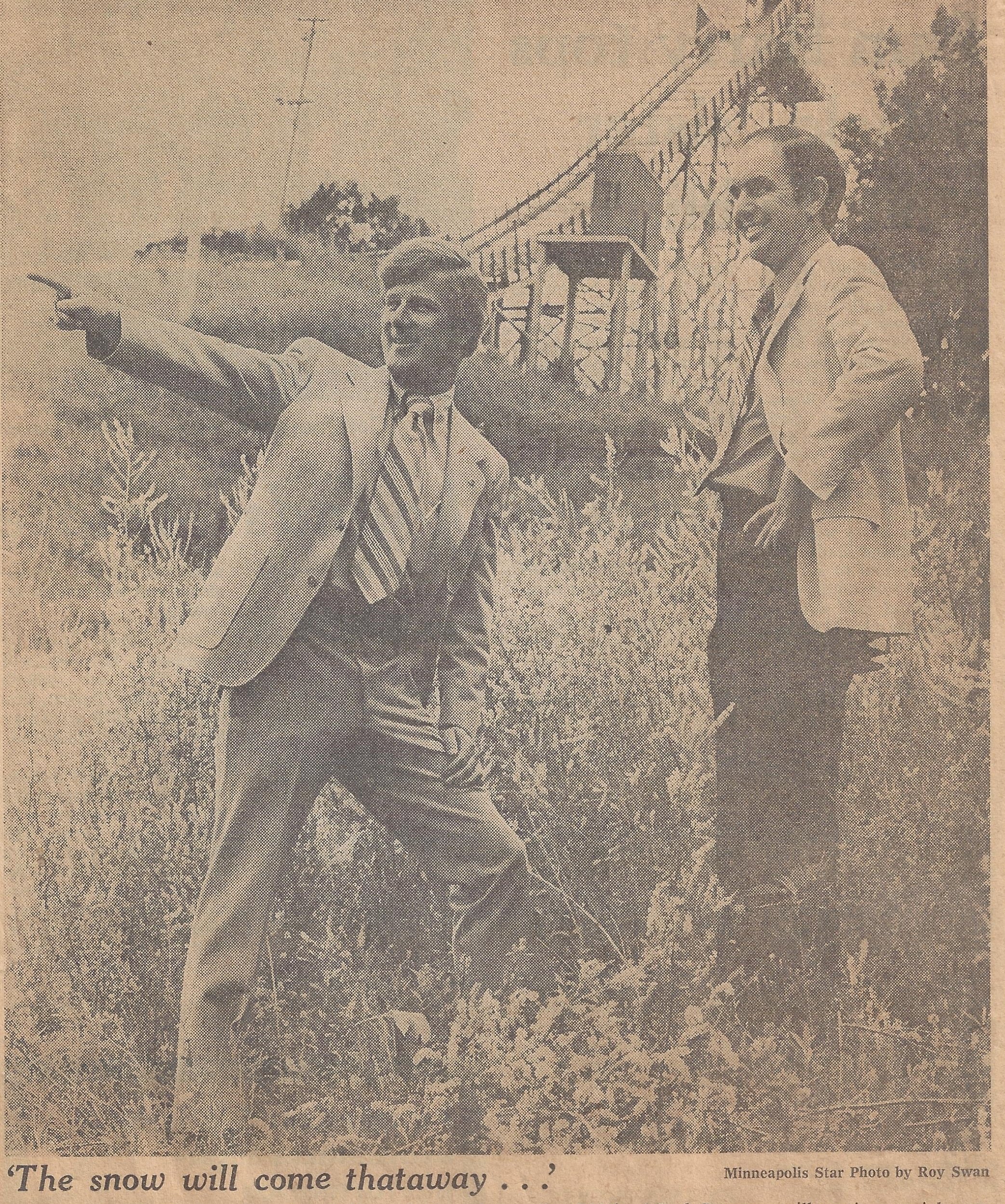 Jim Balfanz (L) and Gene Kotlarek (R) pose for a photo at Bush Lake ski jump.  Jim has the backstory below.

This picture is from 1972, and shows Gene Kotlarek and me at Bush Lake ski jump as we announced that for the first time since 1938, Minneapolis would be hosting a National Nordic Championship.  In fact, the Men’s and Ladies Cross Country Championships and Nordic Combined Championships were awarded to the Minneapolis Ski Club, and the North Star Ski Touring Club for late January, 1973.

On that trip, I was also able to present Ed Brisson, the Minneapolis Ski Club’s outstanding jumping coach, the RUSELL WILDER MEMORIAL AWARD – for his outstanding contribution to youth in skiing.  Ed went on to become the Head Jumping coach for the US Ski Team for many years, as well as becoming one of the best experts on ski jumping hill preparation and safety in the entire FIS.

Minneapolis went on to do an outstanding job of hosting the National Championships.  Mr. Lars Kindem, chairman of the USSA Central Division Cross Country Committee and Norman Oakvik ( National Nordic Combined Champion in 1954), helped lay out new, more difficult cross country trails for the event.  Ed Brisson and the rest of the great coaches and officials conducted well run jumping events as well. In addition to Norman Oakvik, Jay and Jerry Martin – both national jumping champions and Olympians provided tremendous assistance for the jumping events.  So many other terrific people helped make those championships some of the best ever conducted to that point in our Nordic history.

It should be noted that Gene Kotlarek was a five time National jumping and three time North American Champion between 1957 and 1967.  Gene was actually from Duluth, MN, but was living and working in Minneapolis at the time and was most gracious to come out to help provide support for the events.

The Minneapolis Ski Club has produced many national champions and Olympic competitors over the years.