122 DONORS!  THE AMOUNT IS NOT IMPORTANT, PLEASE SHOW YOUR SUPPORT AND JOIN THIS FAMILY!

Curator’s note-
Earlier this month Jim Holland reached out to three of his Hanover High School buddies asking if they’d write a story and send it in.  Each did – a testament to both their friendship and the impressions that ski jumping leaves, even on those who only competed in high school.  Given the common theme in all three stories- basically that Jim Holland forced them outside of their comfort zones- , they are presented together in this one posting.  Thank you Aaron, Brady, and Dave!  And to Jim for getting the ball rolling… in SO many ways! 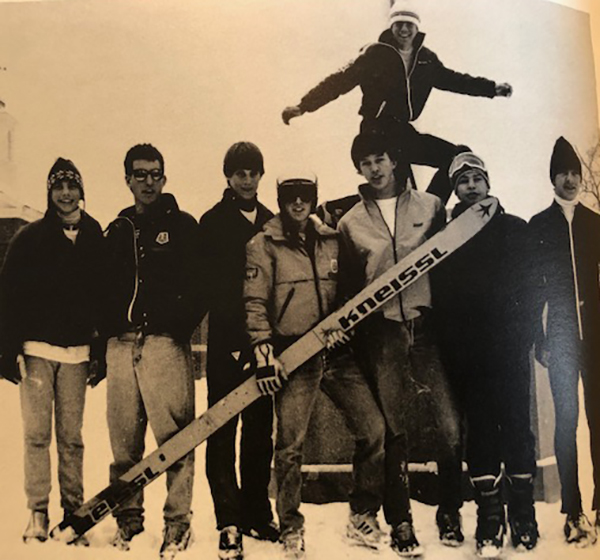 Where they all came together: The yearbook picture for the 1985 Hanover High School ski jumping team.  From left- Nick Orem, Tom Carey, Mason Dwinell, Jim Holland, Brady Toensing (story below), Adam Smith, and Jeff Stevenson with Greg Prince behind them.  David Peck (story below) recalls that he was free skiing at Killington the day of this photo.  Aaron Loomis (story below) was actually on the hockey team, a detail explained below. 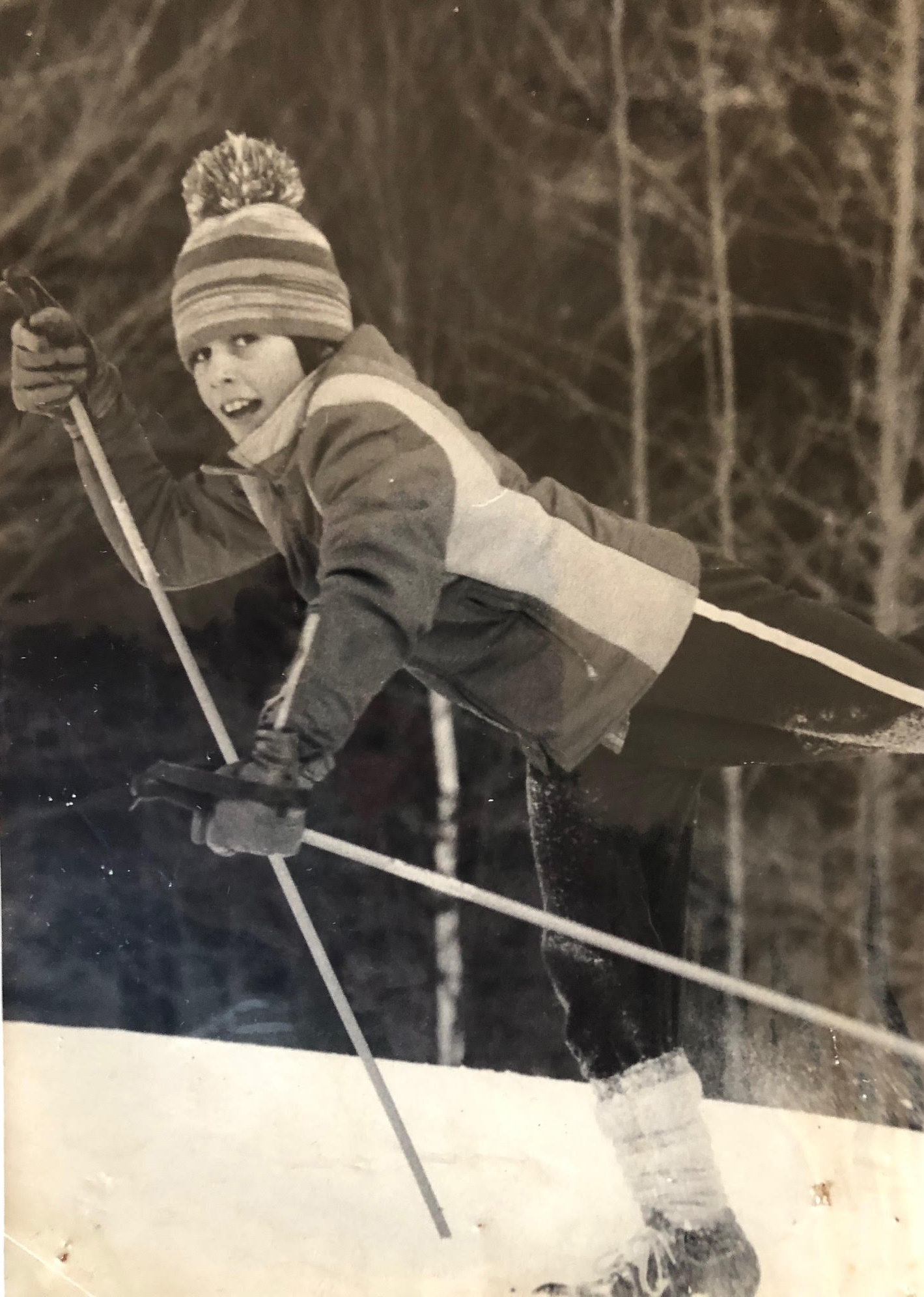 David Peck (with both feet safely on the ground )flashing some fancy XC technique back in the 80’s.

“What the hell am I doing up here” I thought, as wind whistled through the sphincter-puckering tower of the Nansen ski jump tower (Berlin, NH), at the time considered an 80-meter, and by far the biggest, scariest jump I’d tackled in my brief jumping career. More due to good fortune and a background in freestyle than any particular Nordic acumen of mine, I’d ascended from the Oak Hill 20 to the Gunstock 70m in my first season as a jumper without any crashes or injury; and except for the first tentative rides off the Dartmouth 40m–a high-altitude tower I’d only ever stood on prior as the culmination of a late-night vodka-fueled attempt to get to second base with a fetching lass named Nancy–I’d never really been scared before on a ski jump.

But Berlin was a whole different animal. Monstrously high off the ground and constructed of old trestles like the infamous Cyclone coaster at Coney Island, it towered over the landscape like some giant gallows. The day of the meet was cold, gusty, with the flattest light imaginable. Climbing up the tower for the first time I was clearly gripped and looking down at each step I took, so Jim Holland and Tad Langlois thought it would be therapeutic to stand on top and physically sway the tower for me (the tower was already swaying perceptibly in the wind, and looking down the inrun I saw the tracks moving side to side), laughing maniacally at my terror. To boot, there were actual US ski team jumpers competing at this meet (I believe Nils Stolzlechner, Rick Mewborn, and Todd Scholl were all competing) so I was feeling doubly self-conscious.

Needless to say my first jump didn’t go as planned. My half-assed takeoff was miles late, and I managed to wheelie to the end of the knoll and starfish down the humongous landing hill, losing both skis, my goggles, and one glove but miraculously without injury. Humiliated and quivering, I sat in the team van with the heater blasting and tried to work up the gumption to do it again. I sat out the next round but with some honest persuasion from Jim I hiked up and managed a standing jump about 30 meters shy of the P point (I think my speed through the transition rivaled the current speed skiing record). I never tackled the big hill at Lake Placid and retired after that season so I could focus on my freshman year drinking at UVM, so the Berlin jump is still the zenith of my jumping experience that haunts my dreams.

BIG TOWERS IN THE EAST 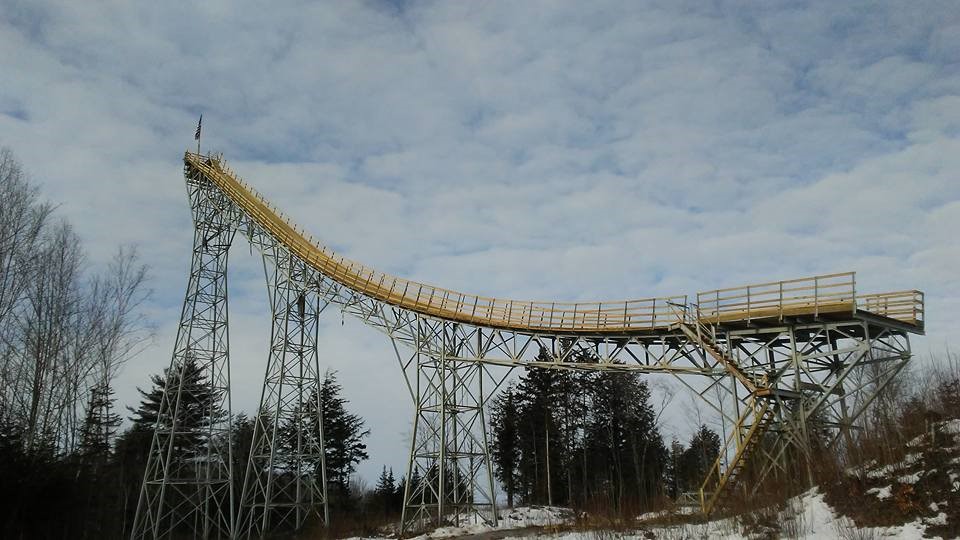 The Berlin “slide” referenced by Dave, above. 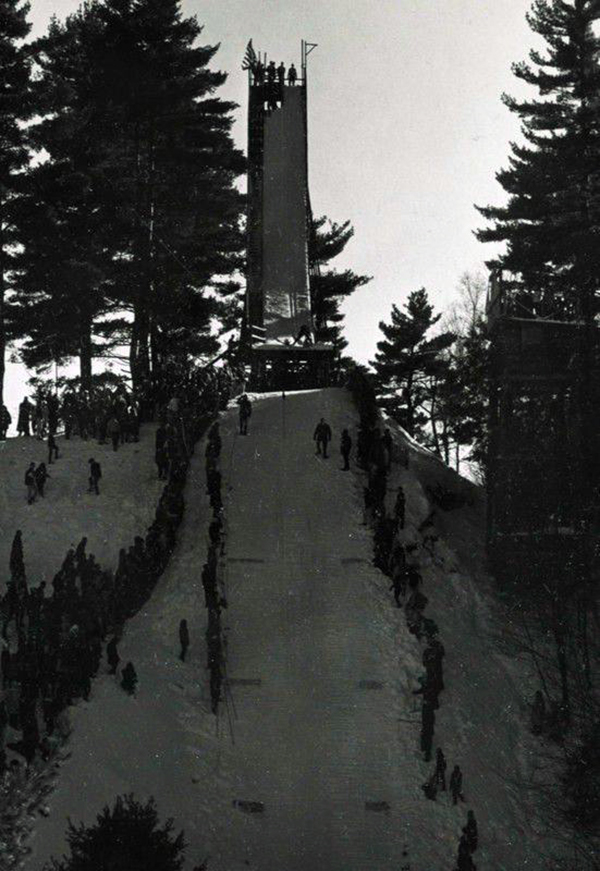 The Dartmouth ski jump that Brady discusses, below.

The morning of the meet I loaded my car with my hand-me-down jumping equipment, including yellow skis, a shiny red ill-fitting suit, and blue Adidas boots that were two sizes too big for my size 12 feet. Driving into town, I turned on the radio and the Don McLean song “American Pie” came on:

A warning? Or worse, an omen? That day I was moving up from the 30-meter Oak Hill jump in Hanover to the 45-meter during Dartmouth’s Winter Carnival.

I put on my skis and stood at the top and stared down the ice-glazed tracks as the jump swayed in the howling wind. My heart thumped. I thought of the song that morning and tried to tamp down fear and panic. A man with a fur-lined hood stood on the knoll gripping a red flag. I could hear it snapping in the wind. I was told that when he dropped the flag it meant the gust had died and I had to go. The flag dropped and I pushed off the platform, but I hesitated a bit which put my weight back, causing my skis to jump from the icy tracks. Just then my teammate, Jim Holland, was climbing up the jump’s steps along the in-run and I was headed straight for him. I saw his eyes go wide just before I quickly shifted my weight forward and somehow got back in the tracks, shaking the vision of recreating Vinko Bogataj’s Agony of Defeat.

I hit the takeoff and flew like a rock, barely landing it windmill style. Jeff Hastings, my ever-positive coach, told me as I walked past him on my way back up that he had been sure I was going to crash, but that I had done a nice job flapping my arms and keeping my balance. 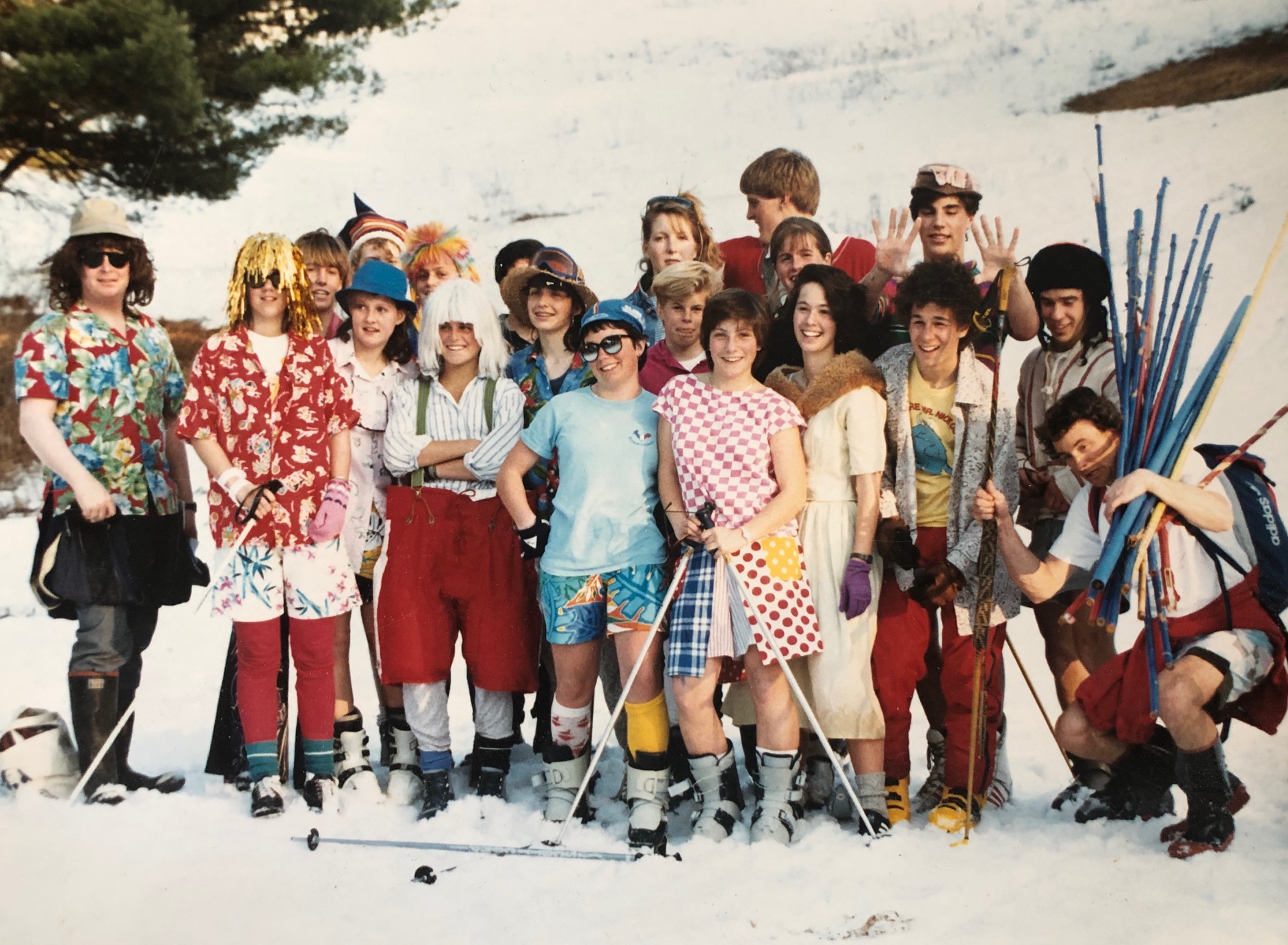 Post event photo from one of the (later) Front Throw Classics.  Looks like Heidi Weider Nichols in the front row btw.

Memories from the “Front-Throw Classic” ski race at Oak Hill.

Way back in the 80’s back I was dragged into a ski race, the infamous “Front-Throw Classic”.  I happened to be classmates with Jim Holland at Hanover High School, I guess that was my in.

I was a hockey player at Hanover (NH) that for a short time was on the HHS Nordic team. In the 70’s I skied with Ford Sayre program and made it to the “D” level, I still have the blue bar you were supposed to sew to your Profile ski jacket.  All this said I had no business being a part of this race.

The race was at Oak Hill. The only rule was that you had to use one pair of skis during the race.  The race had 3 parts:

The day of I picked my Elan RB racing Nordic skis as my ski of choice, put on a trench coat and wrapped one of my father’s ties around my head.
I have vague memories of going down the 20 meter jump– But I do remember realizing that as I went airborne I should have traded my trench coat for hockey pads.
My landing off the ski jump was a mess. I tumbled down the out run. Jim and other phenoms like Mary Seibert, Dave Peck, Scott Bonz did perfect landings.  Many of the racers used heavier alpine skis and boots (tele skis hadn’t penetrated Norwich at this point) that were and advantage for the jump and slalom but a serious liability for the endurance segment.

Truth be told my tumble down the out-run only affected my body, not my time, and my choice in skis payed off as I passed many of the skiers shuffling in alpine boots.

The slalom down the lift line was mostly ice, very narrow and harrowing. I think it took me more time to descend the slalom portion that the endurance bit. Some may remember the J-Bar at Oak hill was in the woods, and it seemed only 20 feet wide at best.  This was a low point for me in the race as my bruises sustained from the ski jump were punished as I was unable to set an edge into the icy slope with my skinny skis.

I’d like to say I finished mid-pack but it is more likely I was in the bottom 10.

Competing in the “Front-Throw Classic” is a great memory that really should be repeated.