Curators Note: There are so many who feel touched by ski jumping and nordic combined and thus a desire to give back. Scott and Heidi are some of those who have given back in many ways and continue to inspire us all to continue to work hard and give back to the sports that unite us. Thanks for all you do! 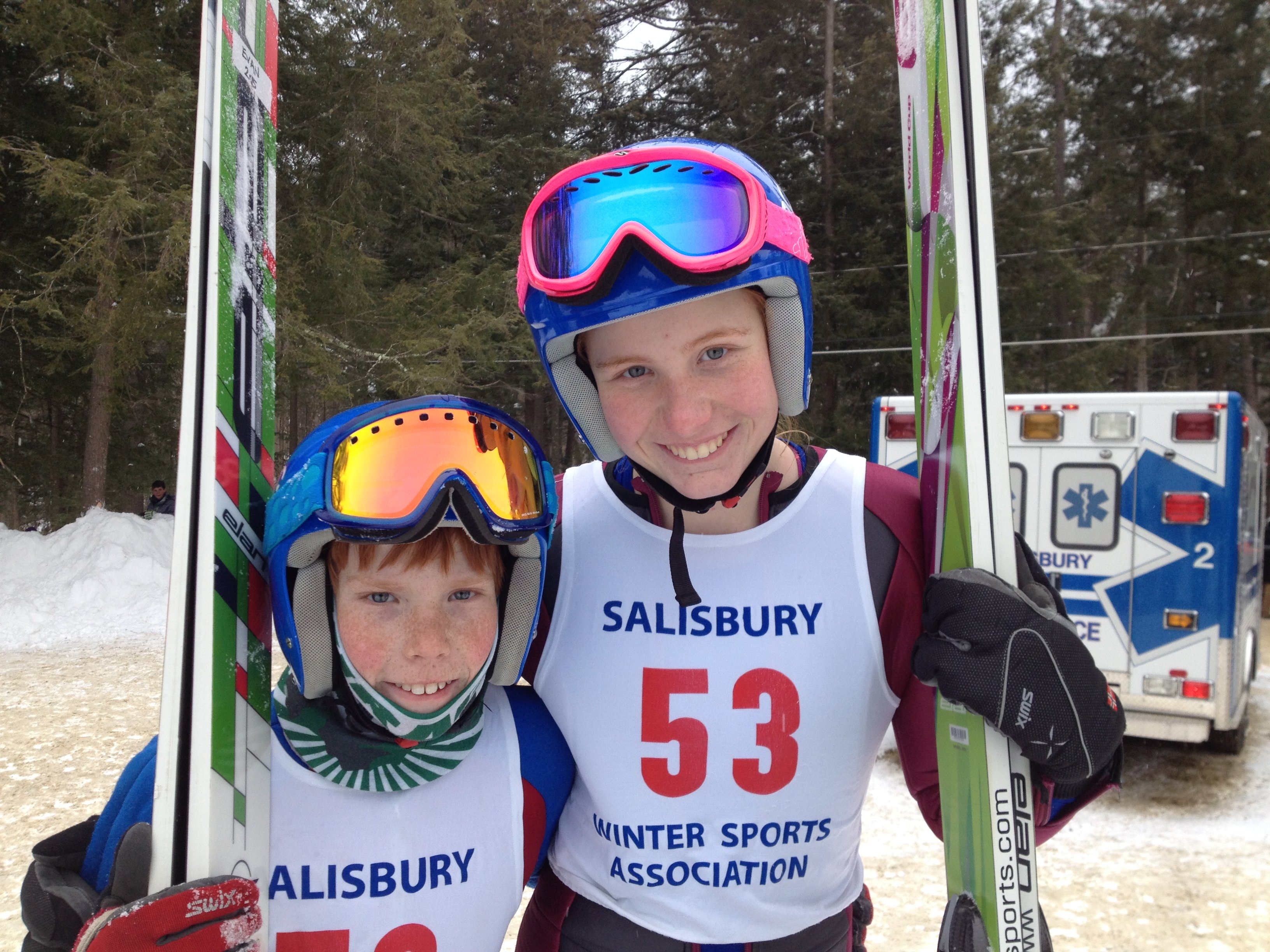 Evan & Casey Nichols share a smile… and appreciate the support of their many coaches and mentors over the years.

Thanks to a great community of coaches, parents and kids!

I knew I would love the sport of Nordic ski jumping the first time I took my kids to a jumping meet. My daughter, Casey, was 10 and had jumped on alpine skis for most of the previous season, only moving into jumping skis for the last few practices. My son, Evan was 8 and had never gone off a jump at all. It was January and there was no natural snow in the East and none in the forecast. Our club hadn’t had any practices, but there was a meet in Andover where they made snow. We decided to head to Andover despite the fact that we had no idea what we were doing.

As you can imagine, Casey and Evan were a bit intimidated about jumping in their first meet since neither of them had jumped that year (or at all), let alone competed. They had all the nervousness of regular competitors with the additional anxiety of having no idea what they were doing in the first place. I told them to look at it like it was their first practice, only with a number on their chest. Besides, with the winter going the way it was, this competition could possibly be the only time they jumped that season.

When we arrived in Andover without a coach to explain how things worked, I had no idea how to guide my kids. I soon found out that I had nothing to fear. After walking up to a guy who looked like he knew what he was doing and admitting my lack of knowledge and experience, we were promptly sent on our way to the jumps and years of love for the sport. The guy I talked to was Tim Norris, the long-time Andover coach.  Tim immediately took my kids under his wing and showed them the ropes. He taught Evan how to put on his skis and coached both Casey and Evan as if they were kids from his own club. This was the beginning of our introduction to jumping, and Tim was the first of many coaches to adopt my kids on the jumps and coach them through practices and meets regardless of which club they were from. Tim Norris, Jay, Luke and Zach Daniels, Mike and Joe Holland, Tom Dodds, Jeff and Chris Hastings, Jon Farnham, Nick Burke, Walter Malmquist, Josh Flanders, Tara Geraghty-Moats, Larry Stone, Taylor Hoffman, Colin Delaney, Evan and Andrew Bliss, Lindsay Van, and Alan Alborn are some of the many coaches who have taken my kids under their wings and taught them to fly. It’s this atmosphere that I fell in love with: where the coaches, parents and athletes from all of the clubs look out for all of the jumpers regardless of where they are from. Our family has made many lifetime friends through jumping, and we look forward to many more years of deepening those friendships and making new ones.