CURATOR’S NOTE-  The Dion family from Lebanon, NH was legend in ski jumping circles back in the day.  A couple of newspaper clippings, one from the late 1940’s, give some great insight into the early Dion days. 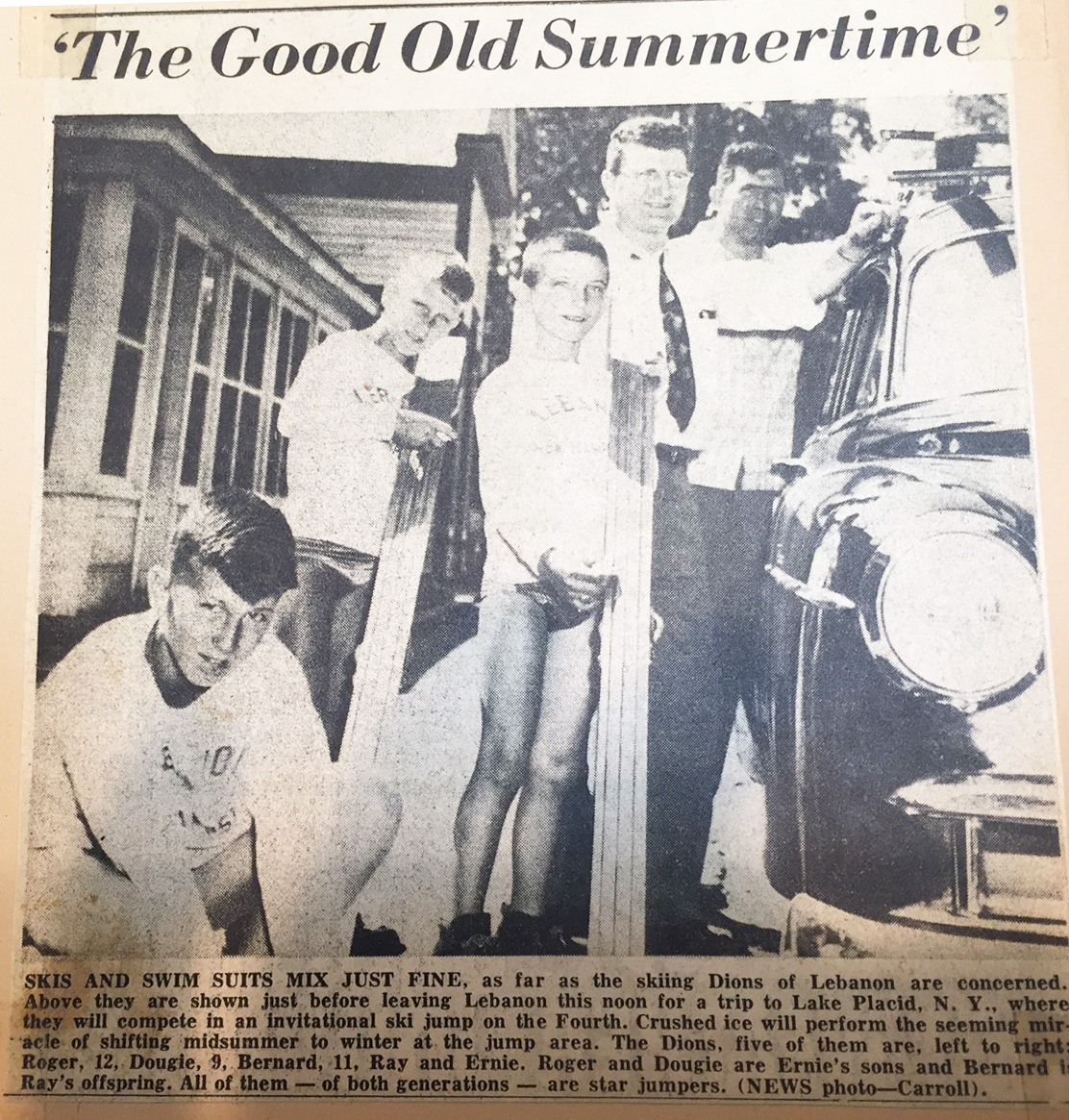 FROM THE SUMMER of ’52:  The caption in the local paper reads:  SKIS AND SWIM SUITS MIX JUST FINE, as far as the skiing Dions of Lebanon are concerned.  Above they are shown just before leaving Lebanon this noon for Lake Placid, NY, where they will compete in an invitational ski jump on the Fourth.  Crushed ice will perform the seeming miracle of shifting midsummer to winter at the jump area.  The Dions, five of them are, left to right: Roger, 12, Dougie, 9, Bernard, 11, Ray and Ernie.  Roger and Dougie are Ernie’s sons and Bernard is Ray’s offspring.  All of the- of both generations- are star jumpers.

Here’s  memory to share.   Not sure if the pictures are usable since there are from a newspaper printed in 1952 when I was 10 years old.  We were headed to a summer jumping meet on crushed ice long before they had even thought of the plastic surfaces used today.  In the pictures are my Dad Ernie, Uncle Ray (Bernard’s Dad), and Brother Roger, Cousin Bernard and me.  We were headed for either Laconia NH or Lake Placid, NY for a summer 4th of July tournament, because they were the only 2 places that had summer tournaments.   In today’s world they would probably think we were crazy to be jumping on crushed ice, especially since the jumpers for the most part helped cover the hill for a couple of hours before they jumped on it.   Time was always of the essence because of how fast the ice melted and how long it took to cover the hill, which is why they only put on as much as was necessary.  The in-run had barely enough crushed ice to have a set of tracks on it and not melt before the last guy jumped, the landing was not very wide and had enough to land on for a couple of hours and only to where the outrun began… which had hay on it.  So, beside trying to jump as far as we could, the goal was to land on the ice, don’t  fall and when you got to the outrun you wanted to be prepared to slow down in a hurry cause hay wasn’t near as fast as ice…

Don’t let the picture be misleading, we jumped with ski pants and sweat shirts, not swim suits because if you did fall, the ice and/or hay would be uncomfortable to say the least.   We never thought of it as being dangerous, and I can’t ever remember anyone getting hurt, it was just a lot of fun.

Another picture that might bring a smile to your face (see below).  It was taken next to a jump carved out of the woods on the Meriden Road close to Kimball Union Academy.  I really don’t know how far we went but by the height of the take-off behind me in the picture it looks like we had fun.  How far we went was related to how far up the hill you wanted to climb, how high in the air you dared to go and how close to the bottom you wanted to land.  Oh yeah, and we usually skied until the sun went down and couldn’t see the landing anymore.   Through it all we never feared because we always knew Dad wouldn’t let us do more than he thought we could handle.   As for me personally, my incentive was to try to keep up with brother and cousin.   After all, I was way over 4 years old, been practicing walking for over 3 years, and all I had to do was follow deep tracts strait down the hill, and stay on my feet until I stopped.  Easy! Right? 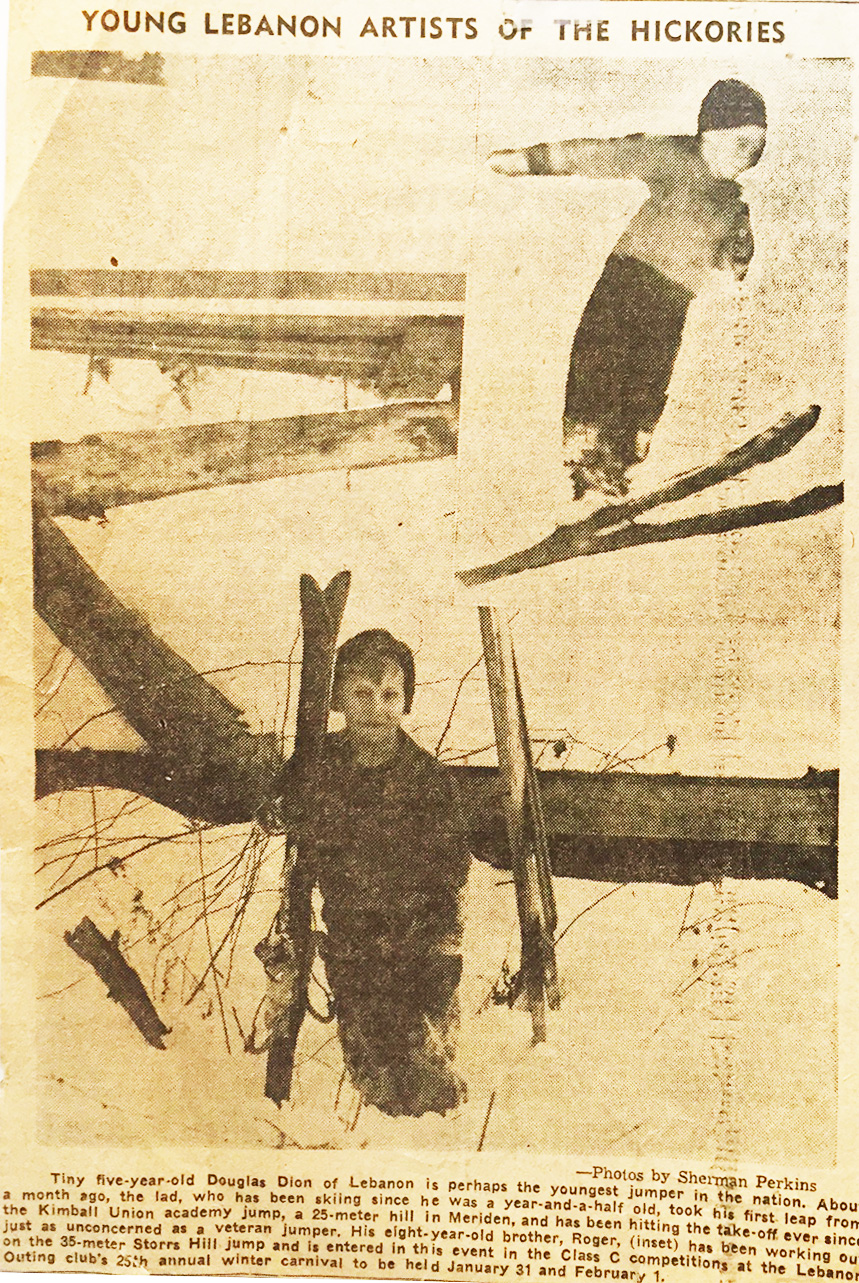 FOUR YEARS EARLIER (1948?)… the caption reads: Tiny five-year-old Douglas Dion of Lebanon is perhaps the youngest jumper in the nation.  About a month ago, the lad, who has been skiing since he was a year-and-a-half old, took his first leap off the Kimball Union academy jump, a 25-meter hill in Meriden, and has been hitting the take-off ever since just as unconcerned as a veteran jumper.  His eight year old brother, Roger, (inset) has been working out on the 35-meter Storrs Hill jump and is entered in this event in the Class C competitions at the Lebanon Outing club’s 25th annual winter carnival to be held January 31 and February 1.