CURATOR’S NOTE-  The email from Dave by way of introduction: “I met Bill Demong in June while he was in Portland with several of the team following some on-snow work in Bend, and I found it quite nice to re-connect a bit with the skiing world (which I essentially left in 1967 following my graduation from Williams). He mentioned the story project… most of my experience was in the college skiing world (vs national team), and I shifted to mountaineering following college rather than staying in the sport across the decades.”

Dave’s piece below is a tribute to many things past, not least of which is Ralph Townsend, an iconic New Englander who coached of the Williams Ski Team.  Ralph was inducted into the US Ski and Snowboard Hall of fame in 1975.   You can see his induction page by clicking here. 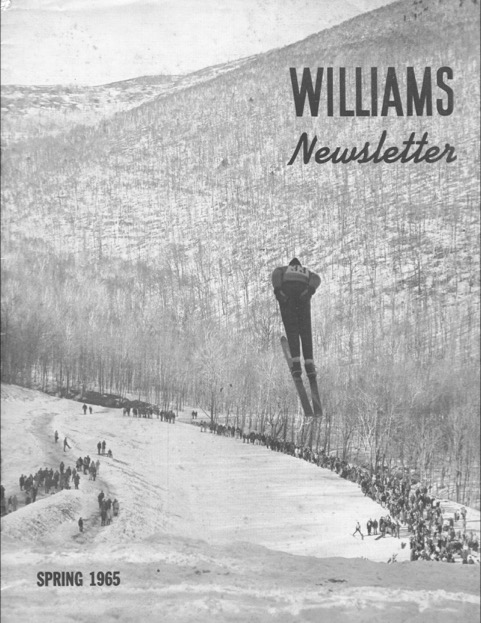 DAVE RICKERT soars over the knoll on the Berlin Mountain K55M at the Williams College Carnival in February 1965.  Ski jumping was an NCAA sport and a highlight event (note crowds!) on New England winter carnival circuit until 1980 when NCAA dropped the sport.

With endless hours on cold, snowy and dark New England roads, we became very (very) good at this recognize-the-car-with-one-headlight-out game. In a sense — okay, we’re stretching things a bit, but not too much — it was also good training for slalom. In both cases, the eye sees something, and the body must immediately react, with no time for actual thought.

The ski season had started months ago, well before the first classes. We met one year in Hanover, and started north on the Appalachian Trail. On top of the first hill, with a good view to the north, one of us asked: “Will we get to that mountain up there by tomorrow night?” We crossed it before lunch that day. We moved quickly. Heavy packs. Long days. Good training.

We roamed the hills around Williamstown all fall. Pine Cobble. The Taconic mountains. North Dome. And Greylock, with the annual race to the top. The rules? Only one — no running, because that’s too easy.

The Holidays were spelled “training camp.” We met at Williams if the snow was good, somewhere else if not. Each year had a pattern — Lyndonville over New Year’s, then Franconia, then the Putney Relays.

Soon, the Carnivals were upon us. Leave first thing Thursday morning (skiis, boots and poles for every event you’re in, with the the porcupine always full). Downhill practice that afternoon, downhill and X-C on Friday, slalom and jumping on Saturday. There was always a lot to do — figuring out the wax, getting the right people to the right places, moving jackets from top to bottom and information from bottom to top. And sleep was difficult, on cots in a gym, with a hundred types of snores.

Then off to the Sunday race, and finally back to Williamstown late that night. Monday was a rest day, Tuesday was an X-C workout, and Wednesday jumping and alpine practice at Berlin.

Berlin. A good mountain. But more, two men — Frenchie and the Old Man. And, of course, the snow cat. Other teams had fancy stuff like ski lifts. We were tougher.

Speaking of tougher, we didn’t eat pie all winter. And when we saw the Dartmouth team enjoying pie, we knew we could beat them.

We ate out a lot, on these long drives. Quantity trumped quality in our minds, with ravenous bodies needing fuel.

Slowly, the warmer weather returned, and we ran out of races. One year, we concluded the season with the NCAA meet in Sugarloaf. The official language of the big Western teams seemed to be Norwegian.  They appeared super-human … until we watched closely, and found they put on their skiis one-at-a-time, just like us. A good lesson.

And then the ski season was over. Only it wasn’t. We kept active — on the track, on the trails, diving in the pool, lifting weights.

He was listed in the Directory as the Varsity Ski Coach or something like that. In fact, he was the Professor of Becoming a Good Human Being and Living Life Well. He also knew a lot about skiing, and developed effective ways of helping us “dubberdoos” learn to “angulate” and avoid “difrugalties.” He also knew a ton about being a competitor — something almost harder for us to learn than the actual skiing.

With Coachie, Williams got a two-fer. Brother Paul joined us almost every weekend, with his own brand of Towsendian philosophy and expertise.

What’s left, after all these years? Maybe a couple pieces of silver. Likely more than a few memories. Certainly some friendships that have stood the test of time. And the indelible imprint of a little fellow with a huge heart and deep wisdom. 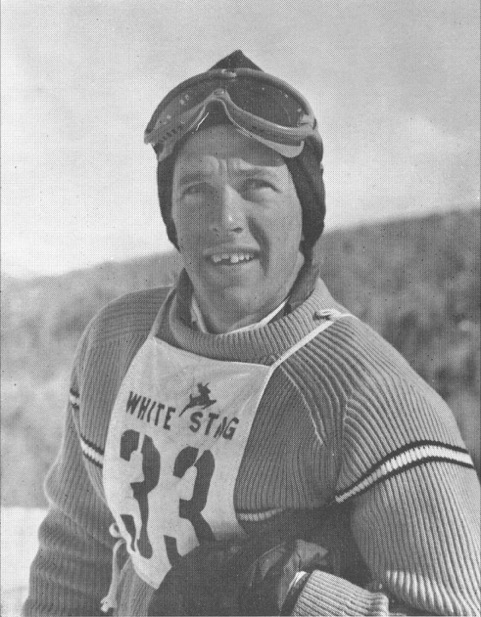 Dave Rickert- 1965.  Dave moved west after college and began his career with a fledgling sneaker company in the Portland area:  Nike. 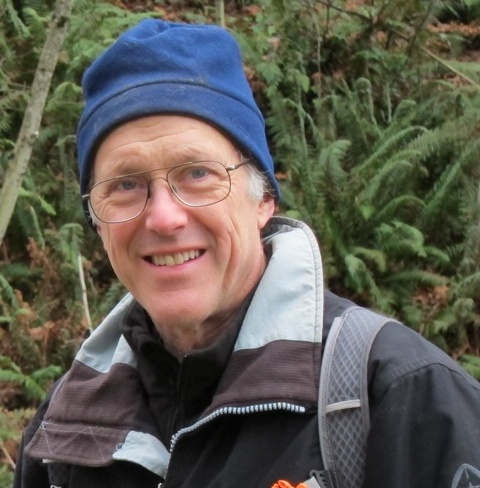