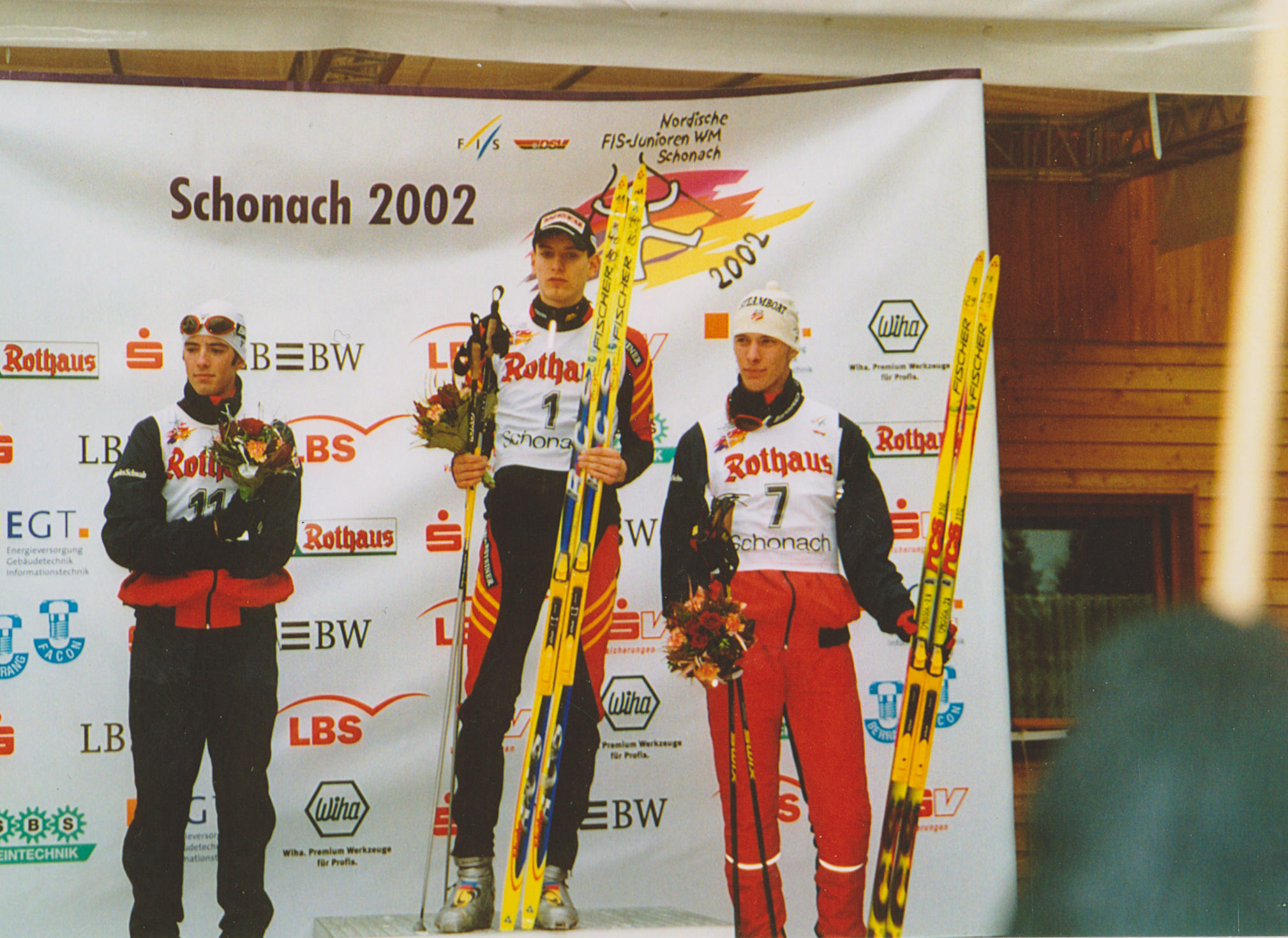 JANUARY 23, 2002- A BANNER DAY FOR THE USA!  The 2002 World Junior Championships in Schonach Germany where author Alex Glueck was silver (L) and fellow American Nathan Gerhart (R) was bronze.   German Bjoern Kircheisen won gold.  The unlikely story is below.

I was once told by a young woman that my friends and I have more stories than anyone she had ever met. She didn’t realize, but by friends she meant teammates, and to be honest, she didn’t know the half of it. Since I was six years old, I’ve been hanging out with the same five guys. It’s not as often these days, but we still meet up when we get a chance. It’s just the nature of the sport that ski jumpers stick together. For whatever reason, we’ve all got that group that we still keep up with, even though most of us have spread out across the country. There are a million stories to tell, but one stands out above the rest.

Going into World Junior Championships, I hadn’t had a single noteworthy result. I’d spent November and December at home, and had only skied in two “B” cups the week before. I’d made the team, but no one was expecting much.

Nathan Gerhart, on the other hand, was on a different trajectory. Nathan had been skiing well all season. He’d even taken the last “B” Cup off to rest because we all knew that he was going to medal. The only question was what color it would be.

The day began with a good amount of luck on the hill. After a first round effort that placed me in 31st, I was poised for an underwhelming result. An undeniable gust of air on my second jump moved me up to a tie for tenth going into the race. No one expected that, least of all me.

Nathan sat in sixth place following the jumping. His first jump had put him in 14th, but I like to think he may have been a little inspired going into his second jump (I rarely out jumped Nathan in competitions). It was only a few meters farther than his first jump, but it was enough to make sure he was in the lead pack.

The race started, the leaders went out, and I had no idea what I was doing. It’s not that I didn’t know how to race, most people who knew me growing up knew that jumping was not my forte. I didn’t know my place. That race was full of future star power (Tande, Edelman, Kircheisen, Moan, etc), and I had absolutely no idea. What I did know was that my skis were fast, and I felt good.

It’s worth pointing out that I was skiing on a famous pair of skis that day. Bard Jorgen Elden, the Norwegian star turned US coach, had loaned me a pair of skis that were well known on our team. Bard had used them when he was an athlete, and then passed them down through our ranks. I’m not sure of all the skiers that had seen success on those skis, but for that day the “Pink Atomics” were mine and they were rockets.

By the second lap, I had caught the group. Everyone was busy playing games, no one wanted to take the lead. We got to the bottom of the last big hill, a group of ten or so, with only one skier out in front (way out in front). Everyone stood up, I yelled (something profane I’m sure) and I went. That was it. By the top of the hill I was alone.

I crossed the finish line in second and turned in time to see my tallest (and best) friend just a few seconds behind me in third. The feeling was truly unreal. The winner, Bjoern Kircheisen, had crushed the rest of the competition. In true champion fashion, he had jumped to first and skied the fastest time. It really wasn’t even close, but we didn’t care. To be honest I think he was annoyed that we were so excited when he’d embarrassed the whole field.

After the race, we had doping control. I was so dehydrated that by the time we got out to the press conference, half of the reporters were gone. We fielded some questions, more than a few relating to the German translation for my last name (luck). To celebrate we treated ourselves to a pizza and one beer, then called it a night.

Now, nearly 16 years later, that day is still one of my best days. But not for the reason people might think. Sure, it was great to get a medal. It’s an accomplishment I’ll always carry with me. But the medal is packed away these days and I sure can’t ski like that anymore. What really made that day special was being able to share it with a teammate and a friend. It’s not often in life that we get to share the stage with each other. Especially in an individual sport, victory always means a loss for someone else. That day I got to share victory with my best friend and for that reason, it’ll always be one of my favorite stories and best days. 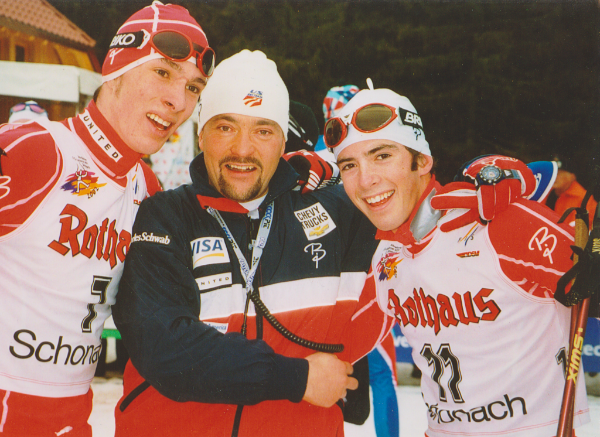