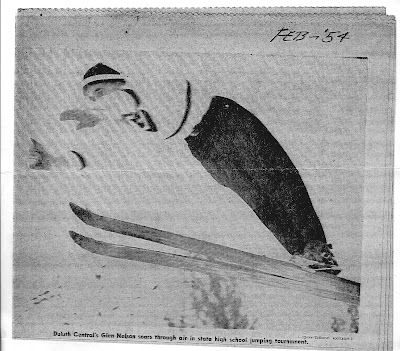 STORY No. 34
GLEN NELSON
Age 76
Duluth, MN
Duluth Ski Club
It was 1958 and I just gotten married that fall and was skiing pretty hot…Building points for the Winter Games in Cortina, Italy.  I was at the tournament in Mpls or St Paul (can’t remember) skied quite hot, so I thought, and the Duluth Ski Club members thought so also.  Only to find out the judges from Michigan selected a team from Michigan.  They selected 6 skiers and I ranked 7th. That was the best chance I had to qualify.
In 1953 as a junior in high school (just placed 1st for the Minnesota High School State Jumping Tournament) a carload of Duluth Ski Club members went to Steamboat Springs Colorado for the Junior Nationals. Upon completion of the competition Dan Kelly and I went to the top of the Howelson Hill and had several rides with Anston Samuelson (from St Paul Ski Club) and were clocked at 65 mph at the end of the bump…quite a ride!
I ended up coaching skiing at Proctor (MN) High School for several years. (jumping, cross-country and slalom).  I still ski downhill and cross-country several times a week, conditions prevailing. I have worked with the grandkids that are in town and have one that is skiing very good for Hermantown High School, (downhill) and lettered as an 8th grader and is currently a 9th grader.
Skiing has been a big part of my life and hope to have it continue for several years to come.
Editor’s note-  The Cortina Olympics were in 1956.  In email exchanges with Glen we couldn’t decide if these competitions were held in 1956 or whether he was trying out for the ’58 World Championships which were held in Lahti, FIN.