Age 38
Winter Park Ski Club
If I could tell but one story from my years as a ski jumper, what would “it” be? Tough call – a humorous tale like the one when one teammate borrowed another teammate’s ski pants and then accidentally crapped in them during practice (you know who you are Ethan McGraw). Or perhaps a life lesson version like when my ski coach (Greg Poirier) made me give some ski goggles I had “found” back to their rightful owner with an apology and a very clear understanding at nine years old between right and wrong? That may be a bit too serious for this crowd. How about my first beer at Octoberfest in Frankfurt that turned into my first few beers and my first hangover? I would not want to indict some current ski jump leadership like Alan Johnson for paying for the beers when I was but 14.
My chosen story begins with my first walk to the Winter Park ski jumps, nine years old and alone except for my rental alpine skis and poles. First person I met was Crosby Perry Smith, followed by Dale Thompson, followed by Frank Penny and Chuck Heckert, followed by Alan Johnson and then the young guy from the east, Greg Poirier (who turned 52 on Nov. 6th). Six coaches said hello before I had even made my first jump, each making me feel like an aspiring Olympian despite my fresh Texas accent and rental equipment.
“Put your skis on, lose the poles, grab the tow, get off at the first stop, ski down to the start – ask to be cleared, crouch then jump as far as possible.” This was my first instruction. After my first jump, the coaches gave me advise one by one as I made my way back to the lift. Crosby: “tuck your jacket in”; Dale: “jump harder”; Frank: mumbled something about putting in a “telemark landing” – no clue what that was. When I got to Alan he said, “you have a lot of potential. Give this note to your parents.”
The note said that I had a lot of potential and that for $50.00, I could rent real jump skis for the season and learn to be a ski jumper. It took days to convince my mom and dad that indeed I had potential and that Mr. Johnson was not just trying to get rich by conniving unsuspecting naive parents. Thankfully, despite the “ridiculously high” price tag, my persistence paid off. I became a ski jumper in January 1983 and that $50.00 changed my life.
30 years later, I am now a 38 year old husband, Dad and proud “has been”. I got engaged on the 50 meter at Winter Park and taught my son to ski in the outrun of the 20 meter last year, both with tears in my eyes. I am very grateful that Alan saw my potential and proud to be part of the skiing community, even if from a distance today.
OK, now it is time for the other “has beens” to step up with some good stories…don’t be pussies (DJ and Tim). 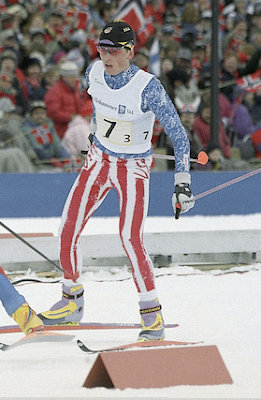