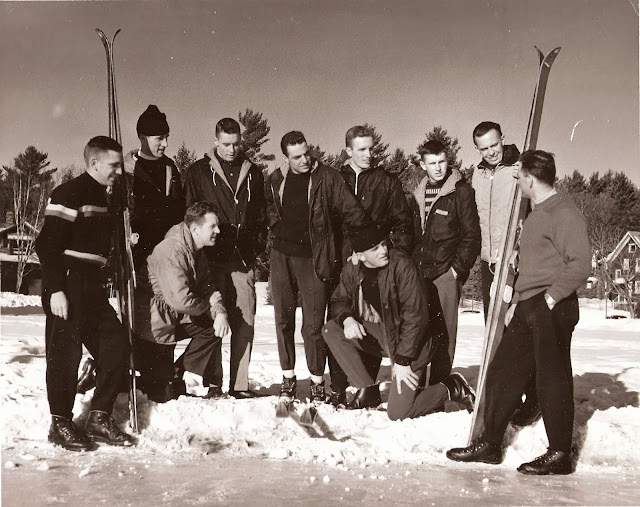 MARTY HALLGILFORD OUTING CLUBDURHAM, NHI moved into Gilford, NH just after WW II(1946), along with many other families who were leaving the cities for the best of country living. I was 8 years old and it wasn’t more than a few months  and the first snows were upon us and out the door we were skiing all over the place. Jumping was a natural and I had a night jump (light from the kitchen window) in my back yard—maximum jump 11- 15 ft. We built jumps everywhere and as we got braver finally put in a monster in the local sand pit—good for 40 ft. After school every afternoon it was onto our skis and out into the woods until dark. Soon, Gary Allen, graduate from Dartmouth and a pilot for Pan Am Airlines, organized us, along with the other fathers, into the Gilford Outing Club and we became a part of an organized jumping program at Gunstock, There were 3 jumps in the beginning, a 10 m, 20 m and a 60 meter—a 40 would be introduced in a few more years. At this time we had only one pair of skis for everything we did. Every year the 60 meter along with all the other big jumps in the East had a formal jumping competition, with thousands in attendance, and all the stars of jumping from the US and Canada, and sometimes a few Europeans. It was a big deal!!   After the competition this one year, all of us young guys were all at the village store, as we were every year, as the jumpers would stop here for gas and food, before the long drive home. Well, somehow in the conversation, one of the jumpers from Rumford had broken a jumping ski in the tip and had it for sale at $5. I said I would take them, but would have to run home, about 5-10 minutes, to get the $5—–ran all the way with my fingers crossed, that they wouldn’t leave and that my parents had the $5—$5 was a fair piece of change in those days. My parents came through—–you talk about a young boy—and his first pair of “REAL” jumping skis. They may have gone to bed with me that night!