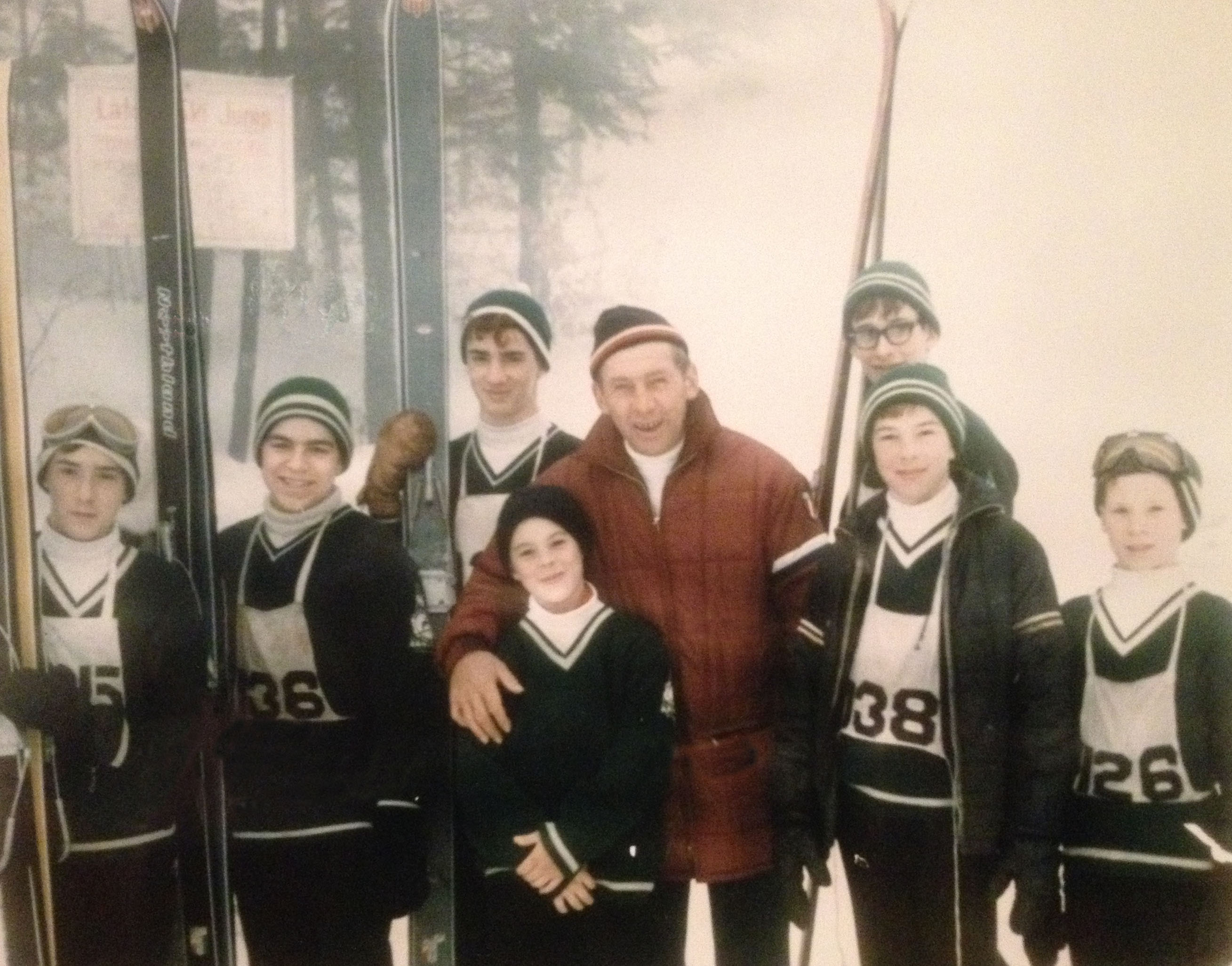 Ron Bell, Buz Zanello, Rex Bell, Roy Emerling, Art Tokle, Carl Berger, Carl Emerling, Chris Start.
Picture take at the base of the Latchis landing hill at Christmas camp. About 1964REX BELLAge 62Cape Elizabeth, MEGlenwood Acres Jumping Club, UNH Ski Team, Lake Placid Ski Club, US Ski Team, Harris Hill Organizing Committee, USA Ski Jumping rexsbell1@me.com I grew up in the 1950-60’s in the Boston Hills, about 25 miles south of Buffalo, NY.  Boston is in the snow belt and when Buffalo gets 1 foot of snow, Boston gets 3 to 4 feet. When we were young, my brother Ron and I played outdoors every day after school. We lived on a hillside, which made for great winter sliding experiences. Mom grew up during the great depression and she collected anything that had any useful life left to it.  When I was about 10 she scavenged a pair of 7’9’’ wooden skis with leather toe straps for bindings. (Which I still have.) One day Ron and I gave the old skis a try on the side yard hill and while almost every run ended with a fall we built a jump – just to make things more fun and challenging.  Santa found out how much we enjoyed skiing so on Christmas morning that year we each got a pair of new skis. 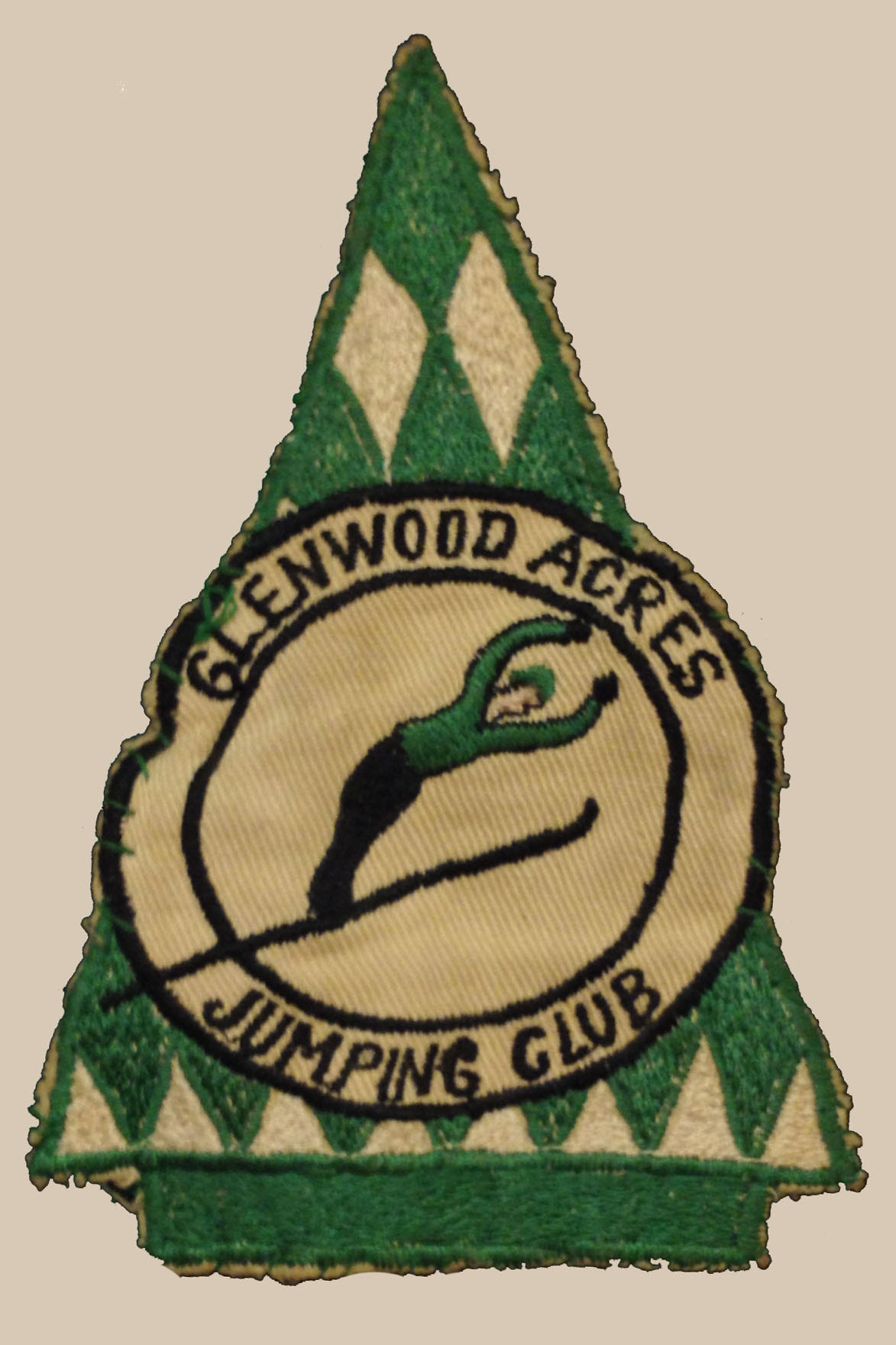 Dad bought himself a pair of Army surplus skis and took us skiing several times a week to a local park that had a rope tow. Eventually we out grew the park and got season passes to Glenwood Acres, a ski area 15 minutes from home. Glenwood had a T-bar, 2 rope tows and a 10-meter and 30-meter ski jumps.  It wasn’t long before Ron and I were taking jumping lessons along with 4 or 5 other kids.  To reward us for being so diligent with our lessons, that March Dad drove us 8 hours to Lake Placid to participate in the North American Junior Ski Jumping Championships. When I got out of the car in Lake Placid and looked at the very imposing 30-meter tower i got weak in the knees. And when i saw 20-30 kids from Lake Placid dressed in their red Lake Placid Ski Club sweaters, and 20-30 kids from Brattleboro in blue BOC sweaters and another 20-30 kids from other Eastern ski jumping clubs – all wearing their team colors, I was intimidated. Everyone looked so “professional” and self-assured in their respective team sweaters. I felt like an outsider and like I didn’t belong, but Dad was very supportive and encouraging – as always – and it turned out to be a positive weekend. It was also a positive experience for Dad and because he was a dreamer it got him thinking, “what if”.  When we got back home, he called Leo Turcotte, a local Buffalo contractor and former ski jumper from Berlin, NH and discussed the idea of starting a ski jumping club modeled after what he saw in Lake Placid. Leo was, and still is, a high-energy fast-talking Frenchman. He’s always itching to move and lives life like today might be his last day.  “I don’t buy green bananas or novels…and I only read short stories.” That summer Leo hosted a pool party for the junior jumpers and their parents. Leo was a great host and everyone had a great time. I learned later that one of the reason the parents enjoyed themselves so much was because Leo served large quantities of whiskey sours and manhattans.  But the cocktails were part of the plan.  Get the parents a little looped and the stage was set for Dad to present the vision of a Glenwood Acres junior ski jumping club, and hopefully the parents would volunteer to help out in addition to pulling out their wallets.  Everyone loved the idea.  Officers were elected, Leo was named head coach and tasks were assigned to the parents. It didn’t matter that Leo was the only one with any ski jumping experience; every parent agreed to take on a role or provide a function for the club. That fall Dad supervised a fund raising campaign and each kid went door-to-door selling light bulbs. Dad knew that in order for the sales to be successful the kids and the parents needed to be motivated so a cool prize was to be given to the junior jumper who sold the most light bulbs. The carrot for the parents was the winner would be announced at a party hosted by Leo and it was understood that whisky sours and manhattans would be served.   Over the fall the program began to take shape. Practices times were set, dates decided for home tournaments and road trips were planned. Newspaper articles appeared in the Buffalo Evening News about an exciting and unique opportunity for kids to learn how to ski jump. A logo was designed and evergreen colored custom-made team sweaters, hats and parkas were ordered for each kid. It was like Christmas when we got our hats, sweaters and parkas. I was so excited I think I found an excuse to wear my sweater to school one day. I could hardly wait for the first road trip that winter which was to Brattleboro for the annual Helen Harris Junior Jumper Christmas training camp – a camp we would attend many times over the years. My memory of arriving at the Latchis ski jump is just as vivid as my memory of when I arrived in Lake Placid.  But it was very different.  In Brattleboro I remember stepping out of the car and feeling very confident and self-assured. And as I walked around the hill I overheard people saying, “who are those guys in the green sweaters and where is Glenwood Acres?” It didn’t matter to me that no one knew who we were or where we were from. What mattered was we were recognized as a team and I belonged to something very cool – the Glenwood Acres Jumping Team. Glenwood Acres was a very unlikely location for a ski jumping program. There was no tradition and we were 7.5-hours drive to the closest Eastern Amateur Ski Association event, but due to the vision, ambition and determination of a couple of men, we had a very active and engaged program.  I have much to be thankful for in my life and I’m the person I am today, in large part, because of the opportunity I had to participate in the sport of ski jumping.  I’ve learned along the way, from the people I’ve met and the experiences I’ve had, that its ok to dream big, and that if you want something, don’t wait for it to come to you…go after it….“today!”. And always to pursue your dreams with passion and perseverance.  But I do have one regret, and that is that I took the program that I had the privilege to participate in for granted and I don’t think I ever properly thanked the President and Head Coach of the Glenwood Acres Jumping Team for all that they did. So let this story be an acknowledgement and a tribute to Ken Bell and Leo Turcotte for their hard work, their steady guidance and the life changing experiences they provided to me and the other junior jumpers from Glenwood Acres.