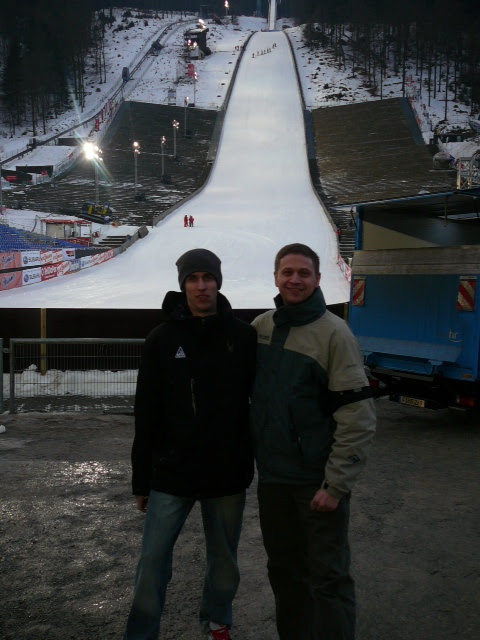 CARPE DIEM-  USASJ athlete (and reigning normal hill national champion) Nick Alexander at his first World Cup in Willingen, GER with father, Jim.JIM ALEXANDERLebanon Outing ClubLebanon, NH  M.James.Alexander@hitchcock.org On a cold December day in 2008 I answered my cell phone to hear my son Nick on the other end of the line calling from his ski jumping trip in Europe, “Hey Dad I’m going to be in my first World Cup in Willingen Germany in a couple weeks – you should come.”What, was he nuts? Drop everything and go to Germany – in two weeks? I had only traveled to Europe once in my life twenty years earlier, and frankly as parents our job was to stay home and make the money to keep the athletes jumping.  My wife Deb was a teacher with very little flexible time off and couldn’t go.  As well, Nick raised funds from people in the area to be able to continue his jumping dreams. How could I go and waste the money? A good friend from our community, former ski jumper and fundraiser for Nick, Bill Cilbrith, told me that ski jumping wasn’t just for the jumper and that I needed to go. He told me I would regret not jumping at a chance to be with my son at this time in his life. My wife encouraged me to go and be part of this experience with Nick.  Still, I just couldn’t justify what seemed like a lavish adventure. The next morning Nick called again, “Hey Dad, I found a flight for you from Manchester, NH to Frankfurt Germany for $427.00…round trip” He also reminded me I was accumulating travel reward points on my credit card; the flight was inexpensive but I never expected one that cheap – He had me…..he had me at a lousy four hundred bucks!  Credit card reward points…. Where do I sign? In two weeks I was with my adult son bombing down the road after he found me roadside in Marburg, Germany where we continued together the drive up to the hills of Willingen for a great 3 night trip and his first World Cup.  The trip was filled with many adventure’s; such as our coach arriving late, necessitating that I represented the US coaching staff in the official FIS coach’s welcome and organizational meeting (talk about intimidating…) The trip was a blast and a time I will never forget the time with Nick.