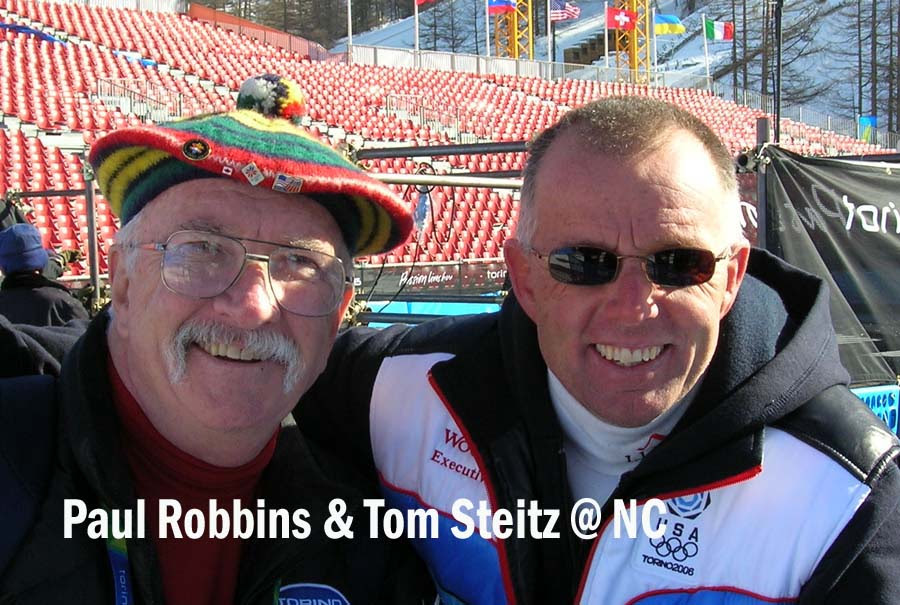 Paul Robbins in his trademark tam shown in Torino in 2006 with former Nordic combined coach, Tom Steitz.PAUL ROBBINSDeceasedReading, VTprobbins@heaven.edu Paul Robbins was a journalist for the US Ski Team from 1980 until his death in 2008.  He was elected to the US Ski Hall of Fame in class of 2009.  The following are excerpts from his memorial service. Paul had an intellect and wit that were legend and dispensed- like everything he dispensed- without regard for audience or outcome.  He was Elements of Style, Websters, Thesaurus, and Ecyclopedia Britannica wrapped in one.  He was Google before Al Gore had invented the internet.

Paul was the Yogi Berra who- when accused of being old- quipped- it ain’t the years, honey, it’s the miles that matter.

Paul was a guy who filled the room without sucking the air out of it; who brightened a room without casting shadows.

Paul was the one journalist who not only knew what a telemark was, but also that yours was left foot forward.

For Paul it was never about taking, but always about giving- about sharing.  About providing the texture and context that took obscure athletes doing obscure things in obscure places and making their stories meaningful to a public who hadn’t supposed they ought to care.  He brought the heart of the athletes he covered into the heads of those who read his prose.

And those of us who knew him still appreciate his efforts and miss him mightily.