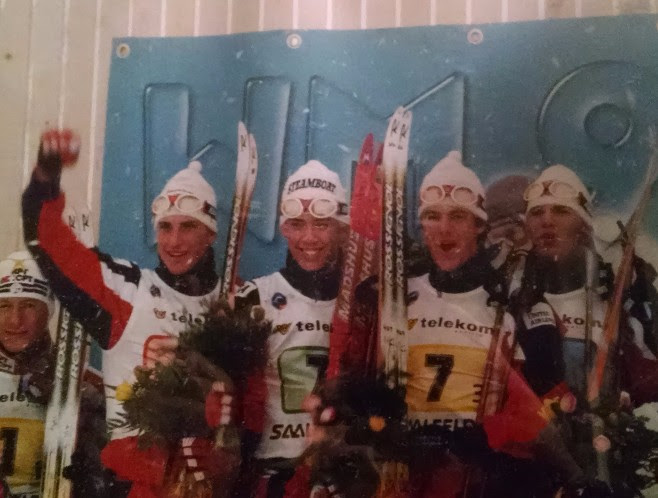 THE BEGINNING OF SOMETHING BIG- Van Loan, Spillane, Jed Hinkley and Billy Demong on the podium after winning gold in the team event at the 1999 World Junior ChampionshipsCARL VAN LOAN & JOHNNY SPILLANEAndover Outing Club & Steamboat Springs Winter Sport Clubdcvanloan@aol.com & info@steamboatflyfisher.comAn Historic Feat for Four Friends The spring of 1998 represented a changing of the guard in United States Nordic Combined.  Dave Jarrett had retired, Tim Tetrault entered the last season of his career, and the National Team all of the sudden included four new members under the age of 20. The 90’s had seen huge leaps forward for the US behind the success of individuals like Ryan Heckman, Todd Lodwick, and those before them. These successes had paved the way for a promising 19-year-old named Billy Demong to burst onto the scene in Nagano. In the US, spirits were high, but Johnny Spillane, Carl Van Loan, and Jed Hinkley were not yet a blip on the radar of traditional powerhouses like Norway or Germany.  However, these countries did not know that this new guard included four friends, best friends, who had grown up training together.  And those four friends had set one collective goal that spring: to win a gold medal in the team event at the 1999 Junior World Championships.             The audacity of this goal had its foundations in the belief that the US Nordic Combined Team was going to be the fastest junior team in the world, bar none, and one of the main reasons for this was that the changing of the guard had also included coach Bard Elden. Bard had been hired to coach these up and coming juniors, and he was, and still is, without a doubt the most dominant cross country skier who had ever competed on the Nordic combined world cup.  With this unparalleled knowledge and experience, Bill, Johnny, Carl, and Jed steadily improved throughout the summer and fall, and were skiing as fast as they ever had as the season approached.              When Junior World Championships finally began, the team was looking for redemption from a near last place result in the team event the previous year.  Would it be possible to rise from the bottom of the pack to be the best junior team in the world?  The individual event did little to suggest that it could be accomplished with mediocre performances at best, but with a renewed focus and determination, the boys leaned on each other and continued to believe.              The day of the team event arrived, and they jumped to a solid 7th place, well within striking distance of the leaders at under 1:30 back.  Their confidence continued to grow and the excitement was palpable as they headed to the cross country venue. The wax was perfect, the athlete order strategically selected, and as Carl Van Loan led off the first leg, he began to hunt the other teams down and eat into the lead.  After posting the fastest time of all skiers that day and pulling back much of what was lost in the jumping, Carl tagged Johnny, who moved the US a couple more places up and continued to chip into the advantage.  Before anyone knew it, Johnny had put them in a podium position, but that was not their goal. Their goal was a gold medal, and after Jed’s third leg, they were a measly 17 seconds down, and in second place.  Billy was skiing the final leg, and amazingly he was able to chase down Andy Hartman, who was ranked in the top 15 in the world, before the last hill.  As Bill came around the second to last turn and into site of the stadium, he was in the lead, but Andy was right on his heels.  Would he be able to hold him off?  They both sank out of sight over the last rise before circling back into the stadium.  Everyone watching held their breath as they waited for them to reappear.  Who would be leading, and could Bill hold Andy off in a sprint?  Then, as though in slow motion, Bill appeared in first place, surging toward the finish line, and Andy was at least 5-10 seconds behind him.  As Bill crossed the line, the team mobbed him, and the celebration began!        They had done it! They had posted the fastest team time of the day and in doing so had won the first team medal in any World Championship event in US Nordic skiing history!  It was the result of hard work, friendship, and a belief that it was possible.  It was also the result of great coaches, a fantastic staff, and the never-ending love and support of parents, family, and friends. This was exemplified by the fact that all of their parents had traveled the long distance to witness this event, and celebrate the great accomplishment.  That day America took another step forward in what would culminate in the medals won by Bill and Johnny at the Vancouver Olympics in 2010, and it is a piece of the story that is US Nordic combined skiing.  The story continues today, and there are many more great accomplishments and milestones to come. 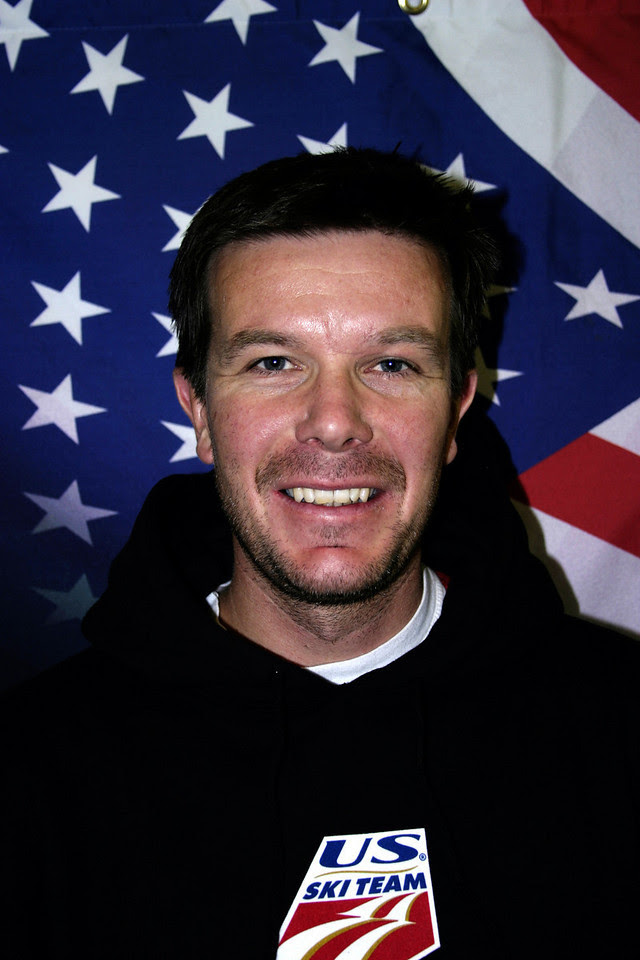 ONE OF THE KEYS TO VICTORY was the experience and knowledge that came with Bard Elden, of Norway, shown above in a 2005 USST head-shot..