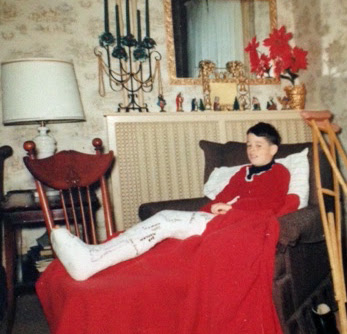 THE BEGINNING OF A LONG SEASON.  Tom at home recuperating after skiing down the planks of the Lake Placid 30m trestle.TOM ODDYLake Placid Ski ClubNow Lebanon Outing Club & Andover Outing ClubTOddy@gmcsusa.com .There Was “No Agony of Defeat” for Me-December 15, 1965 Growing up ski jumping with the Lake Placid Junior Ski Jumpers, I was fortunate to have access to excellent lighted 15 meter and 30 meter ski jumps right in the center of the village as well as the 40 meter and 70 meter at the Olympic Ski Jumping Complex. On any given training night there would be 40-50 junior jumpers being encouraged and coached by two of my favorite and positive coaches John Viscome and Paul “Bud” Colby; Mr. Viscome & Mr. Colby to me at the time. After my parents, these two men were most responsible for opening many doors of opportunity  &  teaching life lessons that impacted the rest of my life including lifelong friendships with fellow ski jumpers, college, employment, sportsmanship and the drive to fight through times when you thought you might have to taste the agony of defeat! On December 15, 1965 when I was 13 years old, on a cold, icy, windy night, we were training on the 30 meter jump behind the Lake Placid High School and Olympic Arena. There was not much snow on the trestle/tower and the in-run was glare ice, with no track and only about a half meter wide. I had several jumps in these tough conditions that night and on my last jump of that season I kicked out of the start and all of a sudden skied out of the track and was skiing on boards trying to get back into the narrow icy in run. Unfortunately, I did not make it and fell opposite the take off and caught my ski tips on a stair hand rail post and broke my left tibia and fibula, topped off with a concussion.  I will always remember Mr. Viscome telling me in the emergency room that in effect I gave it a good try that night and even though my jumping was over for that year I could travel with the team to places like Brattleboro, Salisbury, Bear Mt., and Beacon, NY. Many of you will remember Lake Placid would travel with 40 plus jumpers in school buses, all uniformed in our red sweaters, red coats and hats.  The encouragement I received gave me the drive to stay with ski jumping;  jumping in college for the University of Vermont and after graduation I coached at St. Lawrence University and in 1977 went back to my roots and coached with the Lake Placid Junior Jumpers and was employed by the Lake Placid Olympic Organizing Committee. Currently I am staying involved with ski jumping, volunteering with New England Ski Jumping Nordic Combined (NESJNC). That night in Lake Placid could have been a night of defeat whereby I may have quit, but because of great parents, positive & encouraging coaches and ski jumping friends I stayed with the sport that I enjoy & owe so much! To this day I use my ski jumping experiences to help me defeat potential agony! 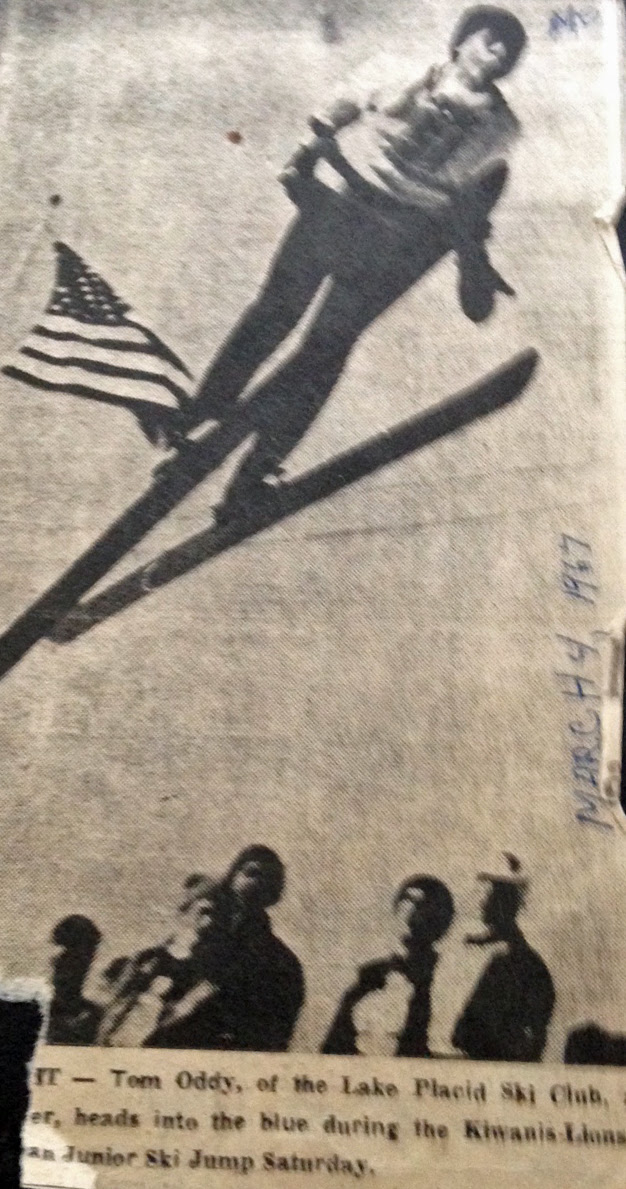 FULLY RECOVERED.  Tom the next year on the same hill.  Defeat was not an option.