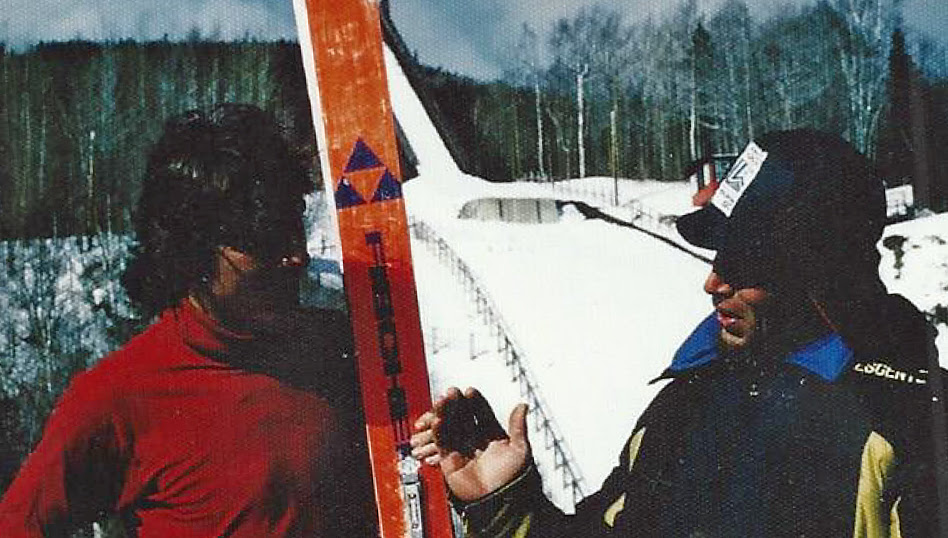 ONE OF THE GREAT COACHES THAT PAT THANKS: Alan Johnson (R) with Pat in Laconia, NH around 1980.

It must have been January of 1980 by the way Alan Johnson was outfitted in this picture. The Olympic tryouts were over and those of us who were not preparing for the games were touring the New England jumping circuit, Jon Zdechlik and myself included. Steve Gaskill was in Lake Placid and lucky for us Alan Johnson was available to give us guidance from the take off and to points beyond. Coaching is an odd position, so often thankless. If the skier does poorly, the skier is in a bad mood and the coach deals with it, on the flip side if the skier wins everybody is happy. Raking, shoveling, schlepping, did I say schlepping, god bless the coaches, encouraging and sometimes even disciplining.  I am not sure if some of the coaches knew what they were getting into. You become a family like it or not.

Some 30 years after competing I look back with reverence to all of the coaches and volunteers who donated so much of their time to us kids on the hill or us racing through the woods. Normally it was freezing cold and as I remember footwear in the sixties and seventies was crap. From the 10 meter in Frisco, Colorado where I took my first jumps to all of the wonderful ski jumps in the US. It is the volunteers and the coaches who are the true backbone of US skiing. We were and are very lucky for all of the coaches. If I may thank a few of the many great coaches from Dick Wellington and Bob Zdechlik, Gary Giberson and Dave Quinn to Steve Gaskill, Alan Johnson, Joe Lamb, Doug Peterson, Mike Devecka and Jeff Hastings. These are the ones whom I spent a lot of time with, and there are countless others who gave encouraging words from the sidelines. It was a true gift to have had the opportunity to meet and then work with so many great people, the same people who helped us set goals that never could been attained without their help and encouragement. I am not the first one to say this but, here’s to the coaches. Hear, hear!

With that being said, I have a short but memorable story.  January 1976, I think we were sophomores in high school we had just finished a jump comp at the Winter Park jump. So many great coaches at that complex, and a 5 meter, 15, 35 and a 50 meter jump.  What a great place to compete. We are done jumping and we have a cross country race in one and a half hours, about 30 minutes away at Devil’s Thumb Nordic Center. Summit High School’s head Coach Gary Giberson made it very clear that the bus was leaving the parking lot at 12 o’clock on the dot. Jon Zdechlik and I were, well, screwing around, not sure what we were up to but it sure took our interest. As we were heading to get on our bus we noticed that there weren’t any busses in the parking lot. We looked at the huge clock on the ski lodge and it said 12:15. The sh#*& just hit the fan. Getting out of Winter Park is no easy feat, we tried hitch-hiking for 5 minutes which felt like 5 hours. Then one of us came up with a great idea of running down the rail road tracks to save time to go straight to the town of Winter Park. So, we took off down the tracks. Railroad ties are perfectly spaced for trains, not running. One tie was too close and every two ties was too much. In hindsight this was a mistake. Zeke made it look easy, I followed. Finally we hit a road and were making our way to Winter Park when someone saw two kids way out of the way and pulled over. We fially made it to the cross country race and when we saw Giber we knew we were in trouble. We got our skis and raced, Zeke in classic style won the damn race. I was toasted when I got to the race and finished in the back of the pack. So, every year after, when Giber was laying out the rules for the new kids on the block he would ask us if he want to tell the story or if we wanted to tell the story about not being late. Because nobody was going to make the whole team late. We told the story.  And we were never late again.

God love him. I wish he’d stayed longer but the time we had we have to cherish. 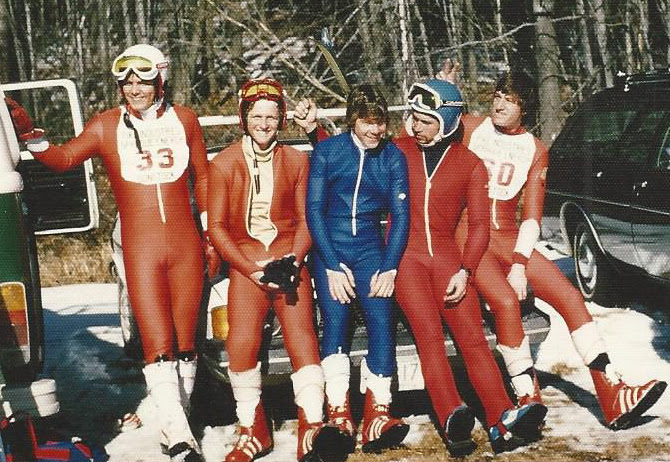 THE GANG’S ALL HERE- Glenn Joyce, Dennis McGrane, Mike Randall, Pat Ahern, Jon Zdechlik maybe in Laconia, NH in 1980.
###
CURATOR’S NOTES-   For a quick look at how much Pat did as a Nordic combined skier , click here. For his FIS bio page – click here.

Regarding Jon-  I try to keep myself on the sidelines but Zeke (as he was known) was a such a kind, mischievous and generous soul that I had to go digging through some old photos.  It was 1980 and my first trip to Europe. Jon, Pat Ahern, Dennis McGrane and I (along with Dan Mattoon, Reed Zuehlke and coach Rex Bell among others) skied our way north through Finland that March winding up, sun-starved, on the Arctic Circle in Rovaneimi.  Someone looked at a map and determined that if we jumped off our flight home when it connected in Zurich we could take trains all the way to Sicily… the farthest point south for the shortest money.  We borrowed the bedding from our last hotel and set out.  In many ways it was similar to Pat and Jon’s adventure getting from Winter Park to Devil’s Thumb… only no one picked us up.  A classic Zeke adventure. 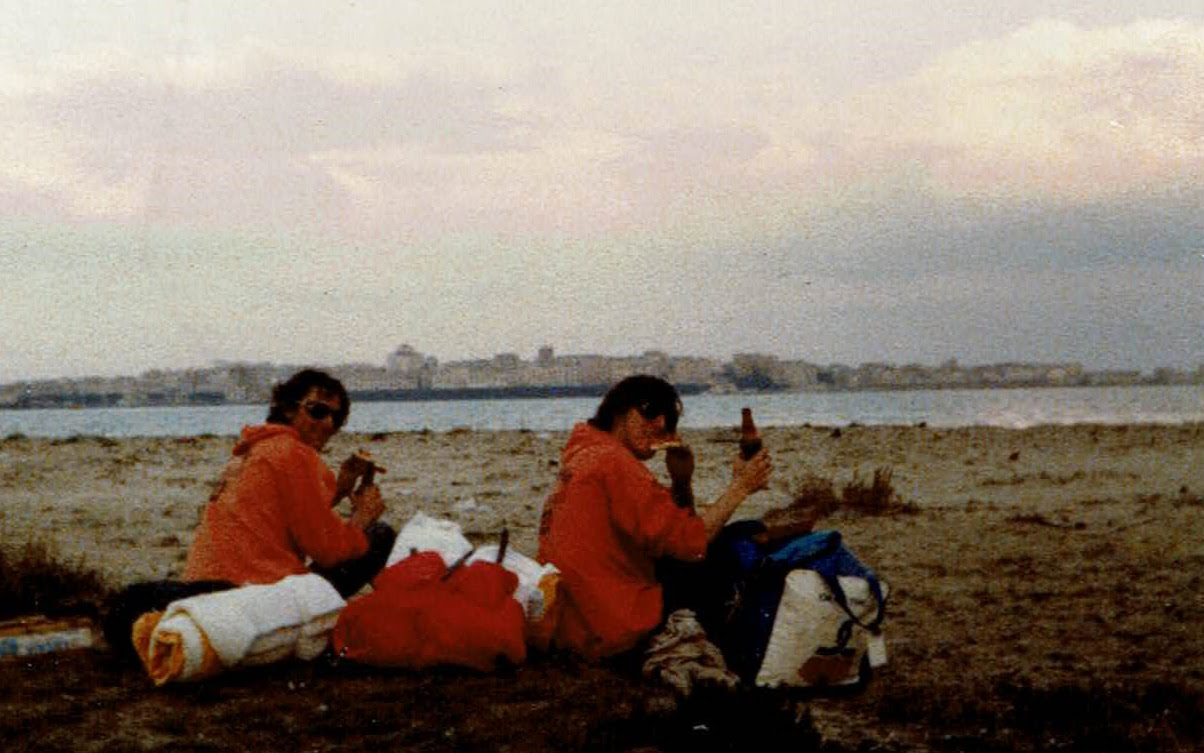 WELCOME to SICILY.  Zeke (R) and Jeff Hastings (L) celebrate their arrival with pizza and beer.  Note the handsome bedrolls and matching orange jackets, courtesy of the distance markers in Rovaneimi.  The photo doesn’t capture the garbage on the beach, the proximity to the bad elements of the city center, or the deluge that was coming in the clouds banking in the distance. 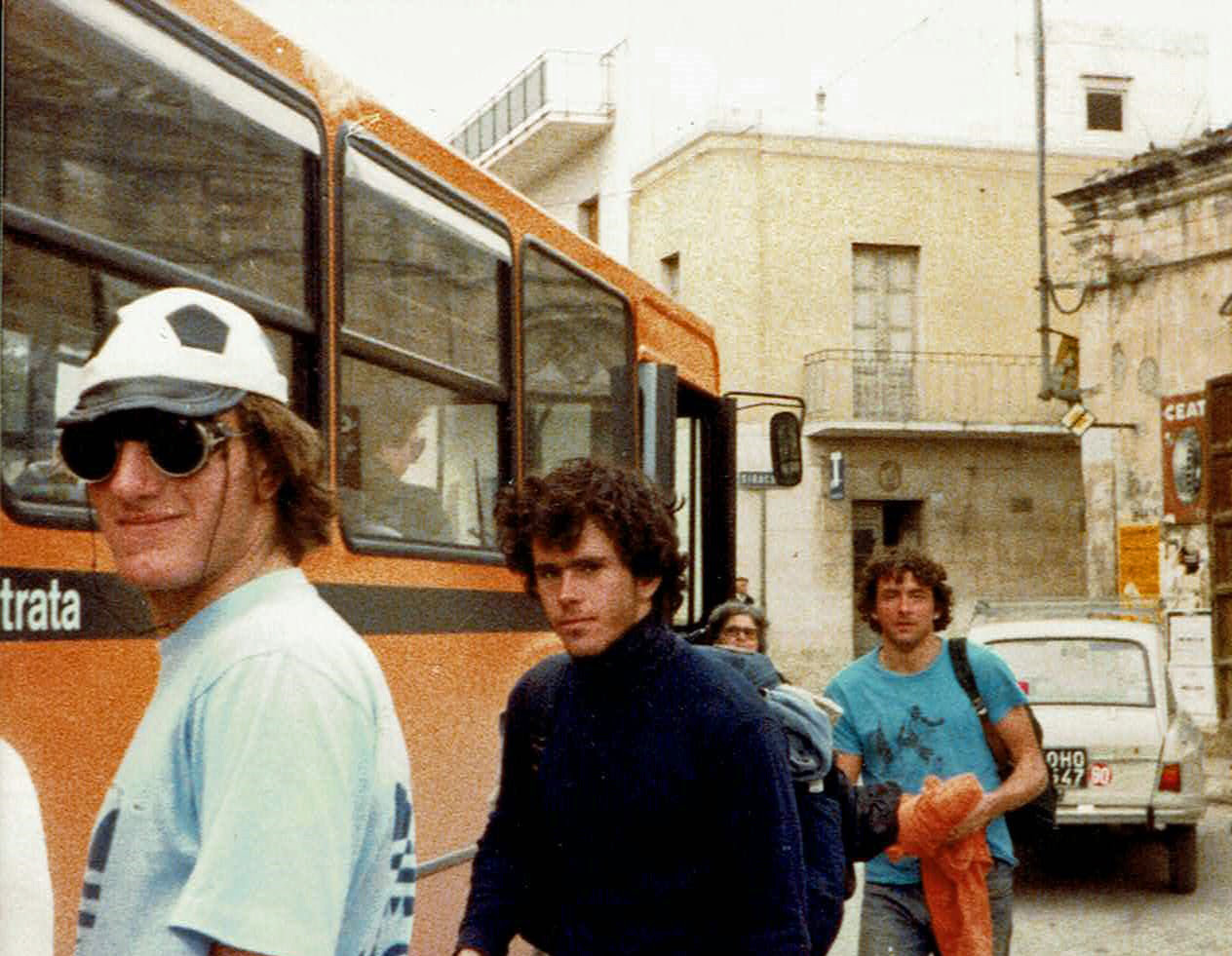 TRAVELING (& DRESSING) LIKE ROCK STARS.  Zeke, Pat Ahern, and Jeff Hastings getting off a bus somewhere between Zurich and Sicily. 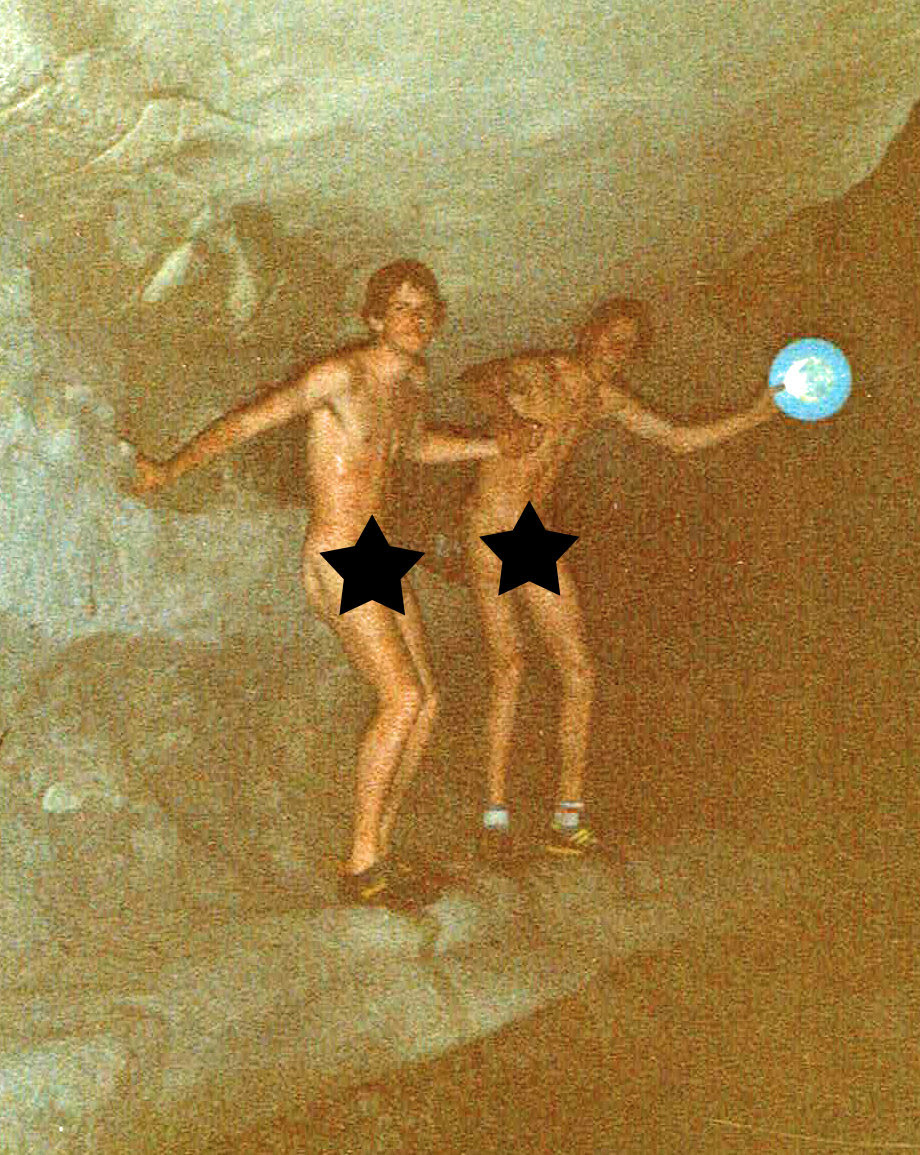 WEARING ONLY SNEAKERS & SMILES.  Retrieving the frisbee from the cold and haunted waters of the Mediterranean.  Dennis McGrane (L) and Zeke (R).