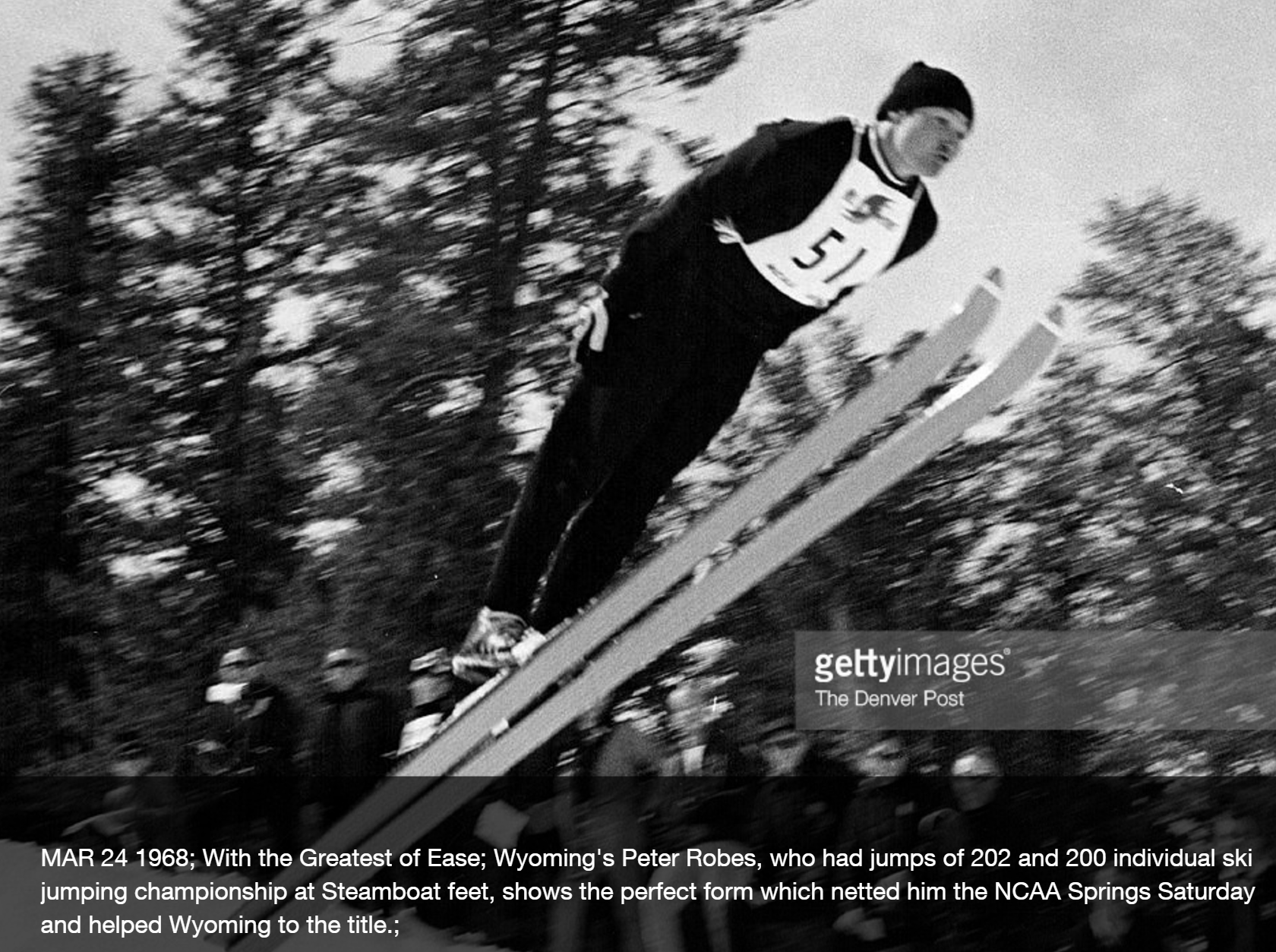 STYLING!  Peter Robes looking good in the 1968 NCAA Championships.PETER ROBESEtna, NH/Franklin, NCUniversity of Wyomingpeter@wildlife.properties My father Bill Robes loved the sport of ski jumping and enjoyed coaching his young aspiring flyers. For many years he coached youngsters at the Roger Burt ski jump complex in Hanover, NH which was named after his best friend who unfortunately passed away at a very young age. Roger was an FIS judge and a great advocate for the sport. No matter how cold the outdoor temperature as long as it was possible to jump you could always find Bill at the complex at least two nights a week during the season. It didn’t matter to him if his young skiers were bouncing off the knoll or flying to the bottom he gave each of them his undivided attention and encouragement.  At the time I was attending the UofWyo I would usually try to call dad on Sunday nights to check in. The conversation usually ended with us talking about his young jumpers. He would always update me on the progress of all of them. He would go through the entire list and describe to me how each one was doing and the progress they were making. Of course some were doing well and improving with each night’s practice while others were having difficulty.I remember dad being very excited about one particular kid that he felt really had a great deal of potential. Each time I called he would tell me how good this youngster was doing. I think it was 1969 after the competition in Brattleboro I decided to head home for a few days rather than to fly back to school. Berlin was the next weekend and was just a short drive from Etna. Dad was very excited to have me home so he could show me how well his young jumpers were doing and especially this one kid. We arrived at the jumps around 6:30 on a weekday night and prepared the two small hills for the soon to arrive onslaught of youngsters. They started showing up walking out of the shadows of the path that led from the parking lot to the jumps, the kids ranged in age from 6 – 17. Some had the latest equipment and some with not so good equipment, but all seemed to be happy to be there to spend the next two hours with Mr. Robes. Some of the kids were anxious to climb the scaffold and take their first jumps while others had to be talked into it. Dad had a gift of persuasion he could talk almost any new young recruit into taking a jump. It was quite a site to see the incredible smiles and expressions on their little faces when they climbed back up the landing hill to get dad’s approval. Taking that first jump was all they needed to build their confidence. Of the roughly 20 kids practicing that night some did show potential.  The one kid that dad felt had great potential was, shall I say, not a typical looking ski jumper of the time. He was quite tall for his age, but his skinny little legs and his thin physique did not match the body shape of what successful jumpers looked like back then. He was however, very serious and he listened to every word my dad spoke. He was all business and very determined.Driving home that night after the practice Dad asked me what I thought about his young skiers and in particular what I thought about the skinny little kid that was by far the best of the night. I remember telling dad something about him riding the in-run flat footed and jumping off his heals. He didn’t have any forward motion at take-off causing his hips to be directly over his feet at entry. His upper body was bent over too much and his flight position was too upright. I went on to tell dad that the kid probably would never make it in the sport given that he had the comfort of not committing at take-off and he had been jumping this way for some time. I felt it would be very difficult for the youngster to make the change necessary to continue to be successful in the sport. Dad sounded a little disappointed in my comments, but he never gave up on the kid that I so wrongly analyzed that cold winter night many years ago.That kid was Jeff Hastings, as Paul Harvey would say “now you know the rest of the story”.For fear of leaving someone out I have chosen not to list the names of the ski jumpers that dad coached at some point in their careers, but the following is a list of some of his former ski jumper’s accomplishments.5 national championships3 nordic combined national championships2 world cup victories4th 1984 Olympics1 world ski flying record 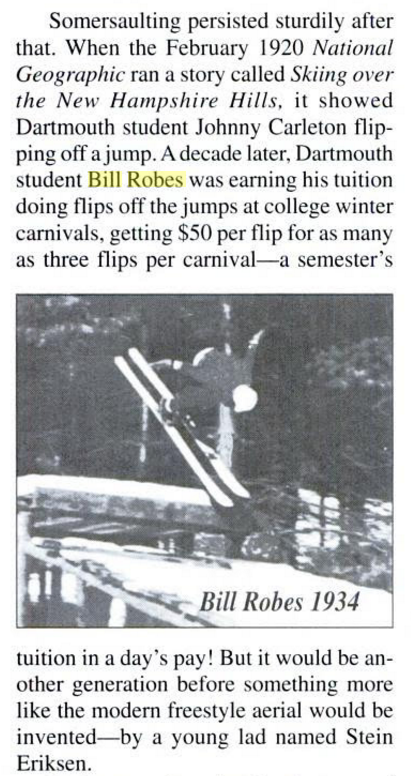 In addition to being a great coach in the Hanover, NH area, Bill Robes had a remarkable ski jumping history of his own.  The above is from Skiing Heritage Journal, March 1998.  Bill was named to the US Ski Hall of Fame in 1987.  See more by clicking here.