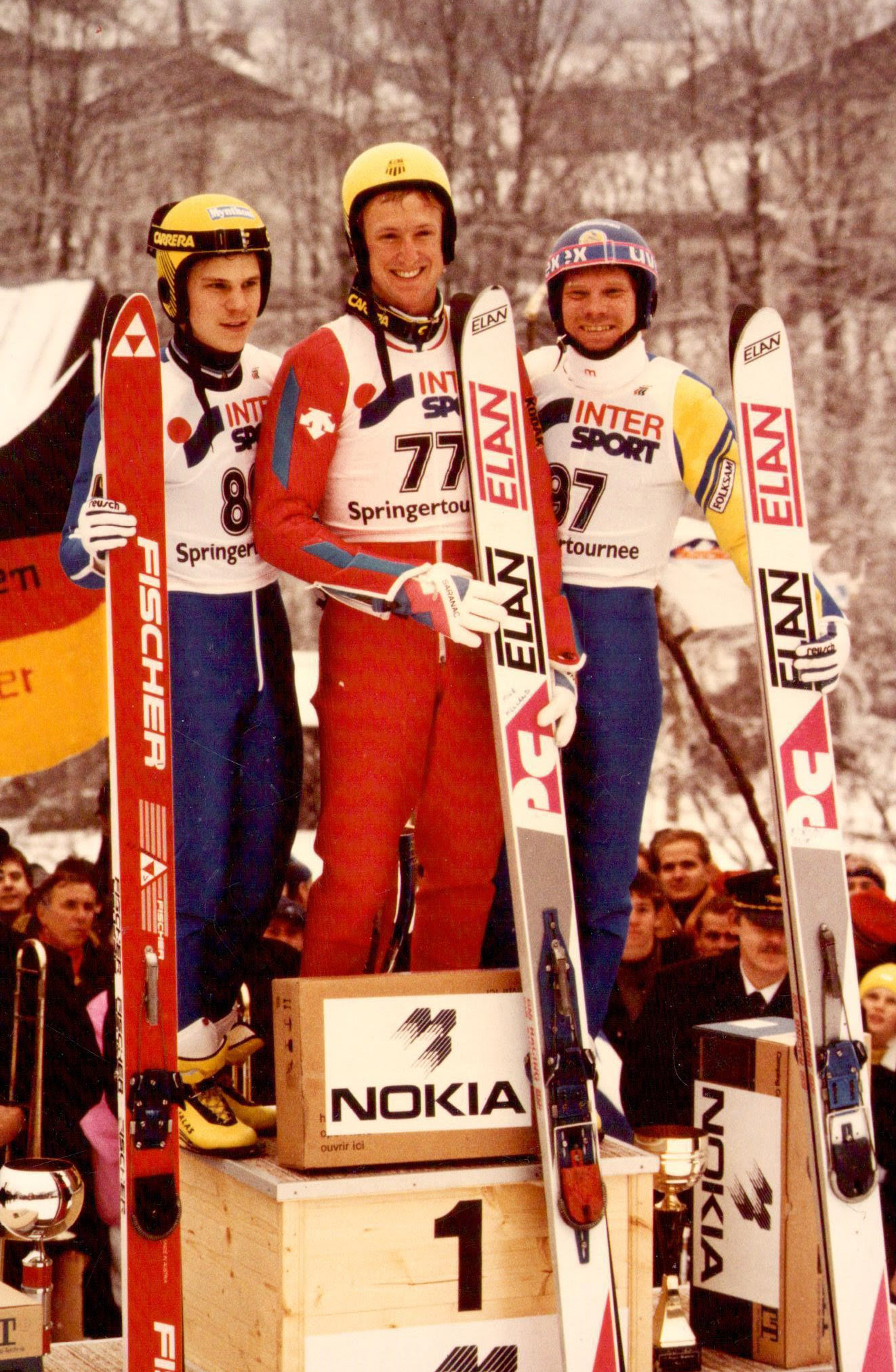 A DAY THAT WILL LIVE IN INFAMY- Bischofshofen 1989,- not only because an American won on European turf, but because in marked the beginning of the end of the “classic” style.   Ari-Pekka Nikkola (2nd, classical), Mike Holland (winner, classical), Jan Bokløv (3rd, v style).  Bokløv jumped 1.5m farther but finished 3.5 points behind because of style deductionsMIKE HOLLANDFord Sayre Ski ClubNorwich, VTmike@lendingcapital.comFather of the V-StyleJan Bokløv dropped in an epileptic seizure on top of Marikollen Norway’s HS95. Several minutes later, he recovered, shook off the brief interruption, and had the longest summer training jump of the day.  While competing in Norway this particular July, I was shocked to learn of Bokløv’s epilepsy and the enormous risk he experienced while ski jumping (and sky flying!) with unreliable medication.  Jan always approached duck footed, perhaps the reason for his V-style. Stuttering with a cigarette in his mouth, “Huh-hi” he’d announce with a wide smile.  Such were some of my impressions of Jan, the impressions of some others follow: Erling Rimeslatten, former US Team Coach writes, “I vividly remember one interview on TV with him.  You probably remember that he seldom got more than 16’s for style. The reporter asked him what he thought about those low style points. Answer:  ‘I am jumping. Judges are judging’. And nothing more was said in that interview. Jan was a good guy. Kind and always friendly. V-style father!!”Rex Bell, former US Team Coach writes, “First, I remember sitting with Erling watching videos of his takeoff in Hinterzarten one summer (when he was first beginning to have his success) and being totally confused how he jumped so far with an in-run position with little shin angle and the takeoff move wasn’t at all conventional.  I remember feeling embarrassed that i couldn’t see the reason he was jumping so well. I asked Erling if he could point out to me what he was doing.  Erling replayed a takeoff of Bokløv’s 6 or 7 times while he dragged on a cigarette saying nothing. He was searching and searching for something to point out to me and finally it was clear to me he didn’t know what to say.   He turned to me and said, ‘…i have no &%$#ing idea why he goes so far….I just don’t get it….’  I was so relieved that i wasn’t the only one couldn’t figure Jan out.”“Another time I was talking with his coach over a beer one night (I can’t remember his name). It was a pretty relaxed conversation so i asked him (what probably many other ski jumping people has asked) what was the technical reason Jan jumped with his skis split apart.  He said, his feet naturally turn out when he stands and walks and its the most comfortable position for him in the air.  And he’s a little bit stubborn and doesn’t care if he gets poor style points. And he’s jumping pretty well so i just decided to let it be. I think he was being straight with me.”“The other thing i remember was in Planica one year.   It was about 3:00 in the morning and a couple of you guys couldn’t sleep because the next day was the first day of the World Ski Flying Championships.  As i recall Greg and i were up with you guys keeping you company and doing what we could to keep things light.   What stands out in my mind is i remember being surprised that at that hour of the morning, just how many skiers and coaches were up and Jan was one of them.  But the reason i remember Jan was because he was smoking one cigarette after another and pacing away.” Ernst Vettori, Austrian Ski Team. Shortly after winning a gold medal in the 1992 Olympics (with tears in his eyes) Ernst told me, “I owe this gold medal to Jan Bokløv.” Ernst felt grateful that he was able to refine Bokløv’s technique in time for the Normal Hill event in Albertville.Greg Windsperger, former US Team Coach writes, “I remember he was short, and he had a slight speech impediment.  He told us (Erling and me) that he started spreading his skis out to the side because he was short and that when he did it, it allowed him to see ‘where he was going better.’   But soon he found out that he was having these amazing long jumps every 1 in 10 times.  When he first came off the take-off (I think it was for the 1985 Worlds Championships in Seefeld, and spread his skis out to the side, most of us on the coaches’ stand (except his coach) said, “What the hell was that?”   But every once in a while that year, he had these amazing jumps. As a person, I remember him to be very nice, down to earth type, and funny.”While not the most focused on health and self-preservation, Jan Bokløv revolutionized ski jumping the way Dick Fosbury transformed the sport of high jumping. We are eternally grateful for Jan’s contributions to the sport (all as one of the friendliest competitors on the World Cup Tour).  Thanks to Jan, ski jumpers fly a bit slower, are more stable in the air, follow a lower flight curve and land much softer.See what Jan Bokløv looks like today. 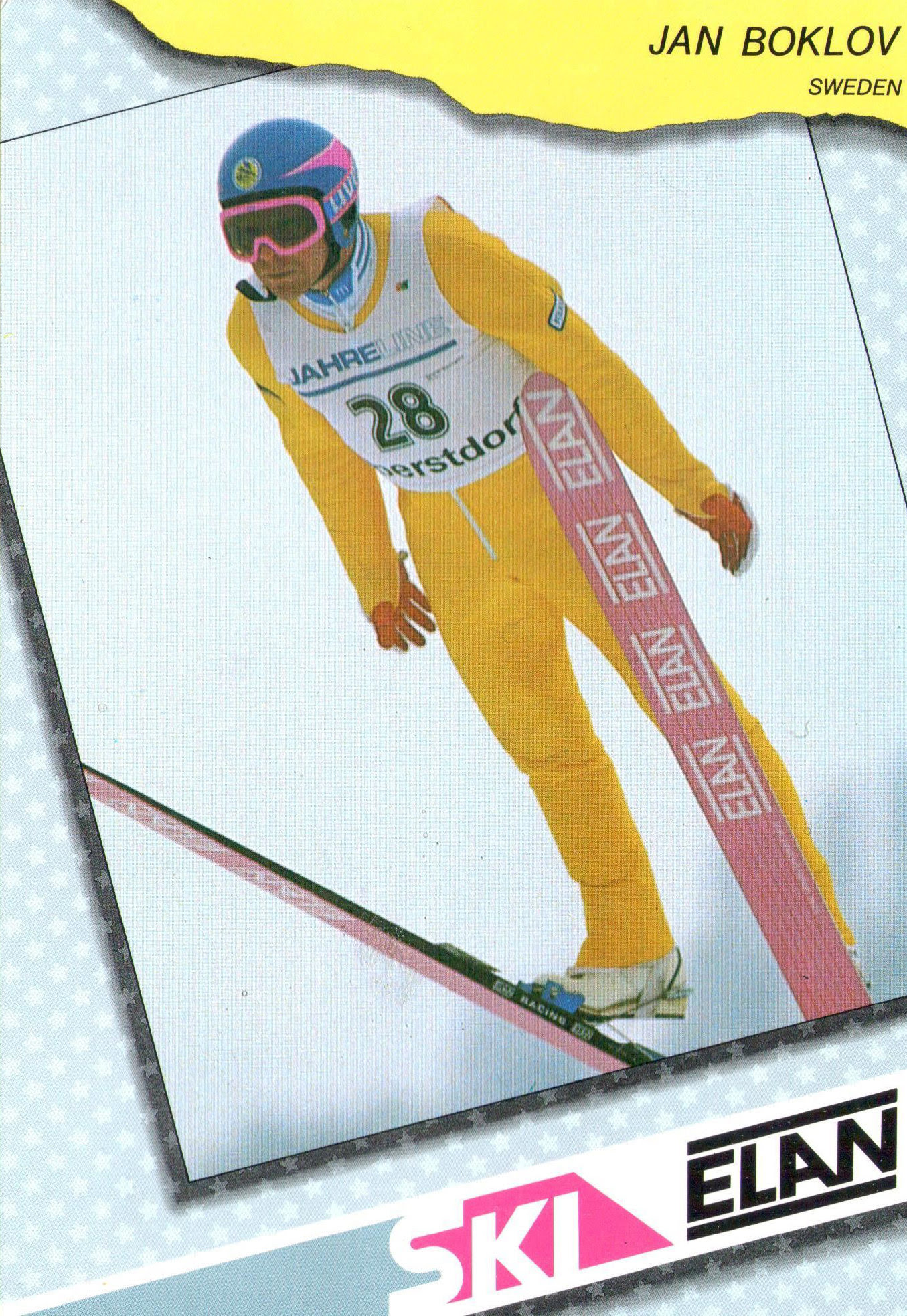