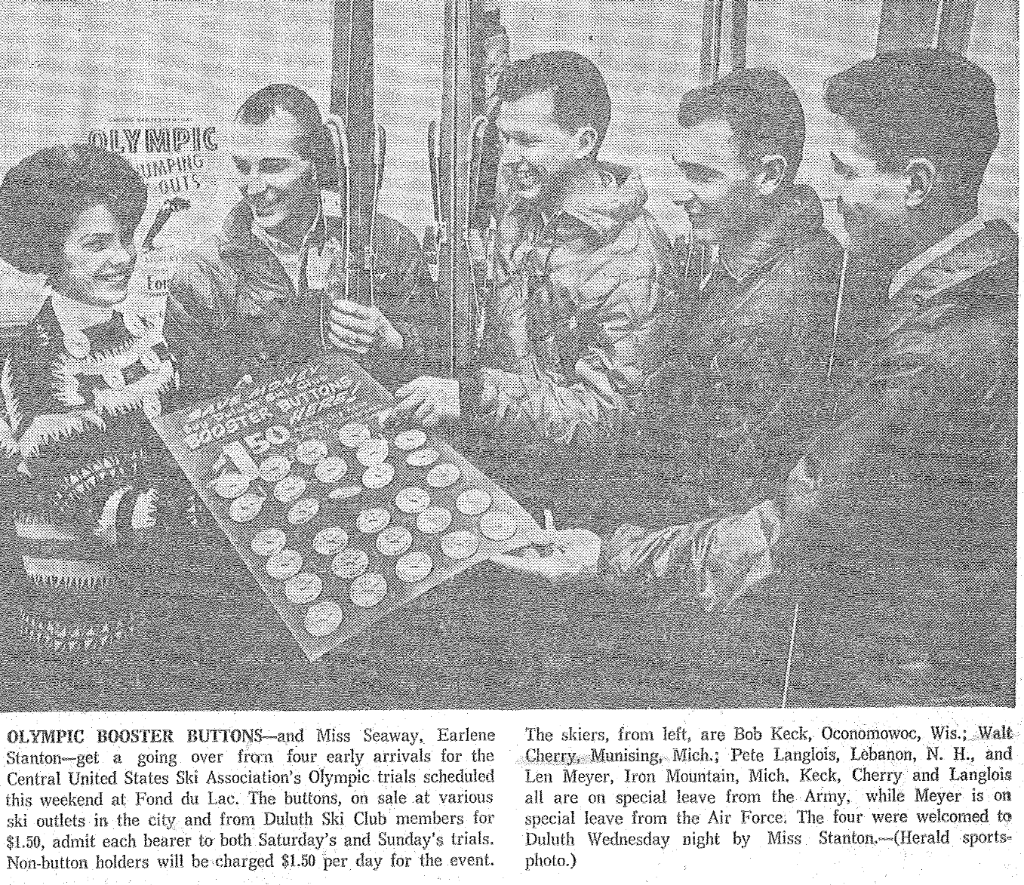 WALT CHERRYMunising, MI/St Paul Ski Clubwbcherry56@gmail.comSo, it’s early March, 1958. Iron Mountain is hosting the National Ski Jumping Championships. “Mighty Pine Mountain” where a year or so earlier I’d watched a meet where Esco Mommo of Finland demonstrated the latest in jumping evolution where the arms were held at the sides in what was called the “flying fish style”. On the same weekend I climbed to the top of the slide and tentatively decided I’d probably retire from jumping before I’d attempt a Hari Kari ride down this monster. But here I was, with my ski gear- under less than ideal circumstances: I’d never skied a 90m before though i’d skied the Ishpeming 70m the last two years: I started college- engineering at Mich Tech this year- skiing weekends only; class requirements didn’t allow me to travel to Iron Mountain until the morning of the tournament- so I got to the hill after the hill was closed for practice. And so, the die was set- my first jump on the monster was to be the 1st competitive ride in the National Championships, before a crowd of 15,000 people.Huh! . .. . . no pressure. . . no nerves!. . huh! . . . but, I did it. . competitive skills were set aside- this was survival- so, the cables were tightened a couple twists and the mindset was to not let the 60+mph speed and big air pressure flip me over backwards- and by damn I did it!! . .(Gene Kotlarek, Ken Lahner, Jon St Andre and Butch Wedin topped our Junior Class) Another adventure came five years later. I’d graduated college, was conscripted into the Army and along with three others (Bob Keck, Pete Langlois and Len Meyer) were touring competitions readying for the ’64 Olympic tryouts. I of the four, was the Nordic Combined representative. Prior to the Westby 90m meet I’d shuffled off to Crested Butte for a x-country/jumping NC meet (on a 40m jumping hill). With some “wouldn’t-you-know-it” scheduling, Lyle Swenson”s brother raced me from the airport to the Westby jump just as training was closed. Some fast talking and  some Coon Valley empathy allowed Walt, if he really, really hustled his bustle, to dash up the slide- on the QT- to sneak in one ride.  Tah dah!. . hustle, hustle. . civy clothes fly, slip into the suit ‘n boots, unwrap the skis and away we go. .up the steps..  no pressure of course. . a little sweat’ll loosen you up. . get to the top. . hmmmm. . which start?.. what-the-hell, it’s just a feeler jump- to the top!. . huff!!. . puff!!. . I’m good. . . got the flag- I’m off!! . .”oh my!! now this is some speed” . chest stayin’ down, press into it, and POP-IT!! . . INSTANTLY!!!!! it’s apparent we overlooked something. . . What you say? . . well I just came from a 40m hill. . . my cables were so loose I could almost slide ’em off and onto my heel with the front throws clamped ‘n down!  So, this 90 did a number to my skis- they came up and kissed my shoulders- w/ a combination of reflex and shock,I pushed into those tips and for a few milliseconds enjoyed the most exhilarating sensation- the feeling of hitting a soft snowbank and I was soaring upwards, complete w/ a little belly tickle. . . . .and then I panicked- too much!!  too strange!!- arms out!. . reverse thrusters(?) !! . wounded duck feel. . Holy crap I’m down this hill. . land skis. . land hands. . butt. . safe to the outrun. . cut ’em around. . just stand there amazed- what did I just do??   (I’m told I was 300’+) I’ve forgotten so many experiences as the years go by- and that’s a bunch ‘a years: I got my first competition card in 1952 in my hometown of Munising, MI- I competed every year, including 5 yrs in college, 2 yrs in the military and 30 yrs with the St Paul Ski Club- that should count to 41 years an active competitor. I jumped in the west: including Squaw Valley, Leavenworth, Steamboat, Winter Park. some of the Eastern hills including Lake Placid and Laconia, and most of the Midwest/Central Hills; skied two NCAA Nat’ls, attended two Winter Olympic Games and got to be an official  trial rider at the ’64 Innsbruck Games  I realized early that I wasn’t going to be a top-dog competitor but enjoyed working at it because I knew that while I was active and loved the sport, I could contribute much more than I’d take. (I continue to be interested in jumping’s evolution and news). 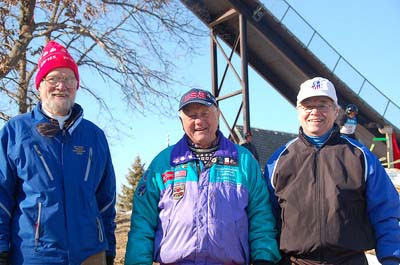