VIEW FROM THE CLUBHOUSE-  the Norge facility in Fox River Grove, IL.SCOTT SMITHNorge Ski ClubCary, ILsds63@sbcglobal.net Bill Demong, the new Executive Director for USA Nordic, asked me to share a story about how the Norge Ski Training Center started. The Norge Ski Training Center is the junior program associated with the Norge Ski Club. The Norge Ski Club was founded in 1905.  Like most clubs, Norge has always been a volunteer club. As we all know, things have changed over the years with volunteers. When I grew up jumping, I was fortunate enough to have great volunteer coaches both at Norge and throughout the Central Division. Over the years, I have seen numbers decline in many clubs, including Norge. In the late 90’s, I was coaching at Norge as a volunteer. We only had about 5 kids jumping. It was a Sunday afternoon in the fall and Bart Lockhart and myself were out with our handful of kids jumping on our old 20 meter. AJ Brown was one of them. At the end of the day, AJ’s Dad, Gene, walked by me and said, it looks like the kids are making some great improvement. I replied, just think if we had a full time program like Steamboat and Park City? He replied back, that would be great. So, everyone went home and Bart and I went into our clubhouse at Norge and sat down at the bar, of course we had a beer, and we started making some notes on a napkin on how we could start a full time program. Bart is originally from Steamboat so he spoke to some folks there about their program and I spoke to some folks in Park City. To make a long story short, we compared notes, and the Norge Ski Training Center was formed in the year 2000. The Norge Ski Training Center also became a 501c3 organization. Within a couple of years, we had approximately 40 kids in our program. Mike Glasder and AJ Brown were two of those kids the day Bart and I sat down with a napkin. Mike is now the veteran of our top U.S. Team and AJ continues to train and compete at a high level with hopes of progressing even further. Throughout the last 16 years, we have had many kids go through our program and progress to a National level. Joining Mike on the U.S. Team are Kevin Bickner and Casey Larson. All 3 are competing at a high level internationally. Norge also has Cara Larson on the Women’s U.S. Team. I would like to thank the families that have made this possible. The Lockhart’s, Glasder’s, Schauer’s, Furey’s, Fisk’s, Gilgenbach’s and Brown’s. There are many other people in our club that helped out as we moved forward. During this time, we also moved a K70 meter trestle from Ely, Minnesota to Norge (in 2004). We now have a K5, K10, K25, K45, and K70 meter. All have plastic for summer jumping. This group started the Norge Ski Training Center and it continues to be a great junior program. When we started this program, I was the only coach. We now have 3 parttime coaches. Long time ski jumpers and members of the Norge Ski Club, Scott Immens and John Glasder are the other 2 coaches. We currently have approximately 45 kids in our program. For a small club in the Midwest, we are proud of what we have accomplished.I feel more clubs could have a similar program like ours, even on a part time basis, to help this great sport grow. Thanks for everyone’s support.Editor’s Note- Scott Smith was an inveterate track setter (never said no) and has skied and coached at every level and has been recognized at many levels, most recently with the USANS’s coveted Ptarmigan Award in 2016. 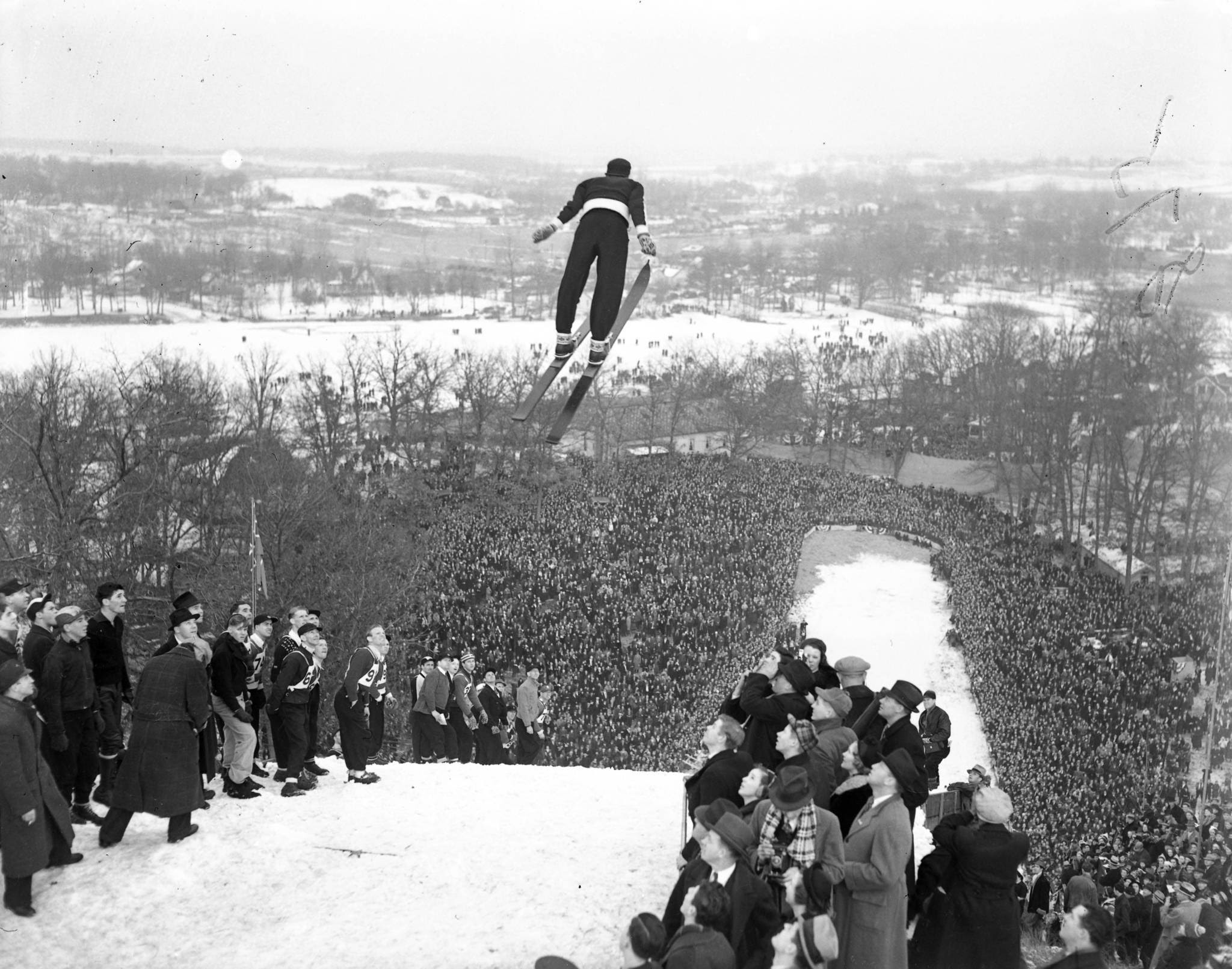 A STORIED HISTORY (photo and caption from Chicago Tribune)- Approximately 20,000 spectators showed up for the annual Norge Ski jump tournament in Fox River Grove, Ill., on Jan. 16, 1938 on the banks of the Fox River. Birger Ruud, of Norway, is shown here making one of his two jumps of 172 and 181 feet that won him the international title. Ruud was a two-time Olympic champion with Norway’s Olympic ski team.