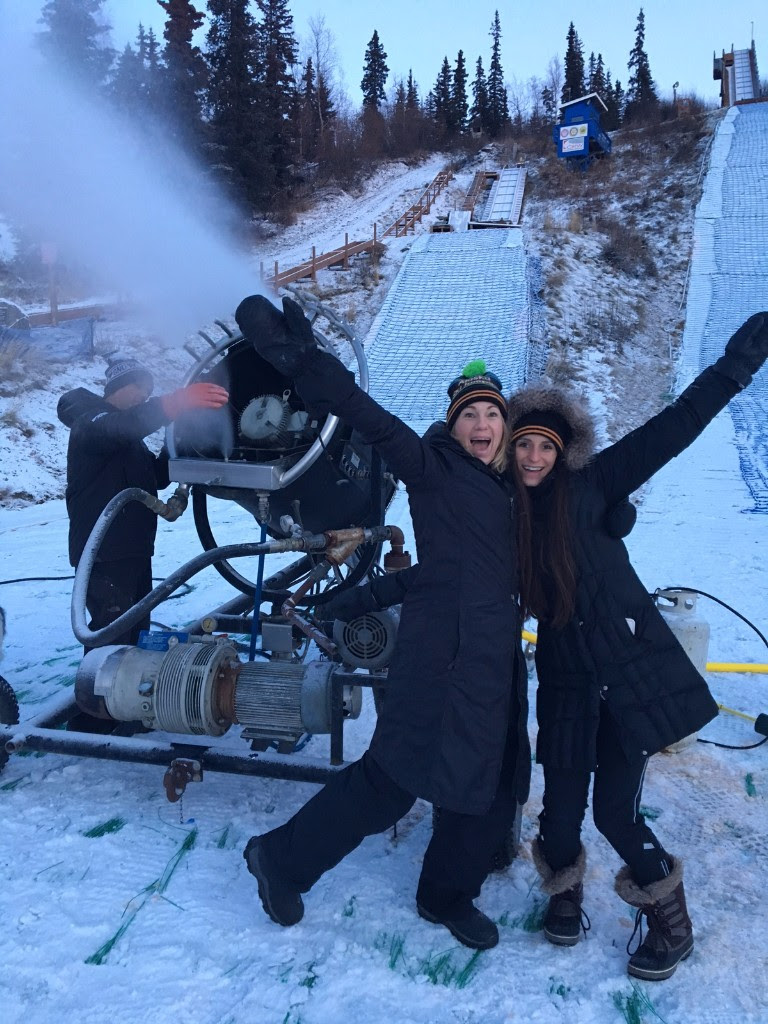 CELEBRATING THE ARRIVAL OF WINTER.  Actually Karen Compton (L) and Natasha Mattoon (R) are celebrating the arrival of a snow gun donated by the Eau Claire, WI Flying Eagles Ski Club.   After receiving no snow last year the gift was eagerly accepted but the challenge came in getting it from WI to AK for less than the cost of a new one.  Good planning and good luck collided as Karen outlines in her story. below.  Team AK volunteer Tom Smith checks the air/water mix in the background.

Pity the poor Alaskans. In a state synonymous with ice and snow, the 2015-16 jumping season was warm and dry. Our 2016 Junior National team hadn’t jumped their K40 or K65 AT ALL the entire season—there just wasn’t enough snow to open the hills. So they showed up in Salisbury, CT, hoping to get a few days of training in before the competition when THAT hill melted. In the end, the Alaskans took three jumps—one practice and two competition—all season.

Jeff Urlaub and Dan Mattoon from Eau Claire came to the rescue! Their club would sell us their old snow gun. We raised money to pay the alpine ski area next to our jumps to tap into their water system. Then we got a grant to upgrade our electric.  The final problem was–how do we get this snow gun 3,000 miles to Alaska? We could get free maritime shipping from Tacoma to Anchorage but it would cost $3,000 to truck it on a flat bed to Tacoma. Again, Eau Claire to the rescue. Jumping dad Matt Gundry pulled the snow gun to Grand Rapids, MN, on his way to Coleraine for ski jumping. There it waited for two months for a spot on a truck headed over the Alcan to Palmer, Alaska. By then the trucking company lost my name and number! As it happens, the snow cat driver for the ski area next door was driving by the trucking yard and saw the snow gun sitting there. He texted me a photo—Is this your gun?!? Then he pulled it the final 30 miles to the ski jumps.

As a ski jumping mom, I’m always surprised and humbled by the way that people in this community help and support us. From finding coaches to getting equipment to giving advice on our construction project, and of course, the snow gun, we have been blessed time and again by the generosity of the jumping community. Three of our four jumping hills are already open and kids are jumping because of that snow gun. History will not repeat itself this year, and for that we are deeply grateful.