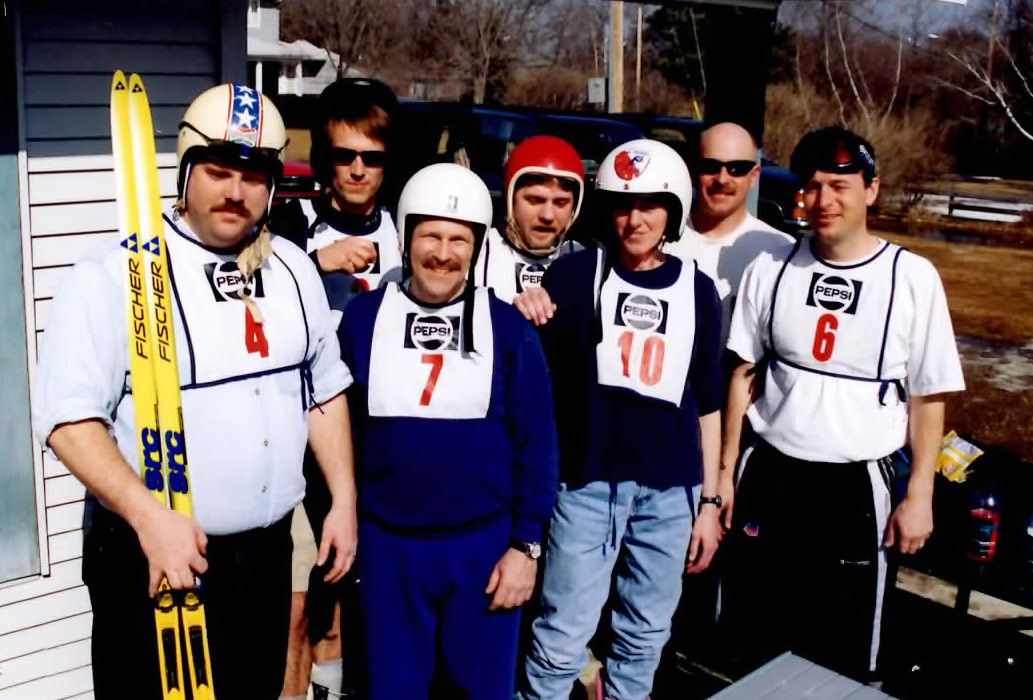 WHEN THE INMATES RUN THE ASSYLUM- parent competitors at the annual Slush Cup in Eau Claire, WI where kids run the tournament.  Competitors from L-R:  Paul Jastrow, Paul Loomis, Eli Gottfried, Rob Root, Kim Depringer, Tim Anderson, and Dan Mattoon.  This appears to be the “before” picture.

It was a cool, crisp 30 degrees out when I arrived at the venue. You couldn’t ask for better weather to start your ski jumping career. Forecasts called for clear skies and rising temperatures. It was the annual Flying Eagles Slush Cup, where the athletes run the tournament and the parents jump. As the kids were out raking the 10 meter landing hill and re-icing the in-run, I was focusing on picking out the right equipment to pull out the victory. I was psyched.  It wasn’t long before we received our competition bibs and we were heading up the hill. I was seeded to jump third and I was patiently waiting my turn by the start gate focusing on my first jump and setting my PR.  When my time came, I looked down the in-run and told myself, “stay on your skis, focus on balance, do my best and above all things, kick Mattoon’s butt”. I got on the bar, took a deep breath and lifted off the bar. Down I went.

Everything went great (for the first ten feet), then my mind shouted, “What are you doing? You are going too fast! Slow down.”, At that moment, I leaned back in my skis and slid down the rest of the inrun. Boy was I embarrassed. But everyone was very sympathetic. In order to make me feel better, my son, Zach, who was Chief of Comp, Chief of Inrun and Judge, quickly yelled, “Nice Jump Dad!”, All my fellow competitors were also quick to offer advice on such topics as how to walk back up the hill, how to wait longer before trying to stop, and my favorite, you just jumped as well as the guy on ABC Wide World of Sports. Very valuable input.

After about a 15-20 minute delay to get the track fixed, the round continued and it appears that I was leading, since the second round order had me going last. Woo hoo!!! (only thing strange, was that everyone else was still in the same starting order as the first round). After watching everyone else take their second jump, I got on the bar and told myself, “OK, Mattoon went far, but he did the splits in the air, so I can still get him on style, Have one and win this thing”. Everyone was watching intently, Markers were standing by, ready to mark the winning jump. I was psyched. I lifted off the bar and down I went.

This ride was much better. I was able to beat my previous PR by about 5 feet and just made it to the bottom of the inrun before laying back on my skis. Competition Over. Now it was in the Judges hands on how well they liked my style.

Everyone proceeded to the chalet to wait for the results, but I wanted to improve on my PR, so I went back up to the top of the jump. Thinking that no one was watching, I strapped on the lumber and got on the bar. I said to myself, “have 1” and left the bar, down I go. Boom!!! I make it to the takeoff and jump. (Ok, for the record, I rode the landing, but it’s been long enough that I feel I can start embellishing a little.)  I land about 5 meters down the hill! and I’m pumped! But then my mind starts to scream “Oh crap!!!”. Remember back when I said the forecast called for rising temperatures? Well, by this time in the day, the temps were in the mid 60s and the outrun had turned into a huge pond from the melting snow. Even though I was panicking mentally, physically, I remained calm. I knew that one has to add water to a plastic hill to remove friction, so I figured that I just needed to ski through the pond and I will be fine. WRONG!!! Immediately after touching the leading edge of the pond, my skis stopped, but my body kept going. My first face plant. Boy was that water cold. But thank God, no one was watching. Or so I thought until our annual banquet, when the jump was played over and over again. Who would have thought that I would make the season’s highlight reel?

After that day, I decided to hang up my skis and focus on other aspects of the sport. But I will leave that for another story.